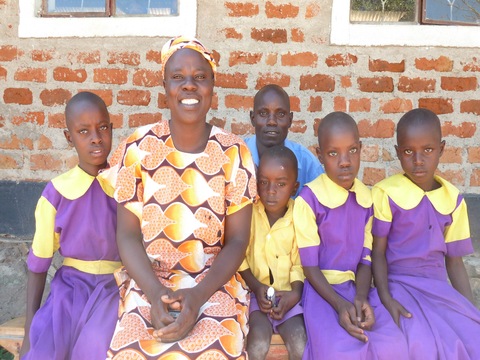 Maurice and Joyce Soita were able to send their four children to school after becoming One Acre Fund members. Photo by Fred de Sam Lazaro.

Most international aid agencies are headquartered in major cities: New York, Geneva or Nairobi. But One Acre Fund chose a rural location in the Kenyan town of Bungoma, and founder Andrew Youn is convinced this is a significant factor in the extraordinary growth they’ve enjoyed — 5,000 farm families in 2006; 125,000 in 2012.

Youn says living here is the best way to learn about how life unfolds — day in and day out — for impoverished smallholder farmers, people his organization treats as customers, not beneficiaries. Any business thrives when it can listen and truly understand the lives of its customers in order to better serve them.

Although it’s a nonprofit driven by compassion, One Acre Fund is clinically business-like in approach. It offers farmers a package of goods and services offered more commonly to industrial-scale farmers like those in the West: credit, good-quality seeds and fertilizer (along with instructions on how to use them) and insurance. In exchange, customers are expected to pay back their loan obligations by harvest time.

The repayment rate — 99 percent — does not surprise Youn. On average, One Acre Fund farmers triple their yields and are eager to meet their obligations. It’s the first time many have been accorded the dignity of being called a customer.

Youn, 33, the son of Korean immigrants who grew up in St Paul, Minn., is surprised by the relatively tiny investment it has taken to transform the lives of his customers, who were mired in Bronze-age technology, he said.

On a tour of a large warehouse in which One Acre Fund stores the supplies it procures for its 125,000 members, Youn pointed to a fifteen-foot-high stack of seeds that will be delivered to farmers.

“That stack of bails is enough to change the lives of thousands of farm families, with more than 10,000 children living in those families,” Youn said. “The sheer magnitude of what we can accomplish from a humanitarian perspective with very little resources is just staggering.”

In the coming year, Youn said, One Acre Fund farmers will have enough surplus to feed one million individuals for a full year. Most of that bounty will be sold, allowing farmers to invest money in other basic necessities. For most families, that means sending children to school instead of the field or, worse, a job.

School is by far the top priority for One Acre Fund farmers. Grace and Maurice Soita had little more than primary educations but they are excited that their children are excelling in the classroom. Their daughter, Eliam, is the top-ranked student in her class and wants to become a doctor, her mother tells me excitedly.

Fred de Sam Lazaro’s report is part of the Food for 9 Billion project. Food for 9 Billion looks at the challenge of feeding the world in a time of social and environmental change. It’s a NewsHour partnership with the Center for Investigative Reporting, Homelands Productions and American Public Media’s “Marketplace.“