Anthony Bourdain was polite but intensely reserved. Until we started the interview, he barely said a word.

It was the summer of 2016 and we were interviewing him for our Brief but Spectacular video series at our co-working space in Los Angeles. Earlier, his publicist had requested instructions for finding parking; Bourdain was a celebrity who drove himself and moved around without a gaggle of handlers. He showed up on time and alone.

Bourdain had that unusual ability to be utterly original on television.

At 6’4″, Bourdain was an imposing presence, and the less he said the more I rambled. I explained how our shoot would work and when it would air, forgetting how banal this information might sound to a man who had logged hundreds of hours traveling and eating his way around the globe.

I asked that he stand, look directly into the camera, and to please try and bring as much context to his answers by repeating the question.

To this last request, he complied brilliantly:

“How did I get from, you know, dunking breaded clams in hot grease to where I am today? F**ked if I know.”

That set the tone.

Anthony Bourdain, who was found dead June 8 of an apparent suicide at age 61, had that unusual ability to be utterly original on television. He was forthcoming about his life — setbacks and success — and showed both humility and hubris.

On his long battle with substance abuse and addiction, he painted this vivid self-portrait:

“I wanted to become a heroin addict. I was very proud of myself when I first shot up. I was a vulnerable, goofy, awkward guy whose only success socially was to be the baddest guy in the room. Ultimately, however, you wind up a whiny, pathetic, needy person.”

Bourdain was far more generous and reflective than we could have hoped. When the interview finished, he visibly retreated into a quieter version of himself.

While taking down the gear, Tony, as he insisted we call him, warmed up to us considerably. He was proud of an upcoming Parts Unknown episode in which he ate his way through LA’s Latino communities. In an example of how his work increasingly crossed over into political dialogue, Bourdain used the episode to examine the vital role LA’s undocumented immigrants play in industries around the city.

When the interview finished, he visibly retreated into a quieter version of himself.

Throughout his career, Bourdain always reeked of authenticity. He seemed intolerant of nonsense. He seemed to be genuinely proud of his work and grateful for his success. To me, he looked exhausted too, and I remember feeling slightly guilty for having him amp up another charming and irreverent version of himself for the purposes of our show. Of course, he had books to sell and shows to promote. But still, it all must have come at a price.

Revisiting our meeting, on the news of his death, makes me consider the parts of ourselves we choose to make public and how that image holds up against who we really are. Our brief encounter revealed a low-maintenance, thoughtful and shy man with a gift for truth-telling on TV. He will be missed and we were so grateful for his time. 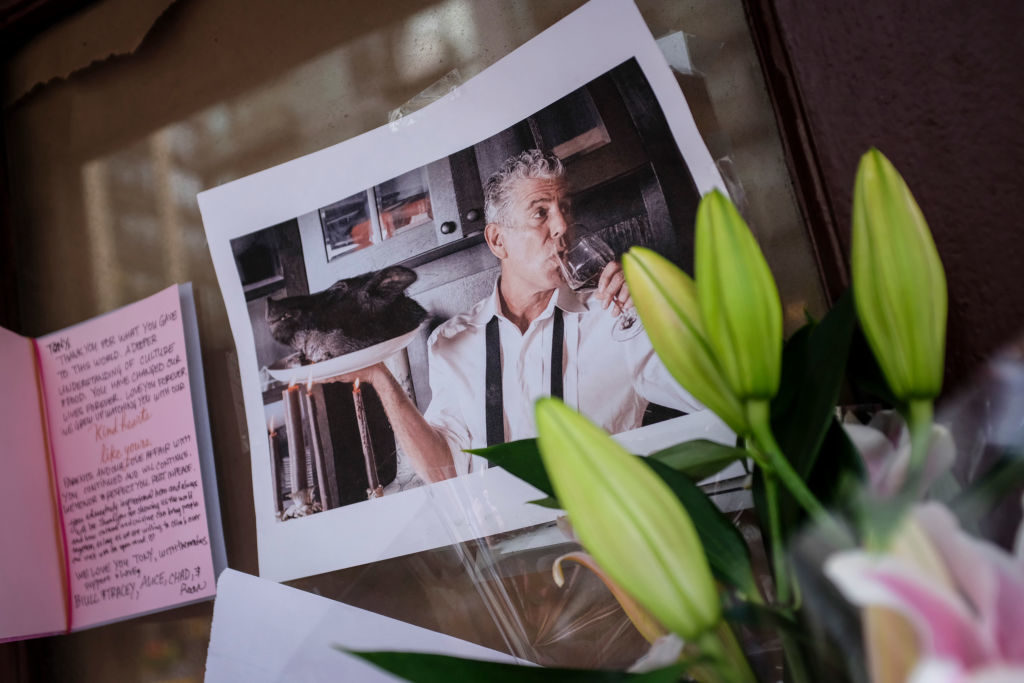 Notes, photographs and flowers are left in memory of Anthony Bourdain at the closed location of Brasserie Les Halles, where Bourdain used to work as the executive chef in New York City. Photo by Drew Angerer/Getty Images

Left: Anthony Bourdain gave the PBS NewsHour his Brief but Spectacular take in 2016.

Steve Goldbloom is a producer and series creator of "Brief but Spectacular."