Richard Rowley and Jeremy Scahill are both war reporters who have been covering America’s military presence in Iraq and Afghanistan for more than a decade. During their time in Afghanistan, they began to notice a trend of night raids on Taliban members. Dozens would be killed or captured, but there wasn’t any more information in the two-line press release than that. 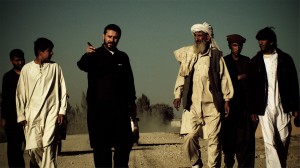 “We were seeing on the ground in Afghanistan a covert war eclipsing a conventional war,” Rowley told chief arts correspondent Jeffrey Brown.

“By 2010, more Afghans were being killed or captured by these covert forces and covert missions that we knew nothing about than by the entire 200,000 strong NATO force there. So this was clearly a huge story, a huge hidden story.”

Rowley and Scahill joined forces to tell what was happening on the ground. That snowballed into a documentary, “Dirty Wars,” now nominated for an Oscar.

Watch the trailer for “Dirty Wars.”

The film opens with the investigation into one night raid in the city of Gardez, in eastern Afghanistan. That raid, which led to the deaths of pregnant women and a police commander, wasn’t perpetrated by NATO troops but rather by a covert unit called JSOC (Joint Special Operations Commander).

“That revelation that this was an elite group who was supposed to do hostage rescue missions, things like that, was kicking down the doors on farmers in the mountains in Afghanistan without any transparency, without any access for journalists, without any real oversight — we decided to try and trace what JSOC was doing around the world, and that story took us to Yemen and to Somalia.”

But filming in Afghanistan, Yemen and Somalia isn’t easy, especially when undertaking an investigation like this. Rowley and Scahill tried to remain as invisible as possible. They grew out beards, wore local clothes, and tried to be back before sunset because the Taliban takes control of certain roads at night. Somalia was even more difficult.

“Somalia is the most dangerous place I’ve ever filmed in my life. There we couldn’t possibly fly under the radar,” said Rowley. 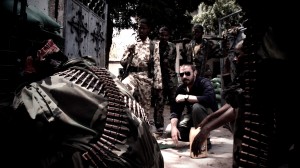 The investigation became a journey the two reporters never expected.

Even though Rowley and Scahill were unaware of what they might uncover, it was a story Rowley felt needed to be told.

“I set out to make a film that was passionately committed to the real and the powerful and the true, that was a real piece of journalism … the most powerful thing that we can do is to make the war real to people.”

“Dirty Wars” is nominated for Best Documentary Feature at the 2014 Academy Awards. The film is currently available in select theaters and is streaming on Netflix and on Amazon. Tune in on March 2 to see how the film fairs.