Artists and citizens in North Austin collaborate to paint fences with the phrase “beauty will save the world” in various languages, reflecting the 30 languages spoken in the neighborhood. KLRU, Austin public television, went to North Lamar Boulevard to check out this effort to beautify the area and help build community spirit. Video produced by Galia Farber and Eve Tarlo, shot and edited by Jeffrey Buras

Rigel Thurston says he lives by a simple motto: “Beauty will save the world.” The 33-year-old realtor is now painting that sentiment — taken from Fyodor Dostoevsky’s novel “The Idiot” — on fences along Lamar Boulevard in north Austin, Texas. 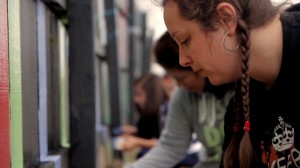 The Georgian Acres neighborhood, where the project is unfolding, is filled with mid-century ranch homes and low-income apartments that have been plagued by chronic crime. Residents are mostly blue collar — a majority work at construction, retail or restaurant jobs — and the median income is just over $21,000.

The neighborhood is also very international, with more than 30 different languages spoken. Thurston said he thought the fence project would be a great way for people to come together, even if they don’t speak the same language. “I do think that if we can learn to see the beauty in the people and places around us, we can make positive changes,” he said.

To highlight the diversity of the neighborhood’s residents, Thurston is painting the phrase in numerous languages. So far there are fences in English, Croatian, Spanish and Vietnamese, with plans for more in Chinese, Japanese, Arabic and even Dzongkha — the official language of Bhutan (“to greet Bhutanese immigrants who live in an apartment across the street,” Thurston said.)