Patsy Cline was Nashville’s darling. But she’s still an outsider in her hometown

Patsy Cline’s powerful voice conquered the music world long ago. But if you ask her family, she still hasn’t won over her hometown.

“She’s really not accepted in town,” said cousin Patricia Patterson Brannon, 77, as she baked three cherry pies in her Winchester, Virginia home — not far from where Patsy grew up. “That’s the way she had it growing up.”

“She’s really not accepted in town. That’s the way she had it growing up.”

Cline’s tenacity and talent come through in the upcoming PBS documentary, “Patsy Cline: American Masters,” which debuts this month (check local listings for dates and times).

When Barbara Hall set out to direct and produce the documentary three years ago, she was drawn to Cline’s story more than her prowess as a singer. Cline was an outsider who made good. Hall worked to tease that out as she researched Cline’s life and the songs she made famous, including “Crazy,” “Walkin’ After Midnight” and “I Fall to Pieces.”

“This is a woman who barely had an eighth-grade education, came from a single-parent home, worked to make ends meet to help feed the family, and still figured out how to work the music business,” Hall told the NewsHour. “To me, that’s a story that needed to be told.” 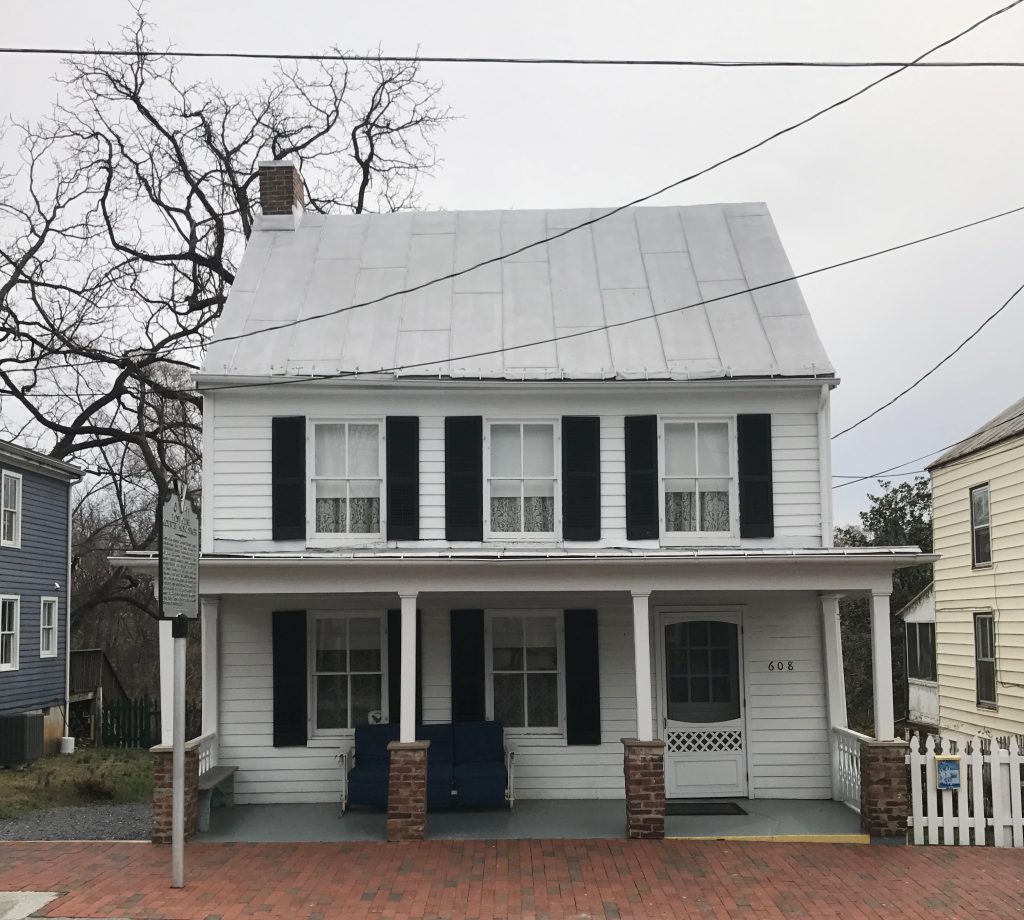 Country music legend Patsy Cline lived in this mid-19th century home on South Kent Street in Winchester, Virginia from age 16 to 21, when she made her break into the music industry. It was the longest she lived in any one place. Today, it’s maintained by the Celebrating Patsy Cline fan club. Photo by Laura Santhanam/NewsHour.

Born Virginia Patterson Hensley on September 8, 1932, a week after her 16-year-old mother married her 42-year-old father in the heart of the Great Depression, Cline moved with her family 19 times by the time she turned 16, looking for paid work. Then, her parents separated. Cline and her two siblings moved with her mother, Hilda Hensley, into a tiny white farmhouse without electricity or running water. It sat next to the railroad tracks on South Kent Street, a blue-collar neighborhood in Winchester, Virginia.

She enrolled in nearby John Handley High School but never attended. The reason was simple. Cline and her mother, a seamstress and maid who stitched Cline’s iconic cowgirl dresses, both had to work to keep a roof over the family’s head, Brannon said.

Cline’s life was set to the tune of a standard country ballad. She slit chicken throats in a poultry slaughterhouse, earning a paltry but steady paycheck until managers discovered she was underage. She cleaned buses at the Greyhound station and served chocolate uniques at Gaunt’s Drug Store in Winchester. But she lived for the nights when her mother drove her to sing in the honky tonks scattered from West Virginia to Washington, D.C.

“This is a woman who barely had an eighth-grade education … and still figured out how to work the music business. To me, that’s a story that needed to be told.”

On Saturday nights when she wasn’t singing for money, Brannon said Cline traveled to Brannon’s father’s farm 10 minutes outside of Winchester. There, neighbors strummed and plucked their instruments while they sang old country standards with Cline — even then her powerful voice could fill a room.

They took occasional breaks for homemade cookies and pie, but usually played until midnight, when Brannon’s mother reminded them all that church was in the morning. “‘You all can play one more song,” she’d warn. “But that’s it.’”

Country music was a way to pay the bills. But Cline got her big break at 24, with her 1957 performance of “Walkin’ After Midnight” on the Arthur Godfrey Show, the “American Idol” talent program of its time. She stole the show, along with everyone’s hearts, and made her way to Nashville. The music industry and a failed marriage changed her name to Patsy Cline, but to Brannon, she’ll always call her cousin Ginny.

If alive today, Cline would celebrate her 85th birthday this September. But history had a different story to tell. This Sunday marks the 54th anniversary of her death at age 30, after a plane crash in bad weather near Camden, Tennessee. She was on her way home to Nashville to see her husband, Charlie Dick — the “love of her life,” friends told Hall and filmmakers — and their two children. 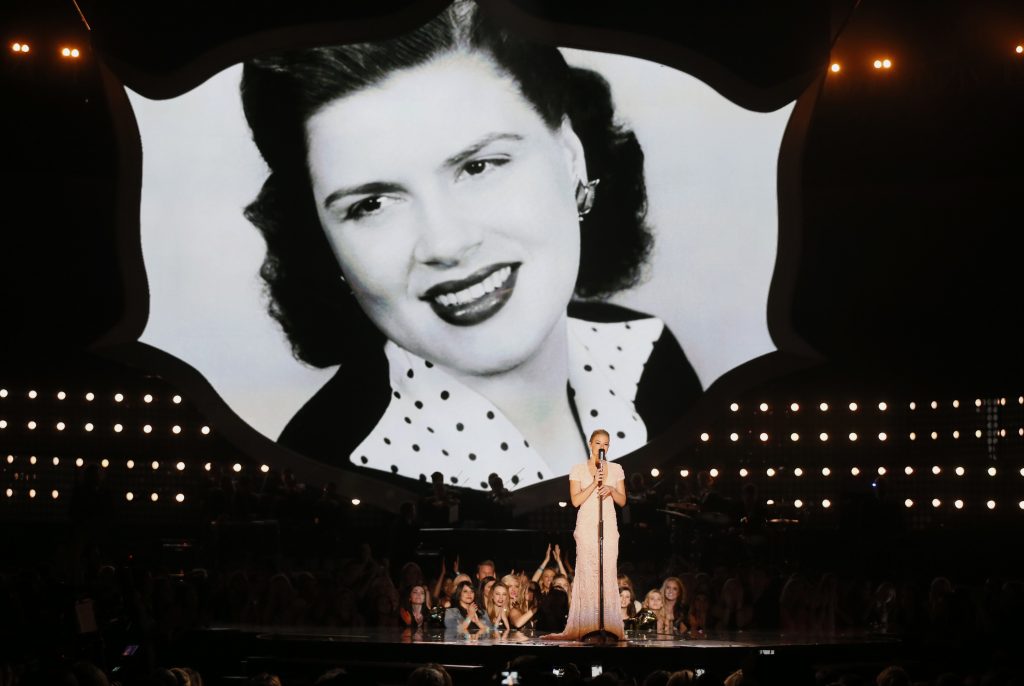 Leann Rimes performs a medley of Patsy Cline songs as Cline is projected behind her during the 4th annual American Country Awards in Las Vegas, Nevada December 10, 2013. REUTERS/Lucy Nicholson

In the years since her untimely death, Cline’s legacy lives on in the voices, songs and careers of generations of female musicians. Grammy Award-winning country music star LeAnn Rimes is one of them.

“When I heard her voice, it was so emotional for me, almost spiritual.”

Rimes, born in Mississippi and raised in Texas, channeled Cline’s deep, soulful notes in her 1996 breakout song “Blue,” set to a lonesome rockabilly beat. She said she still remembers the first time her father played Cline’s records. “When I heard her voice, it was so emotional for me, almost spiritual,” Rimes told NewsHour.

Rimes said each time Clines performed, she bared her heart “like a best friend confiding in you.” Inspired by Cline, Rimes says whenever she sings, she listens to her gut.

“Sing the truth,” Rimes said.“[I] sing it from the depth of my soul and heart as best as I can.”

Left: Country music legend Patsy Cline died at age 30 in a plane crash, but her life and voice continues to influence generations of artists. PBS American Masters will air its documentary about Cline, "When Patsy Cline Was Crazy," this month, starting on Mar. 4. Photo handout