Few people can name five female artists — can you?

If you can’t think of more, know that most people the National Museum of Women in the Arts spoke to for a recent Women’s History Month campaign couldn’t, either — even those who considered themselves art savvy. Ask someone to name five artists, they said, and many people will give you the names of men.

The museum, based in Washington D.C., approached strangers with the question as a way to highlight the work of women visual artists, as well as the persistent gender inequality in the art world.

“There’s not one reason” for the imbalance, said Amy Mannarino, director of communications and marketing for NWMA. “Historically, women were not allowed the same opportunities as men, such as to go to art school, or to paint from living figures,” like the nude model, which was key to an artist’s training. “But we now have more women in art schools than men, and they are still not getting as much opportunity,” she said.

Some startling statistics about the visibility of female artists today: Pieces by women artists often make up only 3 to 5 percent of permanent collections in the U.S. and Europe. Of 590 major solo shows held stateside between 2007 and 2013, only 27 percent were devoted to women, according to a survey by The Art Newspaper. And a famous and recurring billboard by the anonymous female art collective the Guerilla Girls — “Do women have to be naked to get into the Met. Museum?” — points out that as recently as 2012, less than 4 percent of artists in the Metropolitan Museum of Art’s modern art section were women (though there are many female nude paintings).

The Met says 11 percent of pieces currently on display in its modern and contemporary art sections are by women.

There has long been a gender imbalance at art galleries, too. In 1986, the Guerilla Girls released a report card showing that most of the major New York galleries showed only one or two women — if any at all. In 2015, Pussy Galore, a collective that also fights discrimination in the art world, released an updated report card that found representation at galleries had improved, but not by much. All but five of the 34 New York galleries surveyed had less than 50 percent female representation. Many had as low as five or seven percent.

The disparity is striking, but what’s behind the numbers is not so simple. The seminal essay on the topic, written in the 1970s by art historian Linda Nochlin, argued that the problem was partly systemic. Institutional power structures such as art academies, museums, galleries or other systems of patronage, she wrote, have long favored male artists in a way that made it “impossible for women to achieve artistic excellence, or success, on the same footing as men, no matter what the potency of their so-called talent, or genius.”

In 2015, curator Maura Reilly wrote in Art News that despite signs of progress since Nochlin’s essay, institutions were still dominated by white, straight, privileged men, which had far-reaching effects.

“[It] trickles down into every aspect of the art world—gallery representation, auction price differentials, press coverage, and inclusion in permanent-collection displays and solo-exhibition programs,” she wrote.

A just-released 2017 report by the Association of Art Museum Directors gives a face to these power structures. At museums with budgets exceeding $15 million, it found, men hold 70 percent of positions. Women fare better in smaller budget museums, and overall, women now represent almost half of all directorships. But they still make less money than men in those positions — on average about 73 cents to the dollar.

There’s something interesting going on with how the art world values work made by female artists, too. At auctions, work by men has long sold for more than women. The highest-selling work by a woman — a piece by Georgia O’Keeffe — went for $44.4 million in 2014, but dozens of pieces by men have sold for more than that. 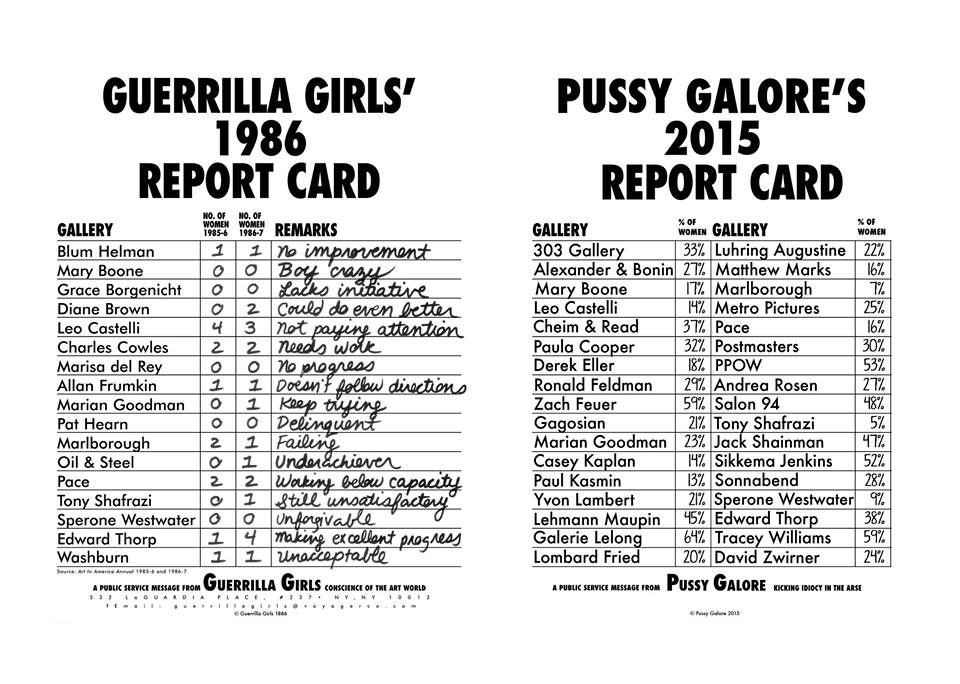 This may be because more art is often presented at auction by male artists than women– despite the increasing availability of female artists. Artfinder, an online art marketplace that attracts about equal numbers of male and female artists, found in a recent study that its female artists sell more art, more quickly, and for a greater total value.

“It’s still quite easy to find people in the high end art world whose opinion is that women artists just aren’t out there,” Jane Verity of Artfinder said. “But at least 50 percent of the art we have is from women. So it felt like we should start shouting about it.”

NWMA is shouting about it, too. Over the last month, its #5WomenArtists campaign has attracted participation from 500 organizations in 30 different countries. Among the female artists shared were Japanese artist Yayoi Kusama, currently on display at the Hirshhorn Museum in Washington D.C., Ukrainian folk artist Iryna Bilianska, Detroit photographer-activist Leni Sinclair and African-American visual artist and museum founder Margaret Taylor Burroughs.

To learn about more women artists, take our quiz above, or check out these artist profiles on NWMA’s site.

This piece has been updated to include numbers the Met provided about the number of women artists on display.