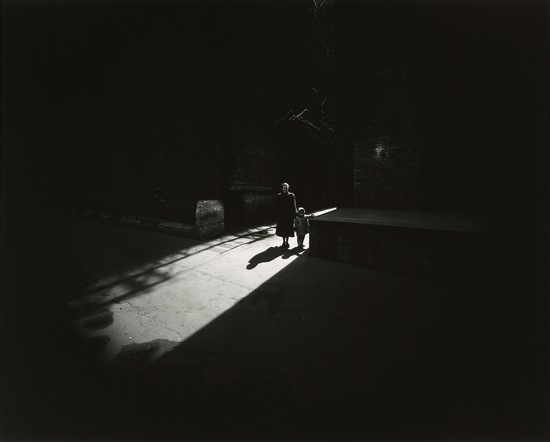 His photographs don’t enjoy nearly the same popular and iconic appeal as those of his one-time mentor Ansel Adams. But a new exhibition at the National Gallery of Art in Washington, D.C., is paying homage the under-appreciated yet innovative work of American photographer Harry Callahan.

Callahan, whose work is being honored to mark the centennial of his birth (he died in 1999), photographed cityscapes and natural landscapes, buildings and people, frequently his wife, Eleanor. He experimented with light and dark scenes as well as multiple exposures. Eleanor is sometimes against a city backdrop, sometimes as a smaller figure dwarfed by dozens of trees, sometimes nude.

His subjects changed as he aged, but in many ways his sensibility remained largely the same. He was known for being incredibly disciplined and a perfectionist. He shot photos every day, leaving behind more than 100,000 negatives and more than 10,000 proof prints.

The exhibition, “Harry Callahan at 100,” runs through March and features 100 photos given to the gallery by Callahan’s family.

Below you can check out a slide show of his work, including photographs of Eleanor and the way he used multiple exposures while trying to capture the sensibility of Detroit.

Art Beat also talked to Sarah Greenough, the senior curator of photographs for the National Gallery of Art, about Callahan’s work. A transcript is after the jump.

What was unique or different about Harry Callahan for those who aren’t familiar with his work?

Callahan was really an exceptional individual and an exceptional photographer. He merged the European modernist love of freewheeling experimentation with what one might think of as the American celebration of the natural world to create really highly original art. I think what’s even more extraordinary about him is that he was almost entirely self-taught. He fell into photography quite early in his life and just became more and more fascinated and intrigued by it. He met key people who helped in his development and really fashioned into one of the most innovative artists in photography in the 20th century.

Our readers can see this for themselves in the slide show accompanying our conversation, but tell us a little bit about some of the themes that he explored.

Almost from the very beginning of his career in the late-1930s, early-1940s he really defined the subjects that he would explore over and over again for the next 50, 60 years. These include his wife Eleanor and their daughter Barbara, nature and the city. He found these subjects to be a source of seemingly infinite fascination and inspiration, and he would continue to explore all of them up through the 1990s.

When he began to photograph, he pretty quickly learned about the work of the Hungarian-born modernist artist Laszlo Moholy-Nagy, who at that point was teaching in Chicago. Moholy-Nagy believed that photography could reveal a whole new way of seeing the world, and Callahan quickly began to explore those ideas and to experiment extensively with making multiple exposures, moving his camera while he made the exposure, making extreme contrasts, for example. Many of his earliest views of the city, particularly those made in his hometown of Detroit, really extraordinary multiple exposures of the city itself.

What’s even more distinctive about Callahan’s photographs, though, is that the multiple exposures were made in the camera; he didn’t superimpose one negative over another in the darkroom, but instead he would make two, three, four exposures in his cameras, relying to a great extent on his intuition, the extensive practice that he had with photography to create these images that really speak about the energy, the vibrancy of the city.

There are some that focus on nature, even in the urban landscapes. People can see this in the slide show, but one of them is a photograph in Chicago with trees and his wife Eleanor. Tell us a little bit about that.

In addition to being very influenced by Moholy-Nagy, he was also deeply influenced by Ansel Adams. He met Adams in 1941 and Adams was the person who really inspired in him this deep love of the natural world immediately around him. From Adams he also learned to make prints that were very clear and sharp and highly detailed. He photographed Eleanor both in the city but also in nature. The photograph that you are referring to of her underneath the canopy of trees is a really wonderful expression of how he has merged her completely into the natural environment, having the trees form a beautiful canopy up around her.

Eleanor was in many of his photographs, yes?

She was one of his favorite subjects. He photographed her from the late ’30s up into the ’90s. When people look at Callahan’s photographs of Eleanor, many might think of some more well-known portraits that photographers have made of their spouses or lovers — for example, Alfred Stieglitz of Georgia O’Keefe or Edward Weston’s portraits of Charis, his wife. Callahan’s art is distinctly different from that. He photographs Eleanor in a wide variety of poses: as mistress, as muse, as mother, as this ever present force in his life. I think as you look at a lot of the pictures of Eleanor, you can infer a sense of their relationship. It’s one that you can see is based on profound love, of course, but also trust and respect. Eleanor once said to me a wonderful comment about what it was like to be photographed by Callahan. She told me that she might be cooking or cleaning, doing something around the house and Harry would see a scene, interesting light that he thought looked beautiful or an arrangement of forms that he deeply appreciated. And he would say to Eleanor, “Take your clothes off.” Eleanor’s response to me was, “And that was that.”

You refer to kind of the slightly unusual way he came to photography. How did that come about?

He was born in Detroit and he briefly went to college, but decided it really wasn’t for him. He became a clerk at Chrysler Motors, and it was while there that he somehow stumbled into photography in 1938. He bought initially a fairly sophisticated camera, a twin-reflex camera that made two-and-a-quarter-inch negatives. This wasn’t a point and shoot camera, but one that required him to adjust numerous settings in order to make his exposure. And in order to learn more about photography he, like many other people at the time, joined a camera club. It was at that camera club that he was first introduced to Adams, and then through that camera club he met someone who knew about Moholy-Nagy’s work. That was really the beginning of his career. Up until 1946 he continued to work at Chrysler and do his photography on the side, but it became a total preoccupation for him. In 1946, Moholy-Nagy invited Callahan to teach at the Institute of Design in Chicago, and indeed he would stay there as a teacher until the early-1960s when he went to the Rhode Island School of Design and founded the photography department there.

To the broader public Callahan is not as well known as Adams or Stieglitz or Weston. What do you think people need to think about or know about Callahan?

In the exhibition we cover the full range of Callahan’s work, from his early work in Detroit up through pieces made in Chicago, and then follow him to Providence in the 1960s, and then in the 1970s once he retired from teaching one can see his photographs from all around the world. Many people have remarked that photography is often done best by people who are young, who are fast, who can instantly respond to a scene and capture it in their camera, that it is essentially a young person’s art. But with Callahan, you see how throughout his career he went back to these same subjects and explored them in new and different ways. You really see how Callahan made photography his life, but also how Callahan’s own life, his beliefs are reflected in his photographs. It’s a truly extraordinary accomplishment in that way, and really he made some of the most beautiful photographs in the history of 20th century American photography.