Photos: The power of community in post-Katrina Louisiana

In the Louisiana bayou, a constellation of small communities has worked over the course of a decade to piece together the remains of their homes and infrastructure. Tyrone Turner, a National Geographic photographer who grew up in New Orleans, wanted to capture a vital source of the area’s strength: the families that tie those communities together.

Turner, who worked for the Times-Picayune from 1990 to 1996, photographed the city shortly after Hurricane Katrina hit in August 2005, and after the BP spill, which devastated the area’s environment with the explosion of the Deepwater Horizon oil rig on April 20, 2010. He traveled back over the course of the last several years, documenting cleanup efforts and rebuilding along with local traditions and customs.

Turner said he has heard New Orleans locals described as “strong” and “resilient” by many media outlets, and he wanted to break down what those words mean on a daily basis in the lives of the people who have rebuilt New Orleans over the last decade. Throughout these disasters, the bonds between families and community have held the area together and helped it to move on, he said.

“I’m drawn to areas where … people are dependent on each other,” he said.

Check out more images from Turner below. 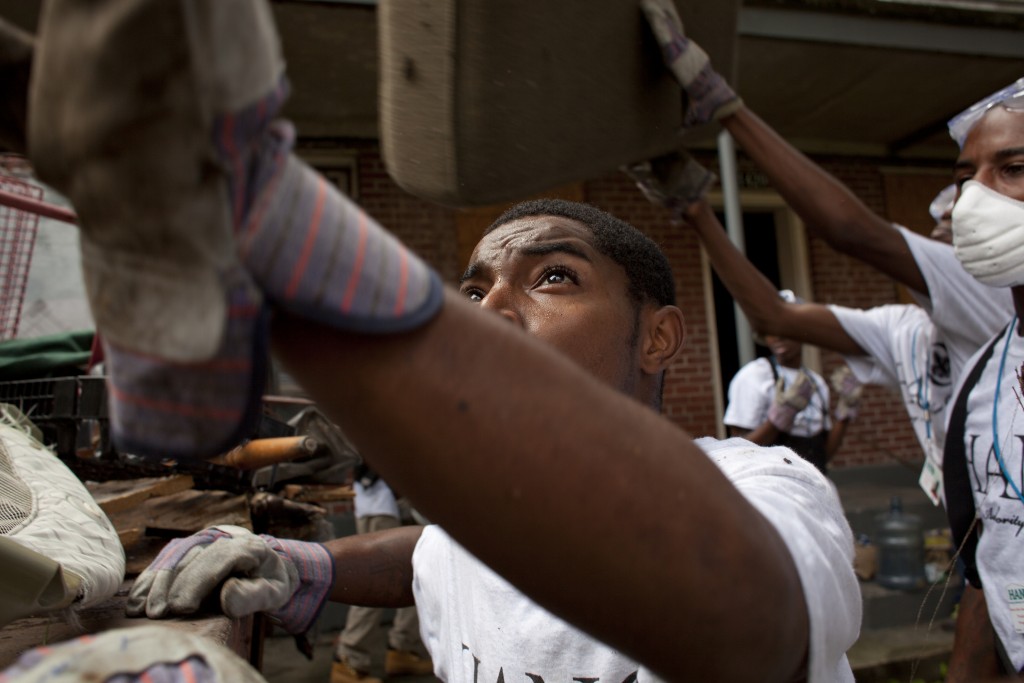 Part of a Housing Authority of New Orleans youth work program, young men and women clean out the Iberville Public Housing Development on July 14, 2013, before it was demolished. The Iberville was last of the older public housing projects that were razed amid controversy to make way for mixed income developments around the city. This housing strategy began before Katrina’s floodwaters inundated much of the city’s public housing, but much accelerated after the storm. Photo and caption by Tyrone Turner 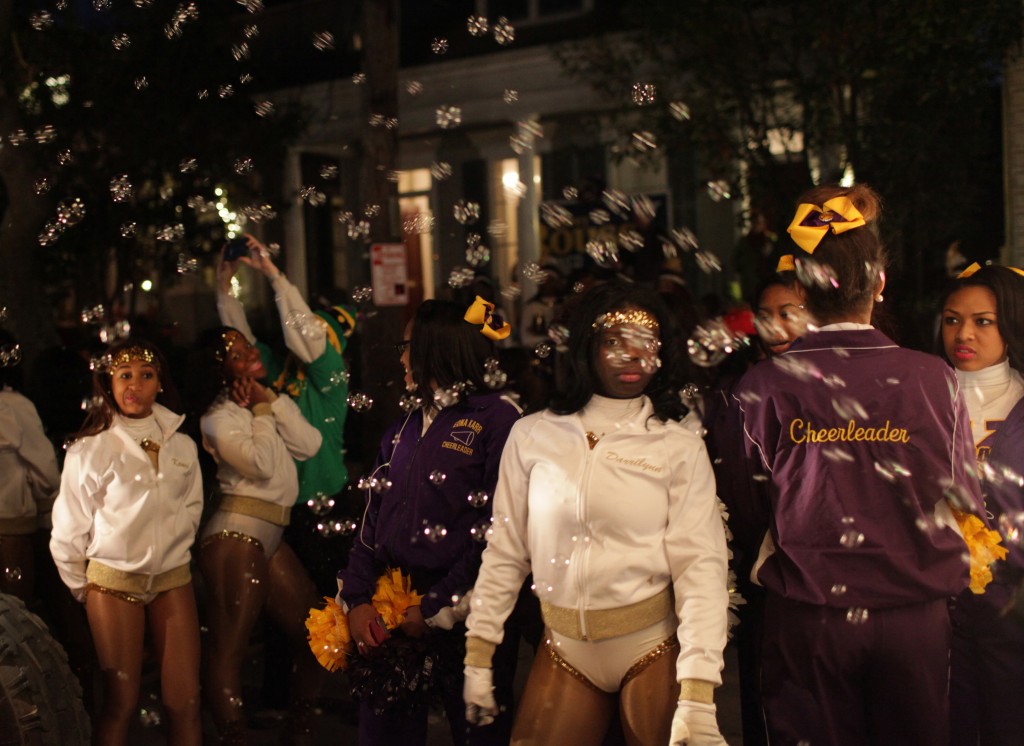 Cheerleaders from Edna Karr High School prepare for the beginning of the Krewe of Muses parade in Uptown New Orleans on Feb. 27, 2014. After Hurricane Katrina, there were debates about whether the 2006 Carnival should be held in the devastated city. In the end, a reduced Mardi Gras was held. Photo and caption by Tyrone Turner 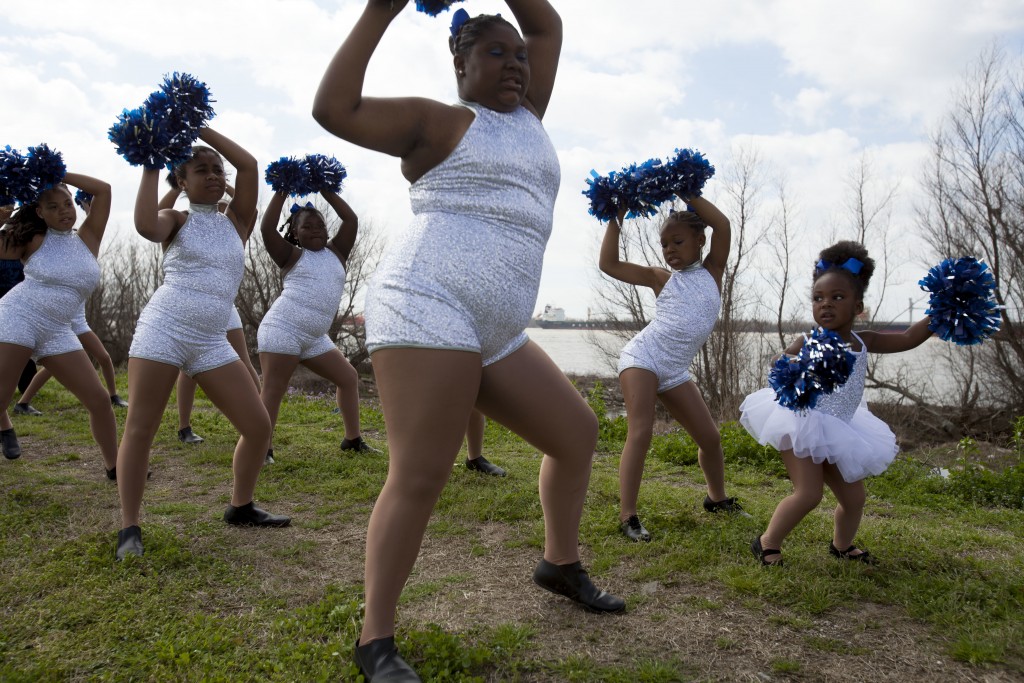 A local dance team practices on the Mississippi River levee in Pointe à la Hache, Louisiana, before their community Mardi Gras parade on March 2, 2014. These oyster fishing communities near the mouth of the river suffered a direct hit from hurricane Katrina and were severely affected by the BP oil disaster in 2010. Photo and caption by Tyrone Turner 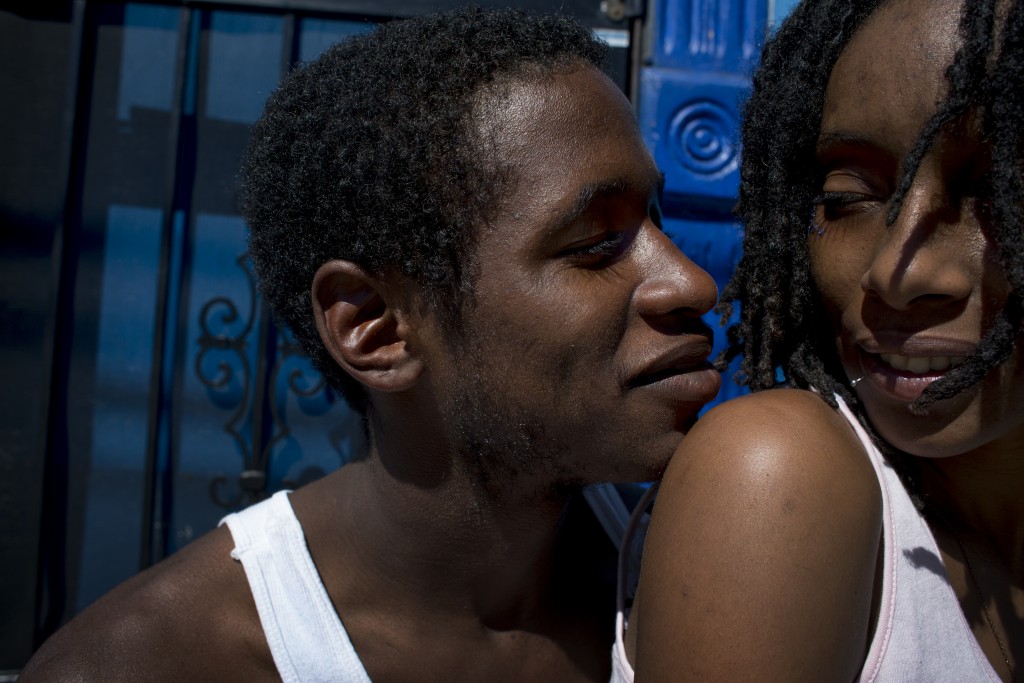 A young man and woman cuddle in front of the downtown New Orleans home as they wait for their bus to arrive on Oct. 14, 2014. Photo and caption by Tyrone Turner 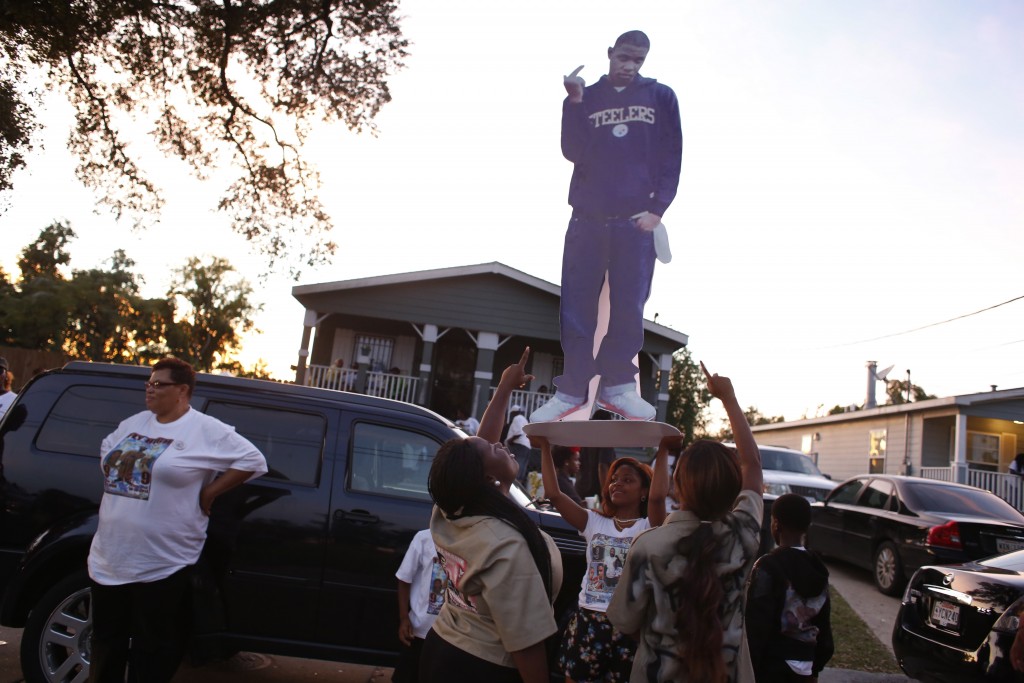 Friends and family celebrate the memory of Malik Braddy, 18, as they hoist a cardboard cutout of his likeness during the repast gathering in the Lower Ninth Ward after his funeral on Oct. 18, 2014. According to the family, Malik was murdered after a years-long feud with a rival high school student. Violent crime, a perennial problem in New Orleans, had been declining since Katrina. So far in 2015, however, homicides are on the rise in the city. Photo and caption by Tyrone Turner 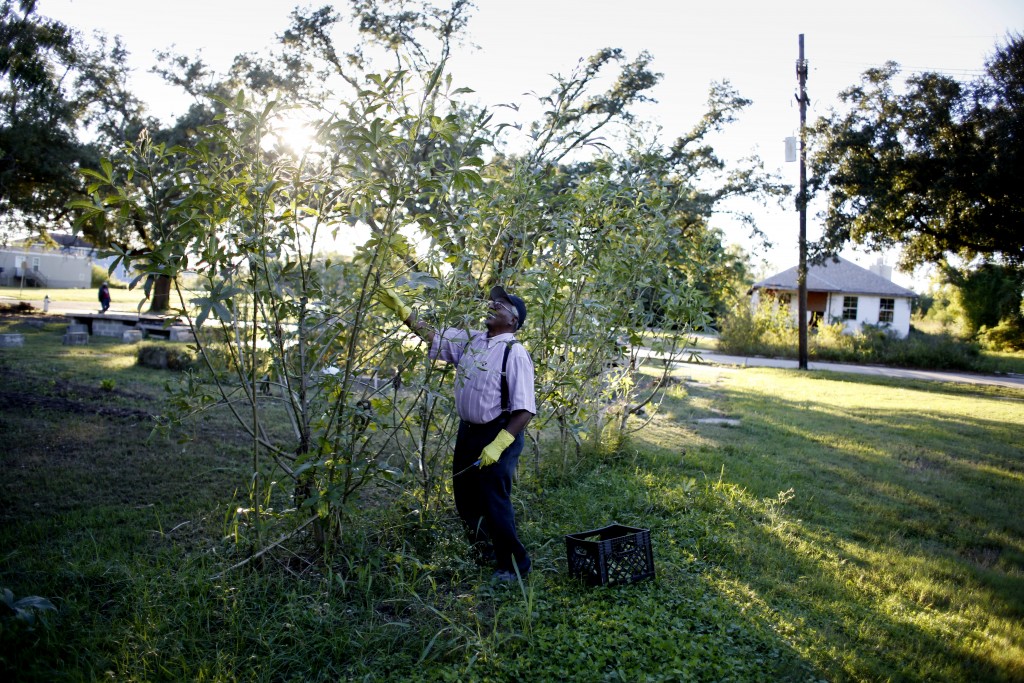 Henderson Hughes harvests okra in a garden he grows on the empty lot where his Lower Ninth Ward home had been before the flood waters of Katrina destroyed it on Oct. 15, 2014. Mr. Hughes moved to the Lower Ninth Ward in 1967. He now has a rebuilt home down the street, and uses this lot for his garden. Photo and caption by Tyrone Turner 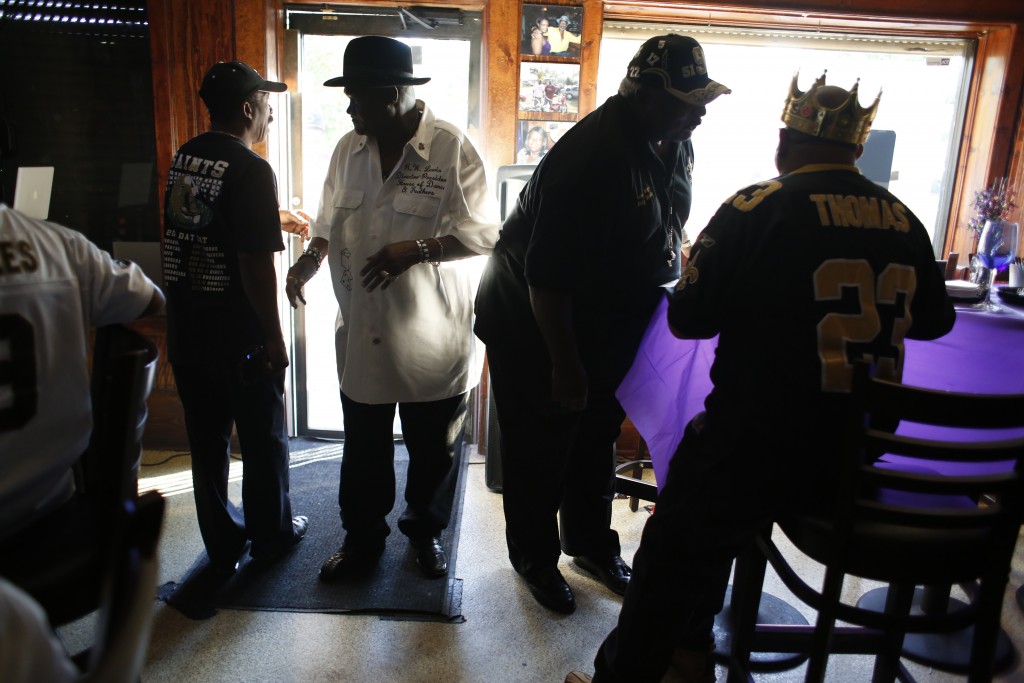 The Original Big Nine Social Aid and Pleasure Club hold their kickoff party in a bar along St. Claude Avenue in the Lower Ninth Ward on Oct. 19, 2014. Photo and caption by Tyrone Turner 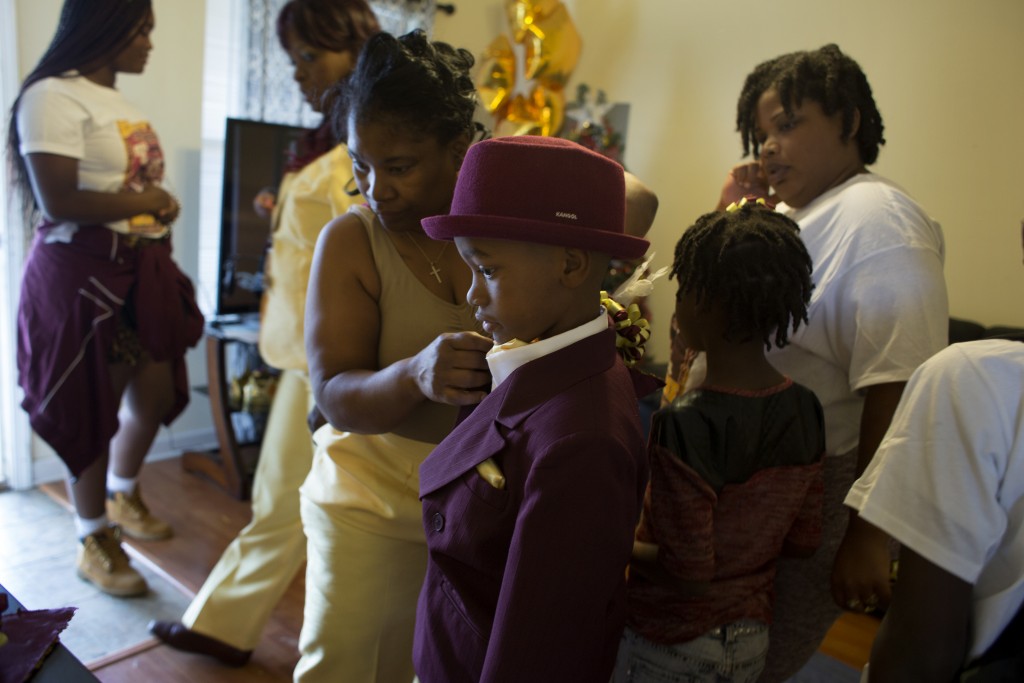 Edwina Waterhouse helps put finishing touches on her nephew’s outfit (Kerry Lee Francois, 9) at her Lower Ninth Ward home before the start of the Original Big Nine Social Aid and Pleasure Club’s parade on Dec. 12, 2014. Edwina was born and raised at this location immediately across from the Industrial Canal levee that burst under the weight of Katrina’s storm surge. After rebuilding her house, she lives with her family in the same location. Photo and caption by Tyrone Turner 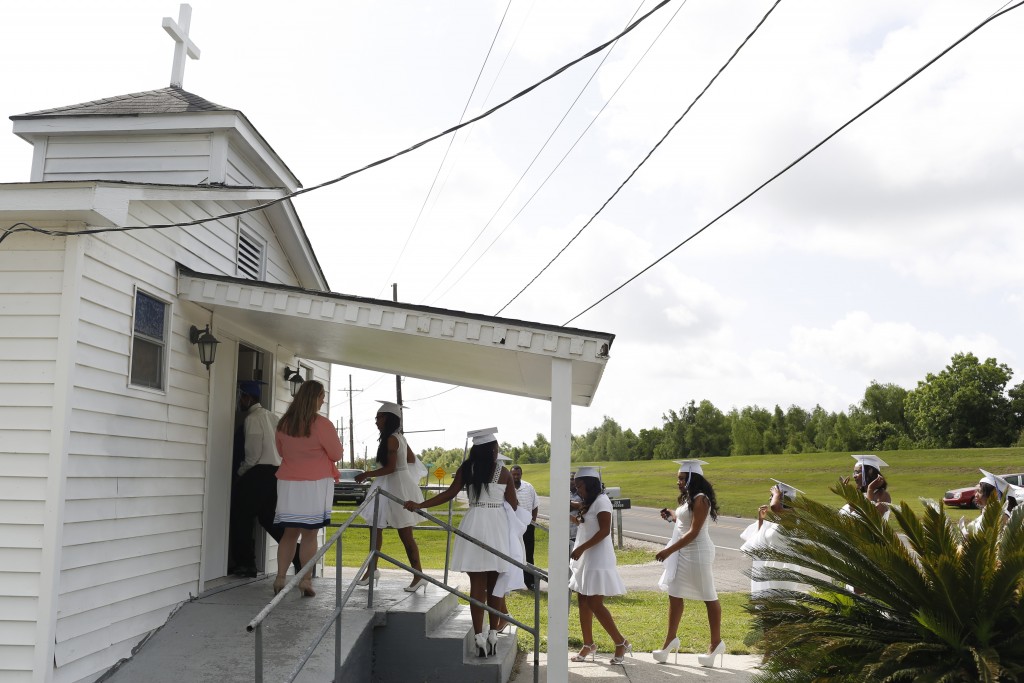 The graduating class of Phoenix High School enters the Zion Travelers Baptist Church for their baccalaureate service on March 17, 2015. Turner photographed the community of Phoenix, Louisiana, which lies along the Mississippi River below New Orleans, after Hurricane Katrina, from which it suffered almost complete devastation. According to Turner, the community has come back strong in the years since. Photo and caption by Tyrone Turner

Left: Shannel Battle, right, holds her 3-month-old grandson Levi Harvey, as family members Shannair Battle, 12, Dwayne Howard, 10, and Diamond Howard, 6, shower affection on the baby on April 13, 2015. Their town of Pointe à la Hache, Louisiana, located near the mouth of the Mississippi River, was completely devastated by Hurricane Katrina. The community of oyster fishermen was even more affected by the 2010 oil spill in the Gulf of Mexico. Their traditional oyster grounds have not come back. Photo and caption by Tyrone Turner