A dentist, a bus driver and a surgeon pop open a manhole cover and shimmy into the opening, abseiling into the depths of London’s sewer system. They’re not authorized to do this, mind you, but they’re determined. You see, they, and about a dozen other regular urban spelunkers, are on a pursuit to explore the world underneath the city, full of abandoned bunkers, shuttered tube stations and miles and miles of subterranean treasures.

The group, most of whom had lived together at the time, spent years sneaking into the many layers of London’s underground systems and came back with a collection of eerie, otherworldly photographs that comprise a new book from Bradley Garrett, “Subterranean London: Cracking the Capital.”

“All of these photographers in the book work full-time jobs,” said Garrett, who is a researcher at the University of Oxford. “They have normal jobs and then they have this kind of superhero identity on nights and weekends. And very often we would be out exploring and they would go straight to work with bags under their eyes and nobody had any idea that they had been running the tube all night while it was shut down.”

Garrett, an American, moved to London in 2008 and soon after was introduced to the world below the city. Someone popped a manhole cover and took him into a sewer and Garrett was amazed by what he saw.

“I started thinking, what else is down here?” 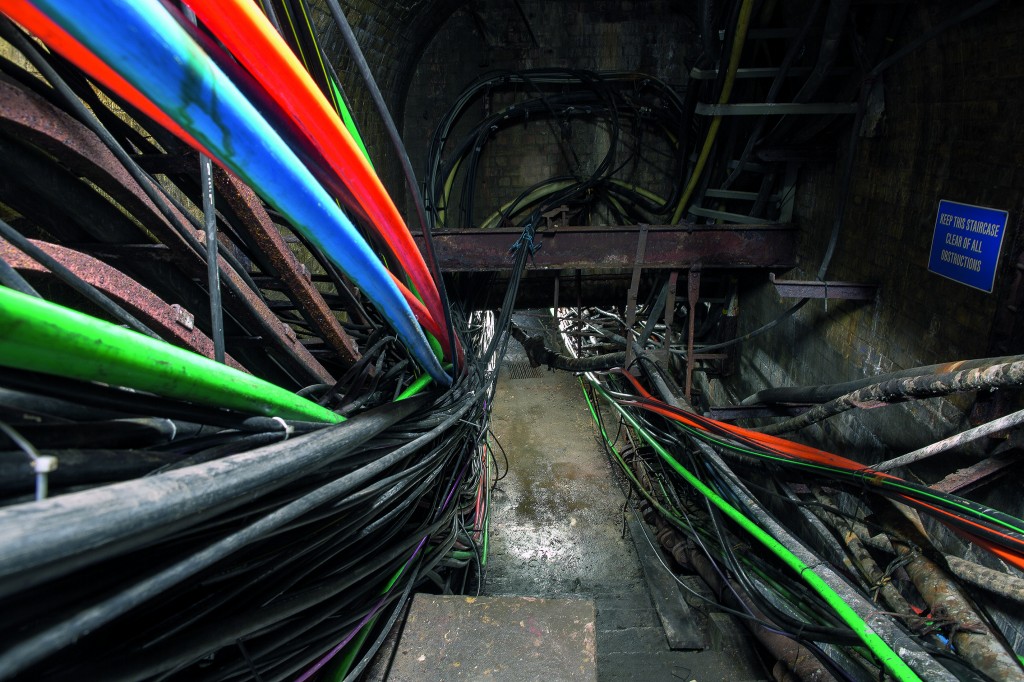 “The primary color coding of these cables and ducts delighted us and offered bright relief from the ubiquitously dark and drab surroundings in these riverside sections.” Photo from “Subterranean London: Cracking the Capital” by Bradley Garrett et al.

As the group began exploring, they soon found distinct “layers” under London, five to be exact. They explored in sewers and electricity tunnels and they located World War II bunkers and abandoned metro stations. They also came upon spaces of new construction where machines were boring through fresh ground underneath the city.

“In London (the different layers) are totally separated because it’s always been separate private companies building all of this stuff … Sometimes, you’re in an electricity tunnel and you can hear the tube train, you can feel the tube train going by you. There’s this rumble.”

The book is divided into chapters that mimic different spaces they found.

As they continued to explore, they developed more creativity and technical prowess in accessing some of the harder to reach layers. Since they didn’t have permission, they had to rely on their skills to get them through each space.

“Some of the layers are more difficult to get to than others…With the sewer, you can just pop a manhole. But, getting into the tube and getting to abandoned tube stations is really difficult.”

The tube is often about 65 feet underground. Garrett and his crew of explorers knew that these spaces needed ventilation to let in oxygen. In order to locate the entrances, they would smell vents around the city for train brake dust. If they smelled what they were hoping for, they would return in the dead of the night and rappel down into the tunnels.

“In the beginning we didn’t really have any particular technical knowledge … it was pretty basic publicly available information. Then as we were getting into layers that were trickier, we needed to learn how to use ropes,” said Garrett. “It just requires a kind of critical thinking, looking at the city like it’s a puzzle.” 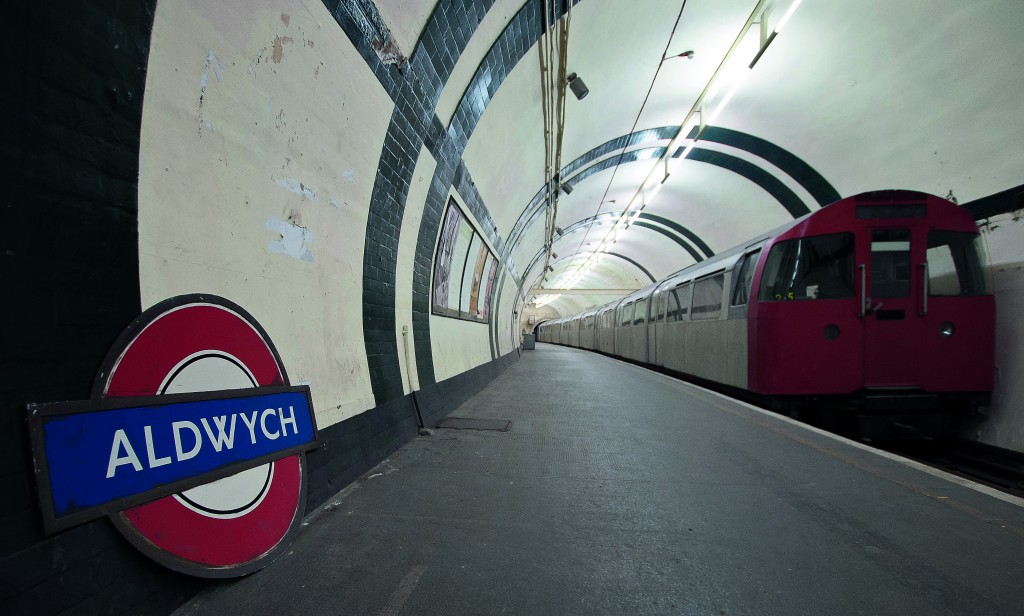 “The station closed in 1994 but had been used, like many stations, as an air raid shelter during WWI.” Photo from “Subterranean London: Cracking the Capital” by Bradley Garrett et al.

In instances where they wouldn’t be able to sneak in, they would dress up like construction workers, donning a hard hat, and cone off an area to re-route cars around the manhole.

“You don’t think it’s going to work and then you realize that no one cares if you just cone something off and go in. As long as you’re safe about it and you know what you are doing, it looks legit. Even the cops drive by and wave at you.”

One particularly challenging instance was their search for the Kingsway Telephone Exchange, a shelter constructed when the Germans were bombing London during World War II. The original shelter was connected to the tube so train passengers could escape into it.

After the war, the shelter was bricked up and left as vast empty chambers with lights, beds and canned foods, quietly sitting under the city.

Garrett and the other urban explorers had found every public bomb shelter except for this elusive one. It had disappeared until Duncan Campbell, a British journalist, discovered the Exchange in the late 1970s.

Campbell revealed that, during the Cold War, the UK government had converted the bunker into a telephone exchange to safeguard the country’s communications, should there be a nuclear attack. The government sent people to live in the bunker to maintain the communications and asked them not to leave frequently to preserve the secrecy of its entrances.

“Down in the bunker, you find photos on the walls of the bucolic, outdoor landscapes to keep people from going crazy underground. There was also a bar down there — this is a bar that’s 100 feet underground. It was the deepest bar in the United Kingdom. They had pool tables, in addition to beds and telecommunications equipment,” said Garrett. 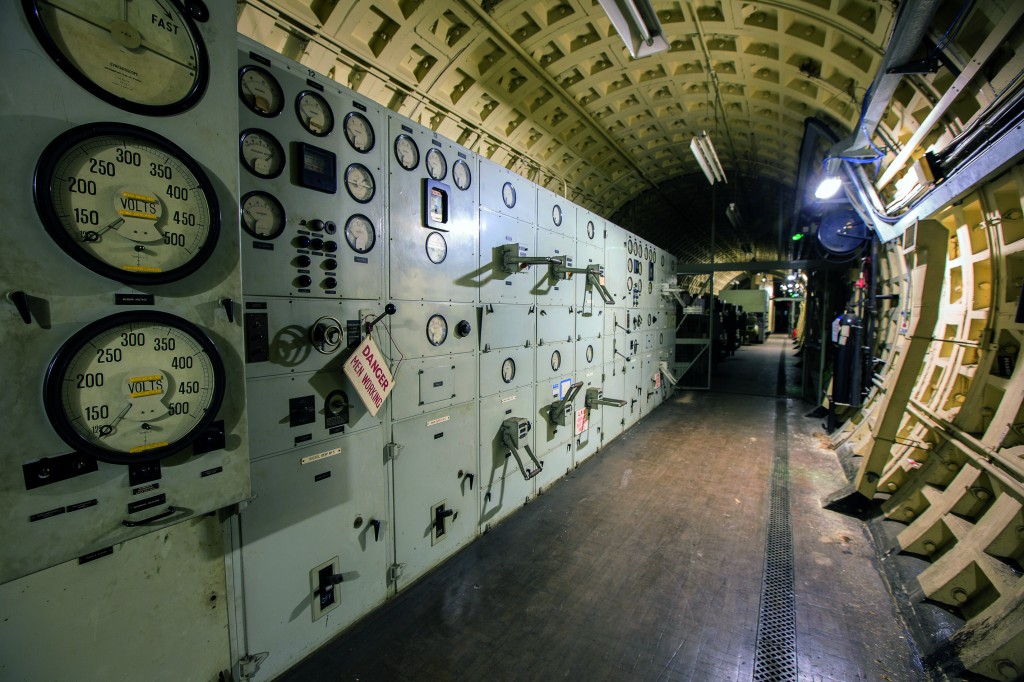 The enameled switch gear in the Kingsway Telephone Exchange, which was originally built as a shelter during World War II. Photo from “Subterranean London: Cracking the Capital” by Bradley Garrett et al.

It’s spaces like the Kingsway Telephone Exchange that are at the heart of what Garrett says his book is about. Even though they entered these layers without permission, the geographer feels it’s important for people to know what comprises the cities they live in. He likens urban exploration to computer hacking.

“A virtual system is a closed space very often. They are very strict rules about who accesses what and how you are supposed to access it, but a computer hacker who looks at the code behind those systems can understand where loop holes are and they can get through the loopholes to access the back-end of the system that you’re not supposed to see. That’s exactly what we were doing. We were looking at space walking around the city and thinking, ‘okay, what’s the underlining code here? How does this work?’”

Garrett claims to have explored about 300 underground locations in eight different countries. One hundred of those spaces are in London. While Garrett was never caught exploring, he did take photos and published the story in his Ph.D thesis in 2012. 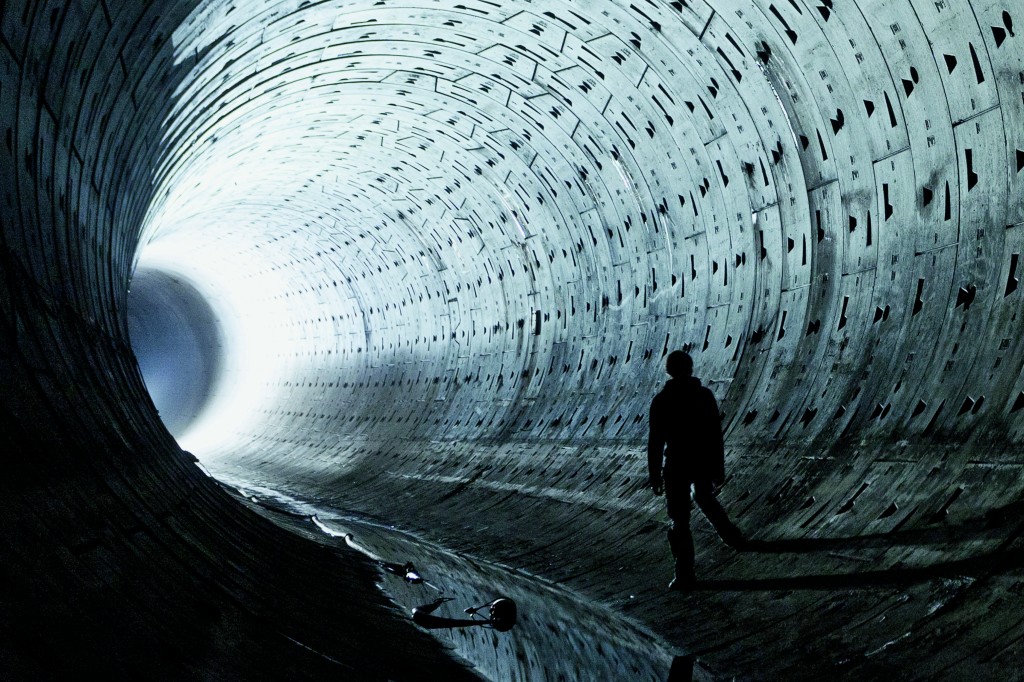 “We were awestruck by the scale of these new tunnels,” writes Garrett. Photo from “Subterranean London: Cracking the Capital” by Bradley Garrett et al.

On a flight back from a research project in Cambodia that same year, the British Transport Police stopped his plane on the runway, handcuffed him and dragged him off the plane.

“The home office took my U.S. passport and while I was in custody for about 24 hours, they took a battering ram to my front door and they confiscated my computers, my hard drives, my notebooks — basically everything I owned — they took from me.”

Eight months later, the geographer and the dozen other explorers were charged with conspiracy to commit criminal damages.

“What they said is they didn’t necessarily find any evidence that we caused criminal damage, but in exploring these places, we were reckless as to whether damage could be caused.”

The case was eventually thrown out against everyone except Garrett and one other explorer.

“I pled guilty to removing a board and putting it back, opening a window, taking a wing nut off of a door, and something I can’t remember … When the judge sentenced me, she just discharged the entire thing.”

“Cities are supposed to be spaces of encounters, spaces of exploration, right? You walk around and you explore the city and you find stuff and you encounter people. There are spaces of difference. Cities should always surprise us because that’s what you get when you mix up all those different times and different people and different places.”

But the geographer says that all that is changing, that cities are becoming more homogenous, less surprising spaces.

“(Urban exploration) teaches us that even if those are the kind of cities that are being built, we can still explore them — even they are being surveilled and controlled and owned by private corporations or companies. We can still sneak over the walls and past the cameras and have little adventures,” said Garrett.

“I find it sad that something that all came naturally to us as kids — exploring the environment we live in — suddenly you’re in your 20s or 30s or 40s or 50s and people find that threatening. It really shouldn’t be. We should all feel free to explore where we live.”