Photos: Inside the Florence lab saving priceless works of art

In the 14th century, Florence was the center of the Italian Renaissance, but after a devastating flood in the 1960s, it became something else: one of the world’s foremost centers of art preservation and restoration.

The PBS NewsHour traveled to Florence in late September to visit the Opificio delle Pietre Dure (OPD), the Workshop of Semi-Precious Stones, where restorers are working on Giorgio Vasari’s “Last Supper,” a 21-foot wood panel painting completed in 1546.

During the 1960s that painting and many others hung in Florence’s Santa Croce Church and museum, which sits just a few blocks from the Arno River. But in November 1966, one of Florence’s worst-ever floods sent water, debris and oil into the city, damaging and destroying thousands of artworks and manuscripts. Water in the church reached nearly 20 feet high, submerging the Vasari for more than 48 hours.

For more than four decades it sat in storage as conservators and restorers debated how to save the work. And now, as the 50th anniversary of the flood approaches, restorers hope to finish their work on the painting and return it to the Santa Croce museum.

Photos below at the OPD and the Santa Croce Church show the lasting impact of the flood as well as the work that happens at the OPD. Watch the NewsHour tonight for a report on the OPD. 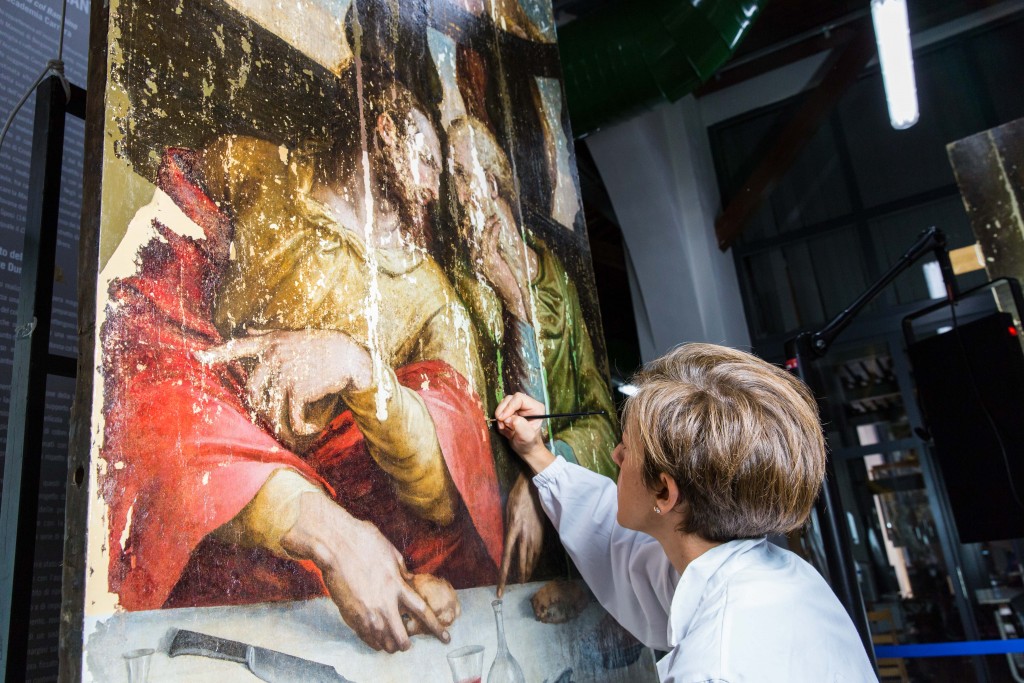 A conservator at the OPD works on restoring a panel of Vasari’s “Last Supper” nearly 50 years after it was damaged by a flood. The OPD began as a project of the Medici family to create the finest mosaic works, but following the flood, it made a turn towards conservation of works using the best available technology. Photo by Frank Carlson 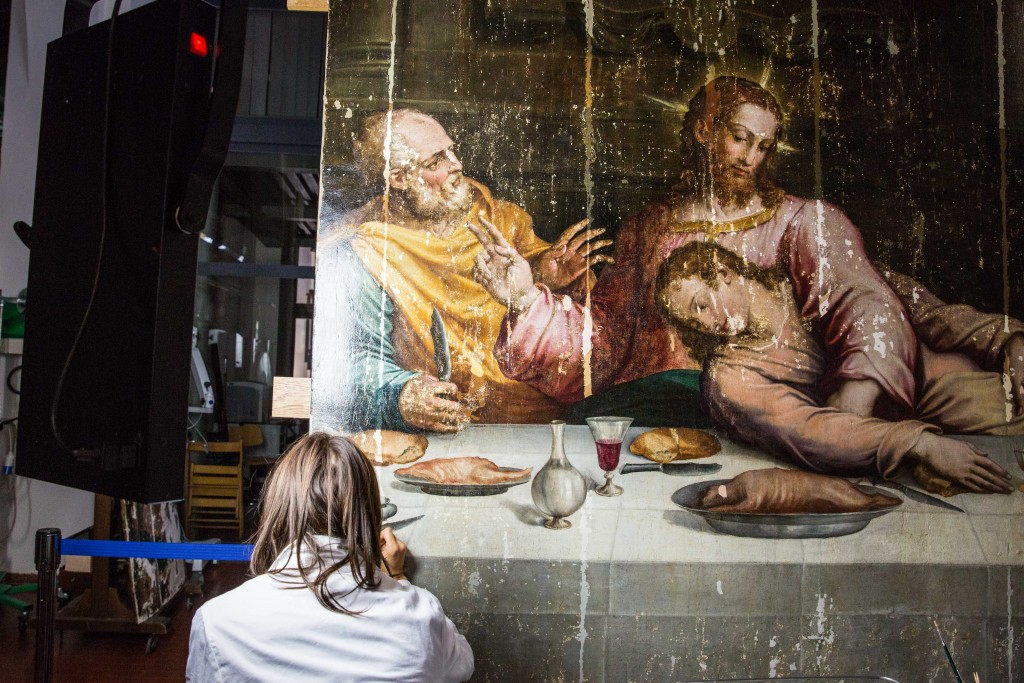 Another restorer works on the central panel of Vasari’s “Last Supper.” The painting sat in storage for more than 40 years after the 1966 flood while experts developed the skills and confidence to restore it in one piece. Photo by Frank Carlson 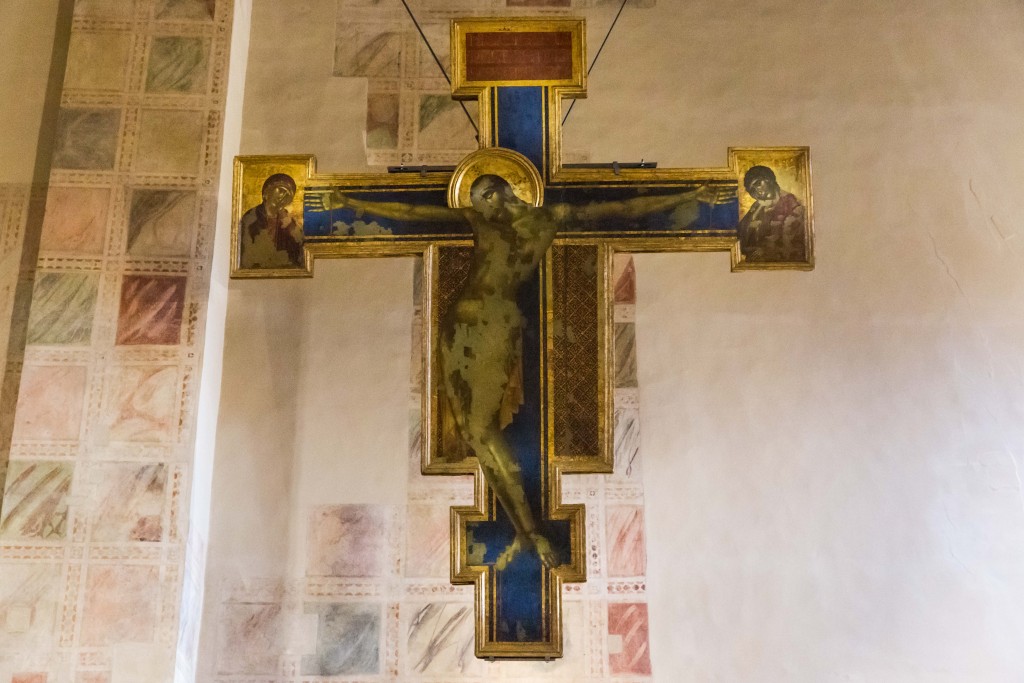 “Crucifix” by Cimabue hangs in the Santa Croce Church museum in Florence, Italy, just a few blocks from the Arno River. During the 1966 flood it was badly damaged, becoming a symbol of the flood. Another painting that hung in the Santa Croce was Vasari’s “Last Supper,” now undergoing restoration. Photo by Frank Carlson 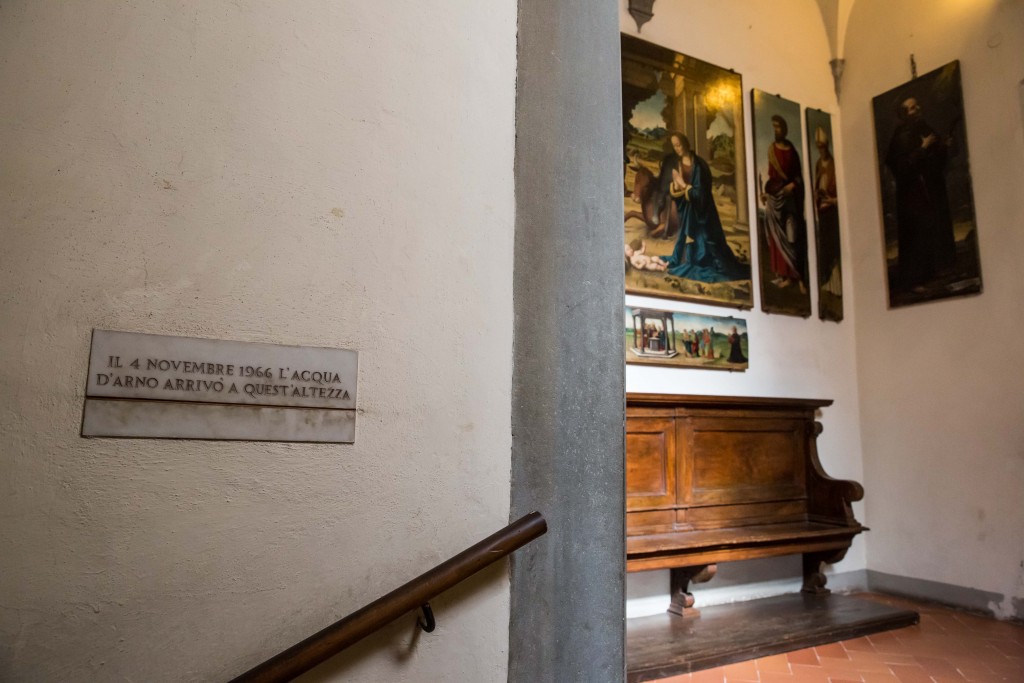 A sign on the second floor of the Santa Croce museum shows how high the water rose during the 1966 flood. Signposts like these can be found around Florence today. Photo by Frank Carlson 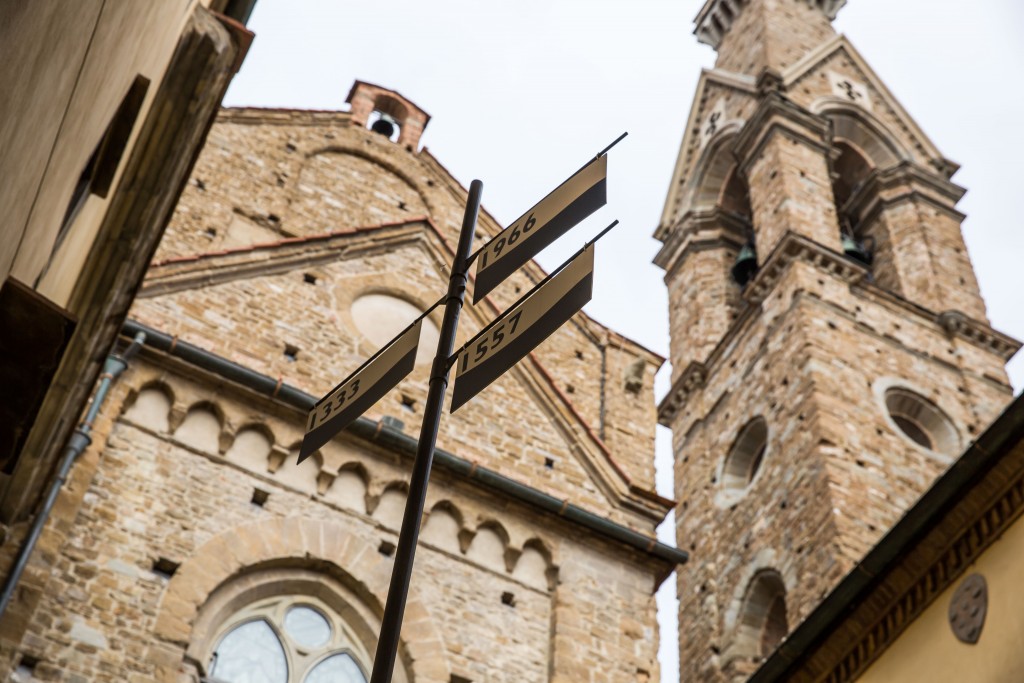 This sign in the Santa Croce Church shows the relative heights of three major floods in Florence. Photo by Frank Carlson 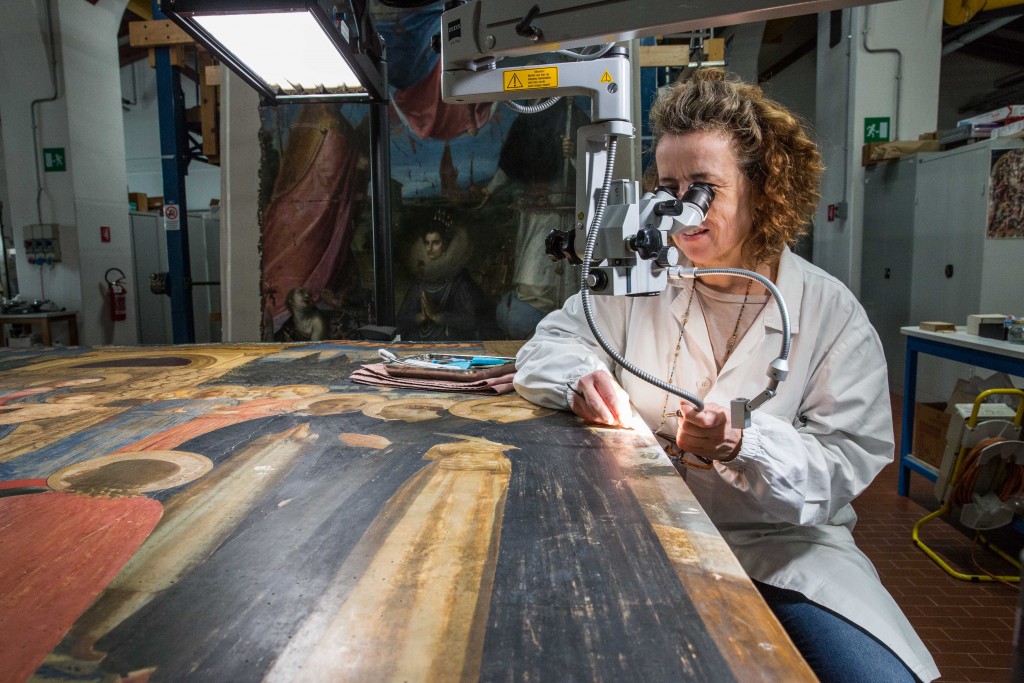 Caterina Toso cleans the “San Marco Altarpiece,” also known as “Madonna and the Saints,” a painting on wood usually found in the Museum of San Marco in Florence. Commissioned by Cosimo di Medici, it was completed by Fra Angelico in the mid-15th century. Photo by Frank Carlson 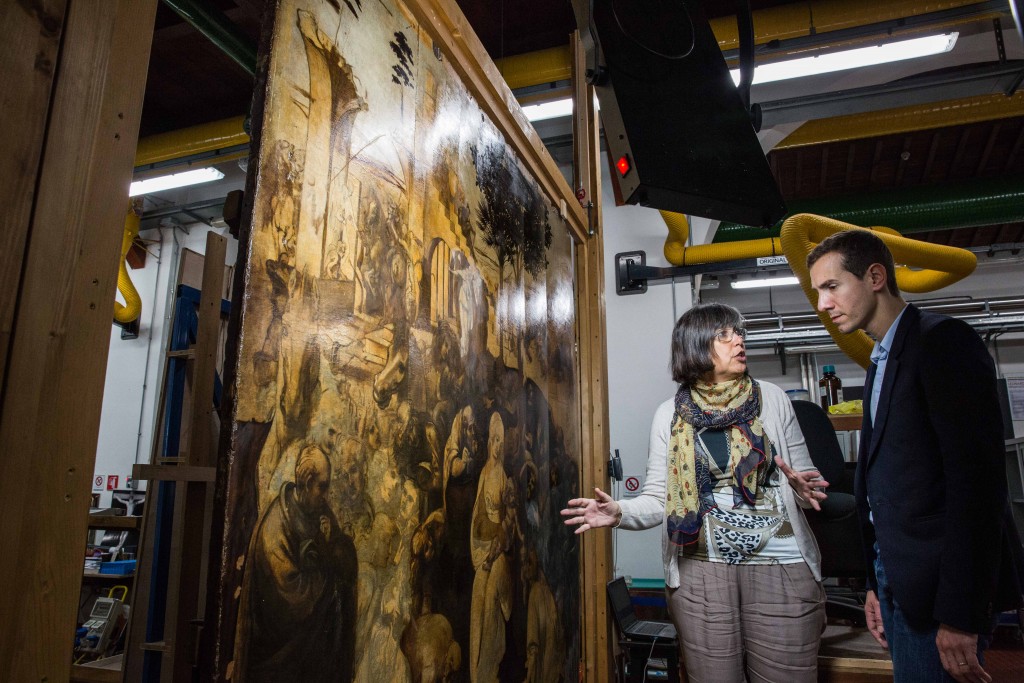 Cecilia Frosinini, deputy director of the OPD, explains the restoration work that’s been done on Leonardo da Vinci’s “Adoration of the Magi,” which arrived in Nov. 2011 from the Uffizi Gallery in Florence and is now being cleaned. Photo by Frank Carlson 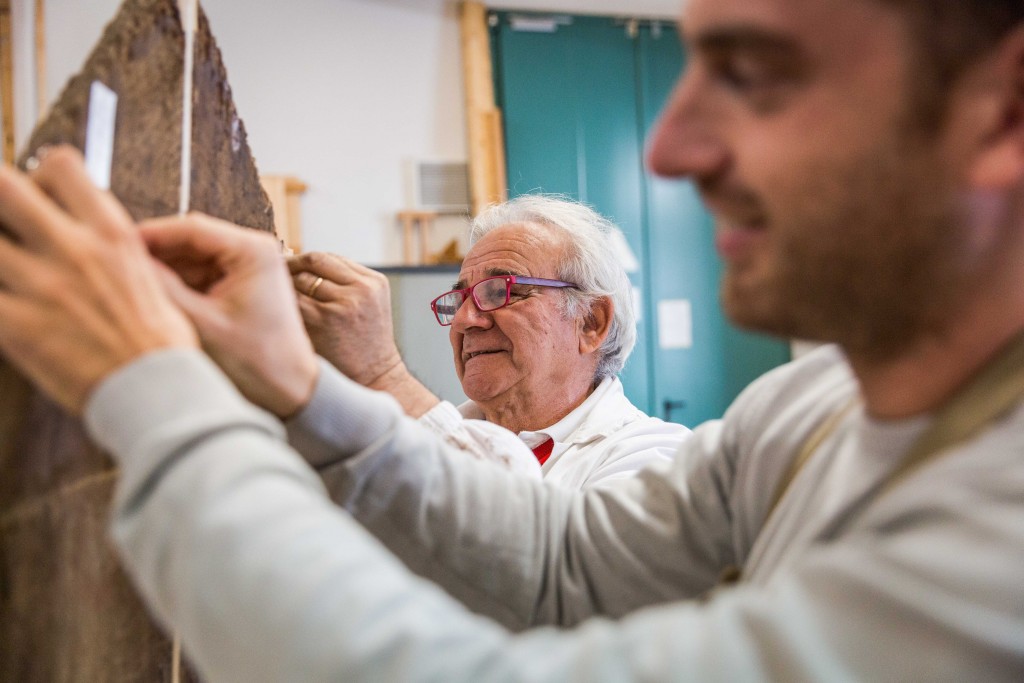 Ciro Castelli was a young carpenter when the 1966 flood hit, and through the emergency response he became involved in wood restoration. He’s now a master woodworker who came out of retirement to work on Vasari’s “Last Supper,” as well as to teach a new generation of wood restorers his techniques. Photo by Frank Carlson 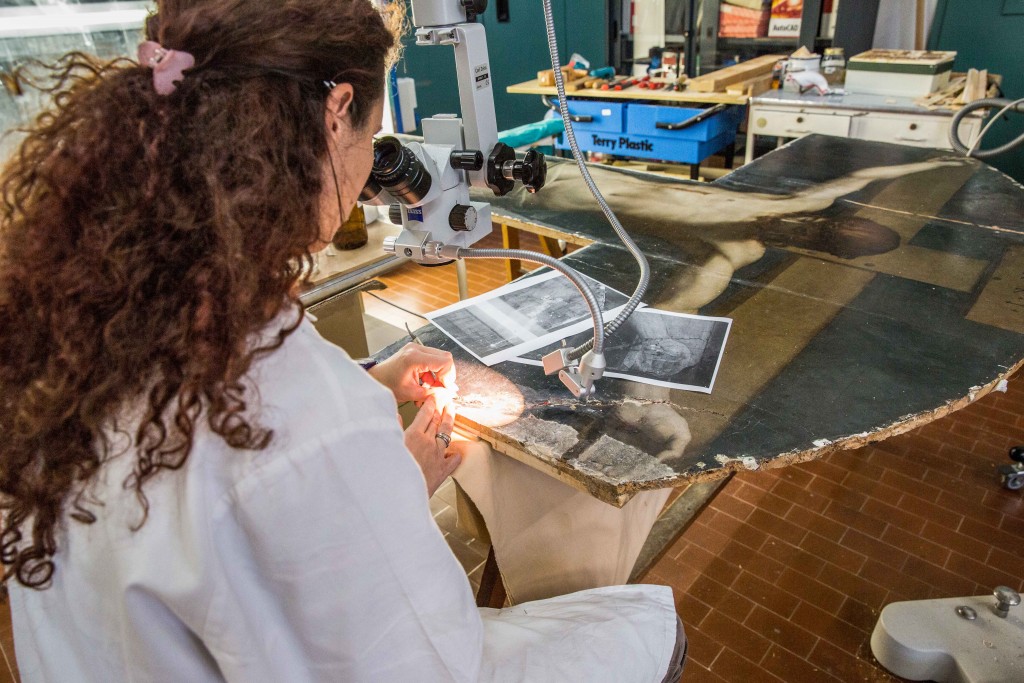 A restorer works on Alessandro Allori’s “Crucifixion,” painted in the 16th century. It arrived at the OPD in 2011, suffering from cracks in its wood supports. Photo by Frank Carlson 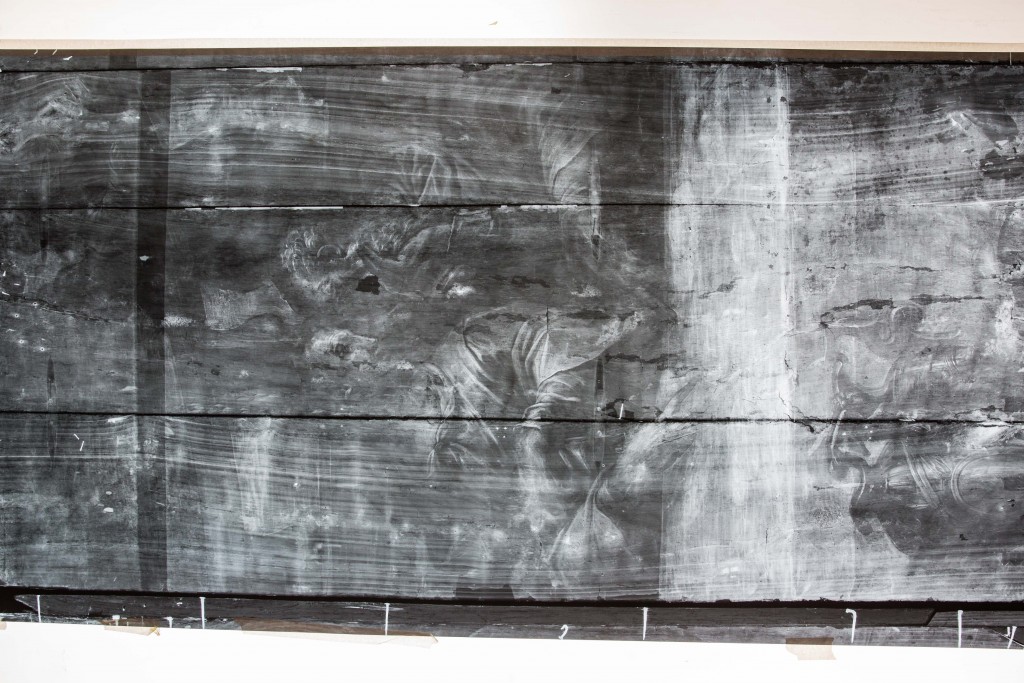 A large X-ray shows one panel of Vasari’s “Last Supper,” including places where its wood planks split and where paint was lost. Photo by Frank Carlson 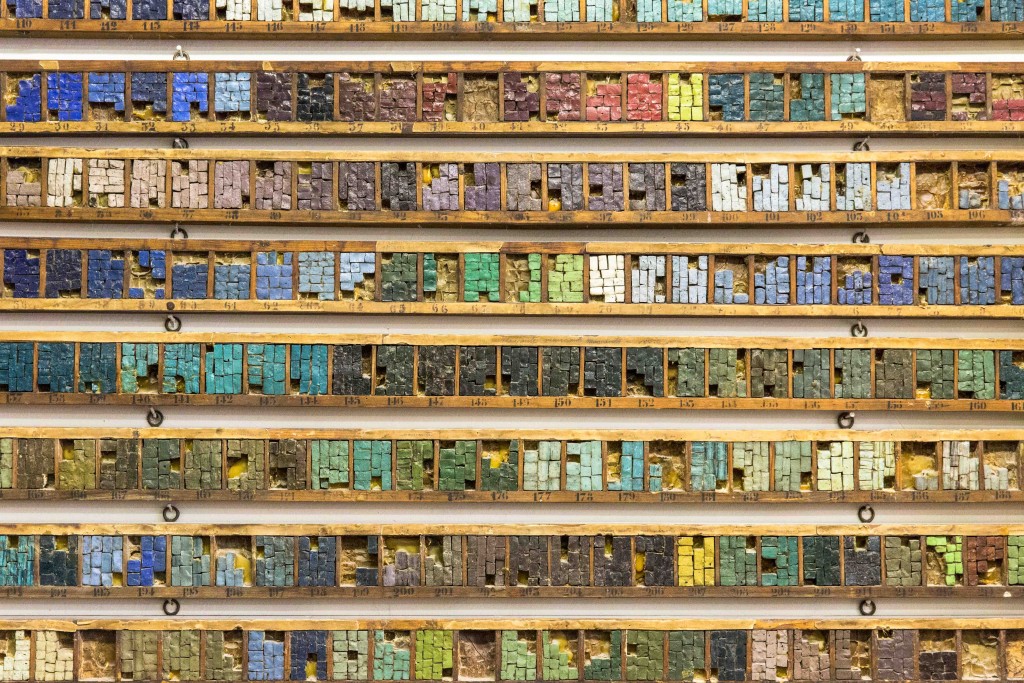 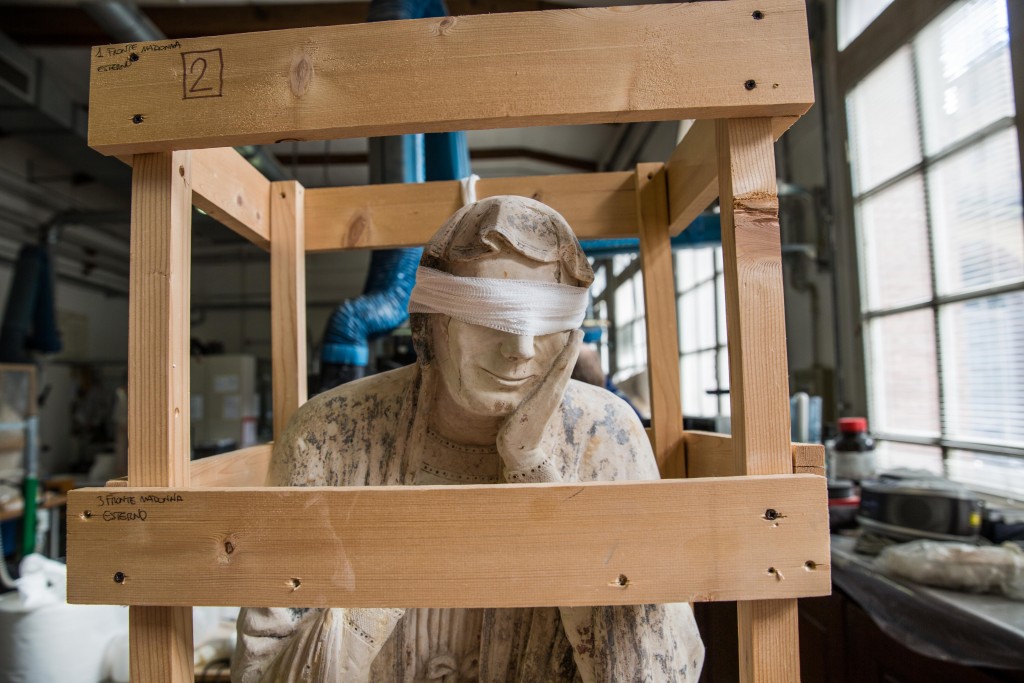 A sculpture awaits restoration in the OPD’s museum workshop. Photo by Frank Carlson

Left: This crucifix comes from the city of Modena and was smashed into 12 pieces during an earthquake in 2012 in the Emilia Romagna region of northern Italy. Restorers at the Opificio delle Pietre Dure have reconstructed it but decided to leave signs of the damage to help tell its history. Photo by Frank Carlson