Photos: What kids can learn from Ferguson’s murals of hope

When a jury in November announced its decision not to indict officer Darren Wilson in the death of Michael Brown, some protests gave way to vandalism, leaving local businesses’ windows shattered. Members of the St. Louis art community gathered at Café Natasha’s on S. Grand Blvd. late that night, eager to help however they could. And they began to paint.

They painted messages of hope and peace signs over the restaurant’s boarded-up windows, splashing bright colors across the dull planks. They continued painting for days, gathering other participants and talking as they painted — about their community and what they hoped for the days going forward. 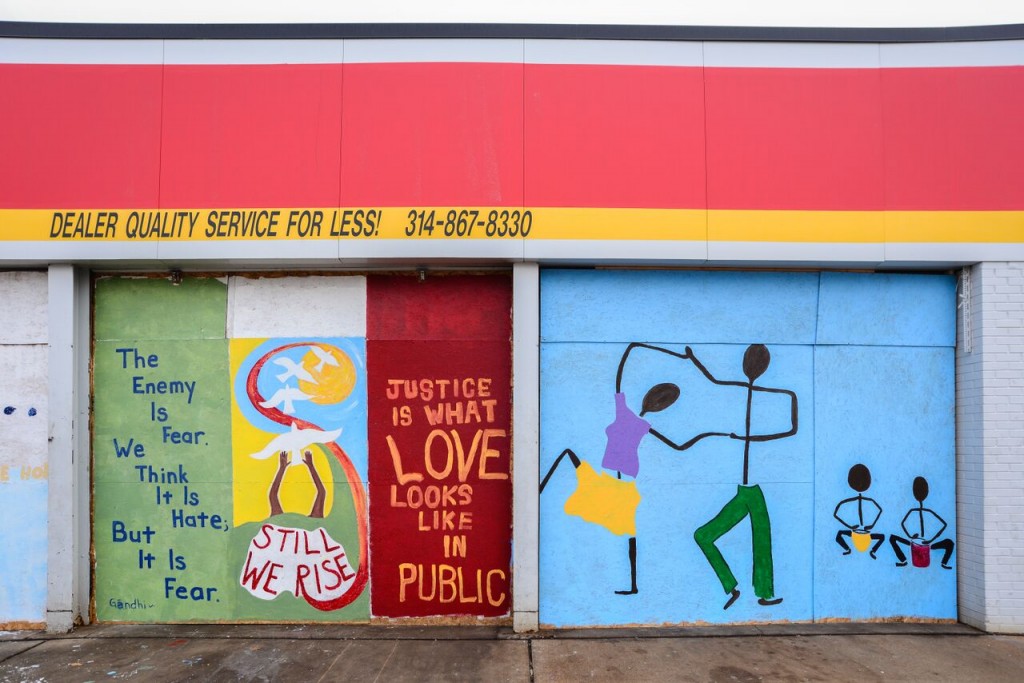 Ferguson businesses painted over by residents who participated in the Paint for Peace project in late November, 2014. Photo by Ryan Archer

The project, which became known as Paint for Peace, spread from St. Louis to Ferguson, where Carol Klein first encountered it. “People literally started having conversations, standing side by side, who were from the community but maybe didn’t know each other, and they were talking about the issues,” Klein, who grew up in Ferguson and now lives a few miles away, said. “It had a change in the people that did the painting.”

“You could feel things starting to get a little bit better,” Reggie Thomas, a security guard who lives in Ferguson and participated in painting, said.

Klein, who had never published a children’s book before, said she wanted to tell the project’s story to kids who may have had trouble processing the events surrounding Michael Brown’s death.

“There was just so much pain in the community,” she said. “If adults are having trouble processing this, how are kids managing?”

Her children’s book “Painting for Peace in Ferguson” tells the story of how the project began.

An excerpt from “Painting for Peace in Ferguson” by Carol Klein.

Its first edition of 2,000 copies, mostly distributed in the Ferguson and St. Louis areas, sold out quickly. Klein visited six schools in the area over the winter and spring, reading the book to kids and leading discussions on community art.

For Cristina Stoverink’s first-grade class at Central Elementary School in the Ferguson-Florissant School District, the book provided a way to work through a difficult year. Klein visited the class to read the book in February.

“They made a connection right away with just the title,” Stoverink said. “They could remember and associate things from the story with where they lived.”

Klein said she wanted to publish “Painting for Peace in Ferguson” as a positive example of activism through art. Above, a page excerpt from the book.

The book features photos of actual participants in the project, which could help it resonate with students, according to Natasha Bahrami, co-owner of Café Natasha’s, where the Paint for Peace project began.

“I think it makes it real, instead of something in a fairy tale,” Bahrami said. “I think it’s important to talk to children like they’re real people in the real world.”

Klein said she hopes that the photos of other kids in the book will help it resonate with students. “When kids read the book, I think it’s really gratifying and empowering to them to say, ‘Even kids my age can make a difference in the community,'” she said. 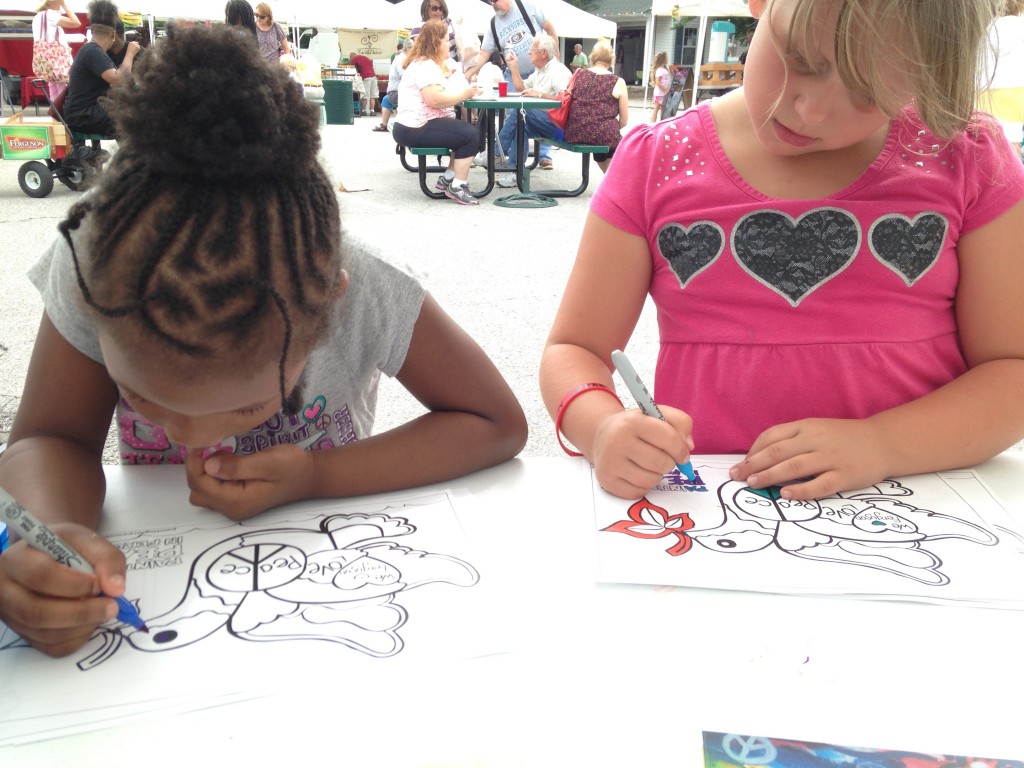 Two children color at the Ferguson Farmers Market during a book signing for “Painting in Peace in Ferguson” July 25, 2015. Photo by Carol Klein

For older students, Klein said she hopes the book can spark conversations about the role of art in social change with questions like “How does art move society? How does it make people think?” 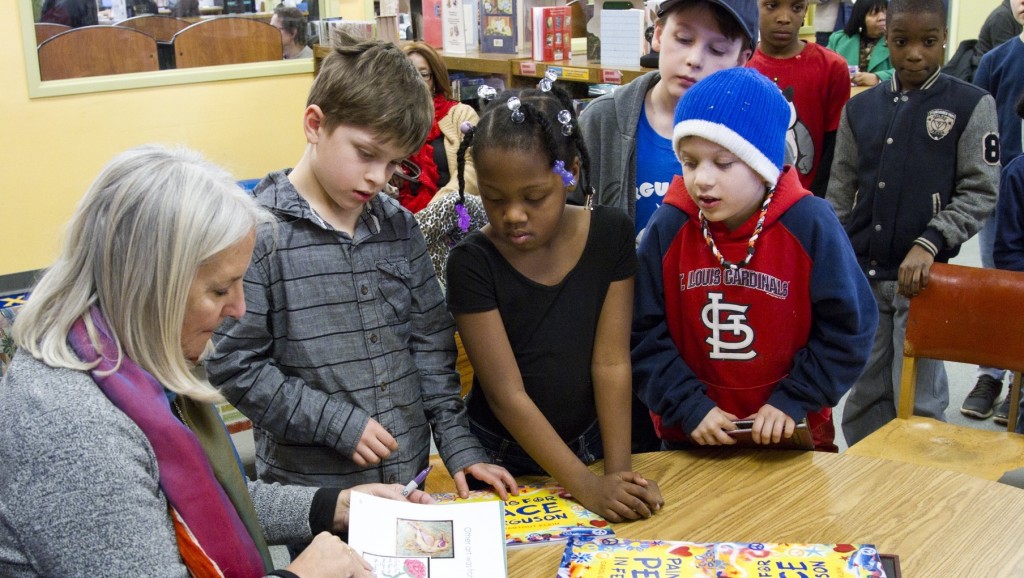 Children talk to “Painting for Peace in Ferguson” author Carol Klein at the Ferguson library. Photo by Carrie Zukoski

The book, whose proceeds will be donated to local youth and art programs in Ferguson, also helps cast new light on a difficult period of Ferguson’s history for kids, Bahrami said.

“Younger generations may not understand why anything like that would happen, or how we come together to overcome it. I think a children’s book may help children who don’t really have a grasp on it or understand the parameters of the whole situation,” Bahrami said.

Stoverink said her classroom has a designated bookshelf where the books change every season. The one that stays is “Painting for Peace in Ferguson.”

Stoverink said she plans to read the book with her new class this fall. “The book is a tool that can be used over and over again with a different group of kids,” she said.

Left: A photo of Ferguson businesses boarded up and painted over by residents who participated in a community art project in late November, 2014. Photo by Ryan Archer