PHOTOS: Inside the devastation of the Great Lakes — and the cautious recovery underway

Our April pick for the PBS NewsHour-New York Times book club “Now Read This” is Dan Egan’s “The Death and Life of the Great Lakes.” Become a member of the book club by joining our Facebook group, or by signing up to our newsletter. Learn more about the book club here.

In “The Death and Life of the Great Lakes,” journalist Dan Egan crafts a cautious yet hopeful narrative using history, reporting, and his own experiences to highlight the threats posed to the world’s largest freshwater system.

Among the first and greatest threats the system has faced: invasive species. But climate change and human industry have also played a role.

Below, Egan takes us behind the scenes with maps and photos to explain just how the Great Lakes were damaged — and the uncertain but possible recovery underway. In his words: 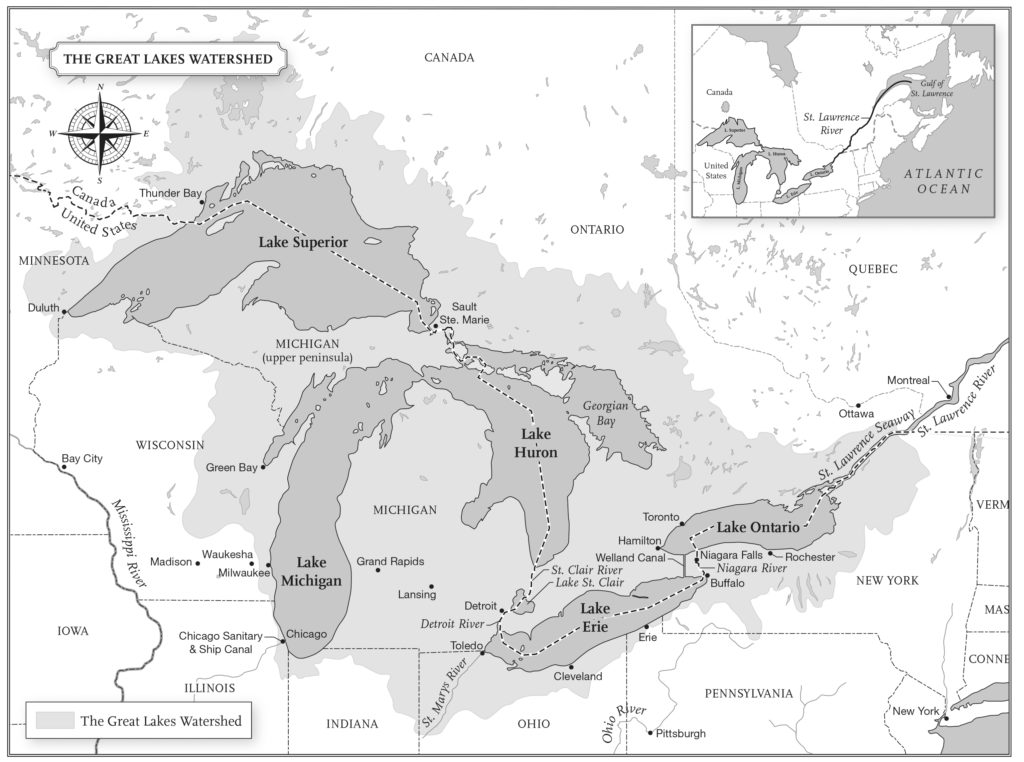 The quick unraveling of the Great Lakes

The most important thing to understand about the Great Lakes is how ecologically unique they were, and how quickly their native ecosystem unraveled following white settlement. The combined surface of the area of the lakes is hard to grasp – 94,000 square miles, which is roughly the size of the United Kingdom. But despite this expanse, the five lakes were in many ways as isolated from the rest of the aquatic world as a spring-fed pond in the middle of the woods.

The lakes were so young and unexposed to outside perturbations that they were, essentially, ecological babies. And just as vulnerable.

Humans destroyed this isolation starting with the opening of the Erie Canal in the 1820s that skirted Niagara Falls and allowed barges to sail smoothly from New York harbor all the way to Lake Erie. The canal digging to open the lakes to ever-bigger ships didn’t stop there. It culminated with the 1959 opening of the St. Lawrence Seaway that tamed the St. Lawrence River with locks, dams, channels and canals. It also provided ships more than 700-feet-long a lift around Niagara Falls. This made for smooth sailing all the way to Duluth, Minnesota, on the western shore of Lake Superior, some 2,300 miles inland from the Atlantic.

On the western side of the Great Lakes basin, canal diggers punched a hole in the divide separating the lakes from the Mississippi basin at Chicago. They did so to pull the filthy Chicago River backwards, so it flowed out of Lake Michigan (the city’s drinking water source) and into a Gulf-bound river in the Mississippi basin. This saved the city’s drinking water supply and, conveniently, opened up a barge corridor from Chicago all the way to New Orleans.

Unfortunately, it wasn’t just boats that took advantage of the opening of these two doors. Dozens of non-native species used the manmade waterways to invade the Great Lakes, where they found waters teeming with relatively few species of fish. The lakes were so young and unexposed to outside perturbations that they were, essentially, ecological babies. And just as vulnerable.

Picture of map on page 13. The surface elevation (in relation to sea level) of the Great Lakes, and the natural barrier at Niagara Falls.

Not a static system

Another important feature to understand about the Great Lakes is that they are not a static system. They are, in a sense, a giant slow motion river flowing east from Lake Superior down the St. Marys River and into Lakes Michigan and Huron (which are actually two lobes of one giant lake) and then from there down another river system and into Lake Erie. The lakes’ waters then tumble over Niagara Falls, drift across Lake Ontario, roll down the (now-tamed) St. Lawrence River and whoosh out to the Atlantic Ocean. This means that the lakes are constantly draining, and constantly being replenished by precipitation in a system so exquisitely balanced that for hundreds of years it kept the lakes always within several feet of their long-term average. That balance is now jeopardized, primarily due to climate change. It’s also been altered by the channel digging and dam building that not only made way for bigger ships but also altered the lakes’ natural flow out to the ocean. 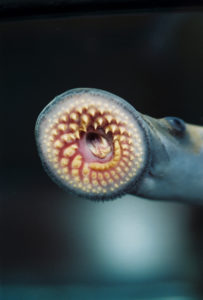 This is the first invader that really showed the people of the Great Lakes the damage invasive species can do. A native to the Atlantic coast, the sea lamprey is a devastating parasite that makes its living sucking the blood and other juices out of its victims. Fossils of the eel-like fish have been found that reveal it has been swimming the world’s oceans for more than 350 million years.

A new wave of invaders isn’t attacking the top of the food chain but instead is taking out the bottom.

The first lamprey was found in Lake Erie in the 1920s and by the early 1950s lake trout most everywhere but in Lake Superior had been wiped out. This wasn’t bad just for lake trout, the aquatic wolf of the Great Lakes. With this apex predator knocked out, populations of little fish literally exploded. Unfortunately for the Great Lakes, right behind the lampreys came alewives, an East Coast herring that swam their way up the shipping canals and spread across the Great Lakes. By the 1960s, biologists estimated alewives made up 90 percent of Lake Michigan’s fish biomass – nine out of every 10 pounds of fish in the lake was alewife, a species prone to massive die-offs and washing ashore by the billions. The problem was solved with a combination of chemicals to kill the lampreys and the introduction of Pacific salmon to eat the Atlantic alewives.

The system worked well for decades but now is in danger of collapsing because a new wave of invaders isn’t attacking the top of the food chain but instead is taking out the bottom. And everything above it is suffering, all the way up to the salmon that today sustain the Great Lakes multi-billion dollar recreational fishery. 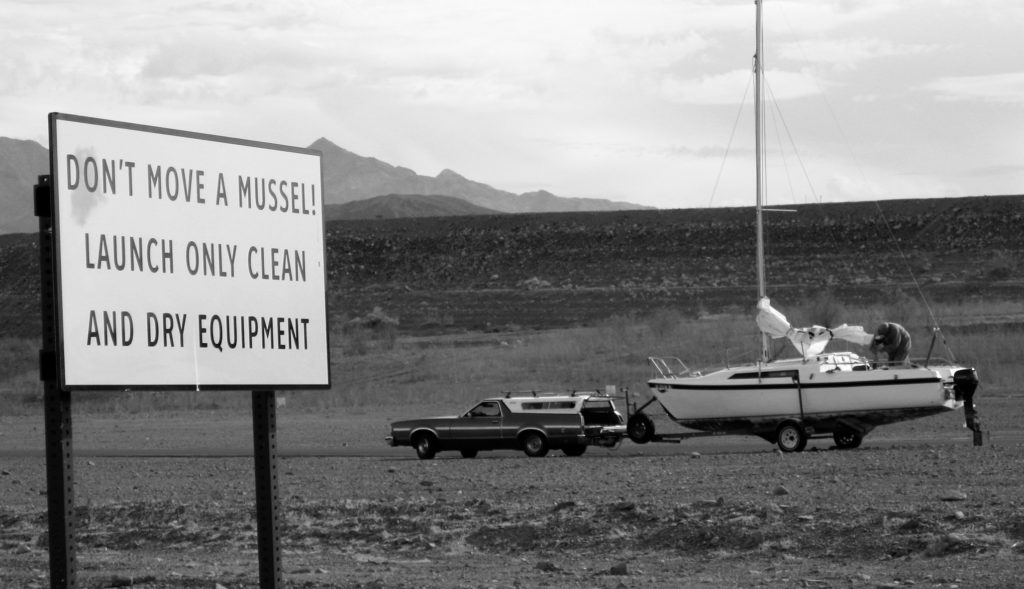 How mussels hitched a ride

That collapse has been caused by the arrival of zebra and quagga mussels, which hitchhiked their way into the Great Lakes in the ship-steadying ballast tanks of overseas freighters sailing up the St. Lawrence Seaway. The mussels now blanket the lake bottoms by the trillions, if not quadrillions. Each fingernail-sized adult can filter – strip the plankton from – a liter of water per day. The result is the lakes literally have the life sucked out of them, and all that energy is tied up in the mussel shells.

Now those mussels are on the move. They’ve hitched rides on the hulls and in the bilge water of recreational boats towed from the Great Lakes and have colonized waters as far west as California. A ferocious fight is under way to keep the mussels contained to the Colorado River system, but if they make their way into the Columbia River basin, the pipe-cloggers could do colossal economic and ecological damage to the hydroelectric dam system and the Northwest’s dwindling salmon populations. It’s now apparent that Great Lakes invasions don’t stay confined to the lakes, and are indeed a continental problem.

Remarkably, all this biological trouble has to come through a single door – the 80-foot-wide St. Lambert lock at Montreal, the first lock on the Seaway system. Stop a contaminated vessel here, and you can stop the rest of the continent from the next invasion. 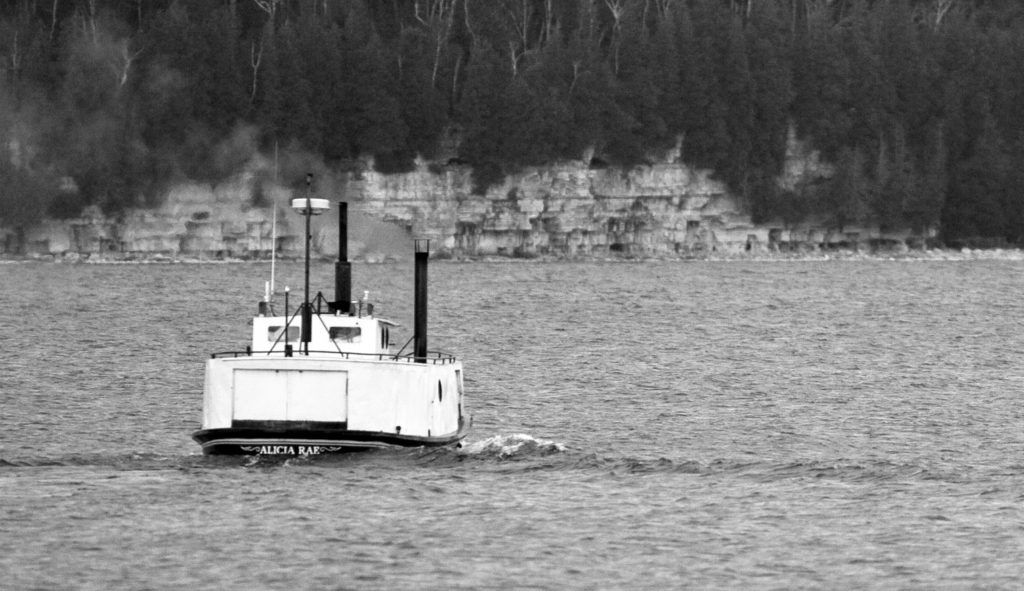 The last fishing boat in Milwaukee

This was the last fishing boat in Milwaukee. It was operated by a fourth-generation fisherman who hung on as long as he could, but finally pulled out in 2011 when he could no longer catch enough fish to pay for the fuel to get out on Lake Michigan. He left for Alaska, where he now catches more pounds of fish in one day than he could catch all year in the Great Lakes. I was with him the day he talked to his parents about moving his wife and three kids to Alaska. They were staying in a cabin on the family homestead in northern Wisconsin that had been converted by an Illinois couple into a bed and breakfast. His mom was crying over the prospect of losing her grandkids to Alaska, and losing her family’s long connection to the Great Lakes. “I’m not leaving this lake,” the fisherman told his mom. “The lake left me. It’s gone.”

“I’m not leaving this lake. The lake left me.”

That was seven years ago, and a somewhat remarkable recovery has occurred since, starting on Lake Huron but spreading to the other lakes as well. The reason: another Seaway invader. It turns out the thumb-sized round goby, an invasive fish that came from the same place as the mussels, the Caspian and Black Sea basins. These little fish are evolutionarily built to feast on mussels, and while their population will never grow big enough to significantly dent the mussel population, they are turning out to be ecologically important because they are able to unlock the protein tied up in the mussel shells and send it up the food chain. 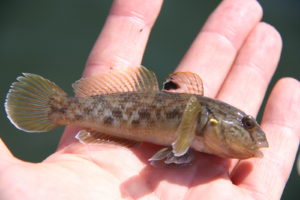 Any fish that can figure out how to eat a goby is doing well, and this includes native lake trout, whitefish and walleye, as well as some non-native species like brown trout. Unfortunately for the sport fishing community, this does not include the Pacific salmon, which are still stocked in the lakes annually by the millions. The salmon have been starved out on Lake Huron and it appears the fish in Lake Michigan are headed in a similar direction.

The good news is that the lakes seem to be achieving a new balance, one in which the top of the foodchain looks more like its “natural” self than it has in decades. Other goby-eating non-native species, including brown trout, are also thriving. The result, biologists hope, will be a Great Lakes ecosystem that will find its own balance and not require so much annual stocking to maintain a human-engineered balance.

But the problem is that the doors we opened with the construction of the St. Lawrence Seaway and the Chicago canal system remain open to new invasions. And all it takes is one new invader to unravel the natural recovery under way. 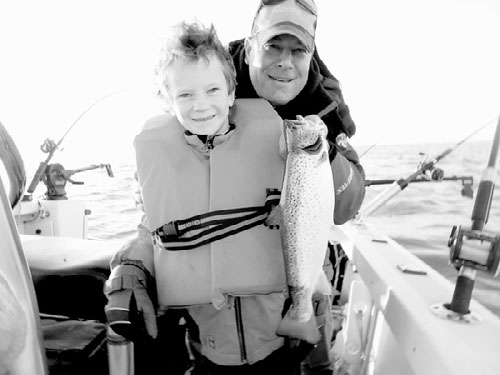 READ MORE: Dan Egan annotates a page of ‘The Death and Life of the Great Lakes’

READ MORE: How journalist Dan Egan wrote the life (and death) story of the Great Lakes

READ MORE: Discussion questions for ‘The Death and Life of the Great Lakes’

Left: Kayakers float down the Buffalo River near Lake Erie, one of 3,400 projects funded by the Great Lakes Restoration Initiative since 2010. Photo courtesy of Buffalo Niagara Riverkeeper.