Photos: Lynsey Addario’s life as a witness to war

Photojournalist Lynsey Addario didn’t receive formal training. She learned on the job as she traveled from Cuba to India and then into Afghanistan and beyond, making her a witness to and storyteller of many conflicts.

“To me, it’s so much about doing your homework,” said Addario, “going into a situation, getting to know the subject, making them feel comfortable, getting intimate access, getting access to all different aspects of people’s lives so that I am essentially telling an entire story and not just a single image.” 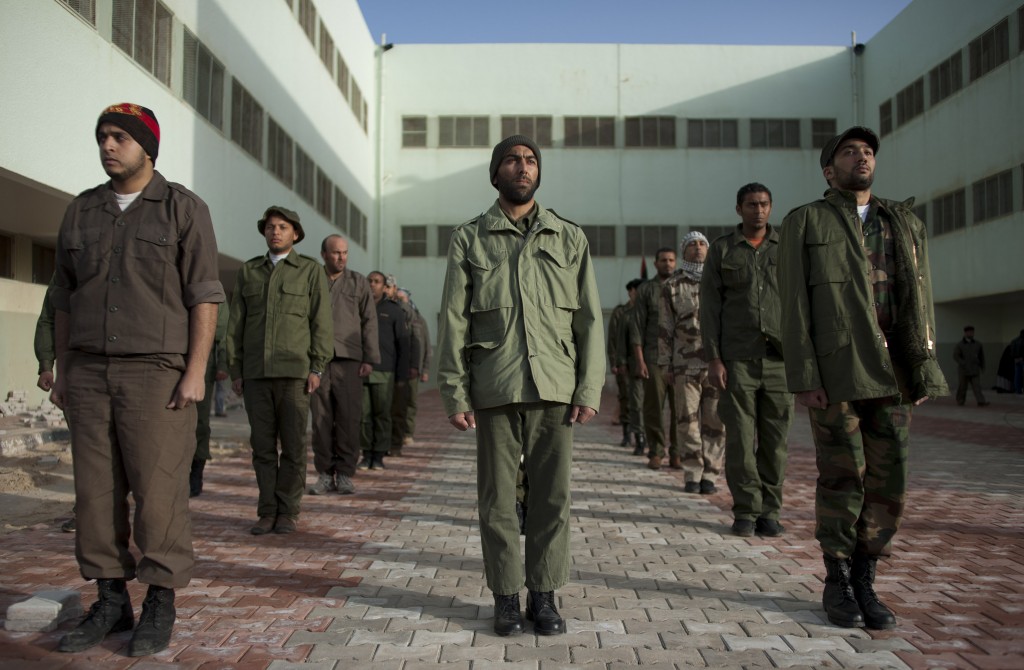 Volunteer fighters loyal to the opposition movement attend their first day of training at a base in Benghazi, in Eastern Libya, March 1, 2011. Photo by Lynsey Addario for The New York Times

Addario has photographed the war in Afghanistan — before and after the Taliban regime and the U.S. intervention — as well as the Iraq war. Her images helped expose the atrocities in Darfur and violence against women in the Congo. And her breathtaking work has not come without significant personal risk. In 2011, she was held captive for three days in Libya by soldiers of Moammar Gadhafi.

Addario tells her story in her new memoir, “It’s What I Do: A Photographer’s Life of Love and War.” The book spans from her first photographic experience through her time in conflict zones, her kidnapping and why she continues to go back to war-torn countries. 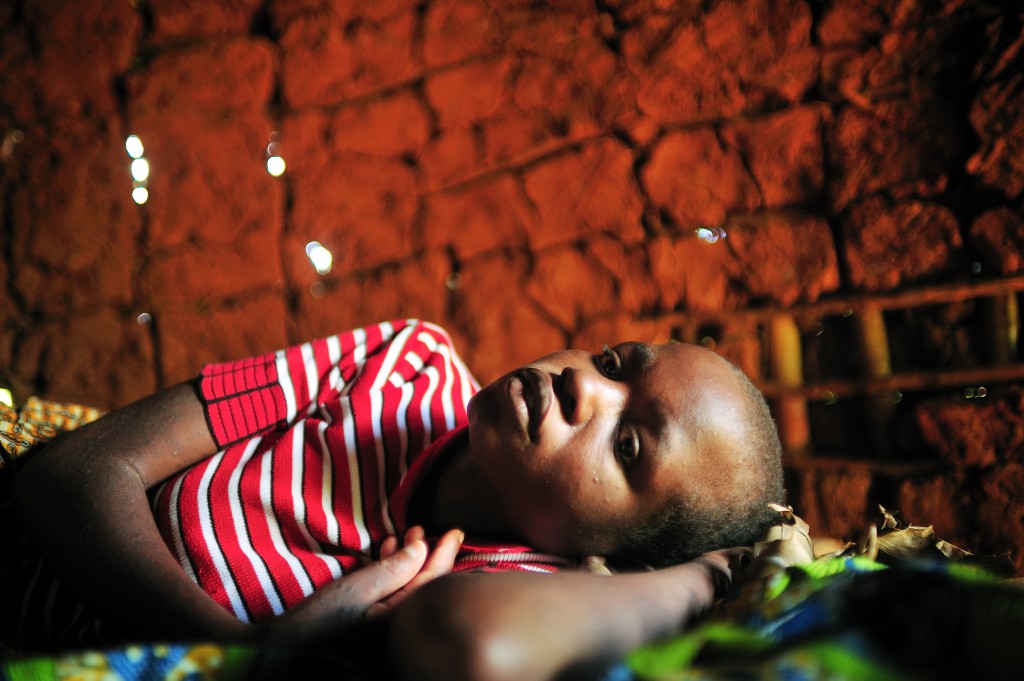 Mapendo, 22, lies in her home in Burhale, South Kivu, weak and covered in a skin rash less than a year after she was kidnapped and raped by five men who wore uniforms and carried guns, in South Kivu, in Eastern Congo, April 14, 2008. Mapendo never had the chance to go to the hospital after she was attacked for lack of funds and transportation, and was so weak she could barely sit up. “I have sores all over my body and I have been suffering from these sores for many months now. I had a husband and child before I was raped. My child died suddenly when it was 3 years old. My husband was buried in the mines….” Photo by Lynsey Addario

Addario was a 2009 MacArthur Fellow and a winner of the Pulitzer Prize in International Reporting and her images appear regularly in The New York Times, National Geographic and Time magazine. She recently joined chief arts correspondent Jeffrey Brown for a conversation about her new book and her career.

Tune in to tonight’s broadcast of the NewsHour to see Jeffrey Brown’s full conversation with Lynsey Addario. You can watch on our Ustream channel at 6 p.m. EST or on your local PBS station.

See a sample of her wide body of work, from Iraq and Afghanistan to the streets of New York, below.

Warning: some of these images depict the graphic nature of war.

Part of a series on Afghanistan under Taliban rule, May and July 2000. Photo by Lynsey Addario 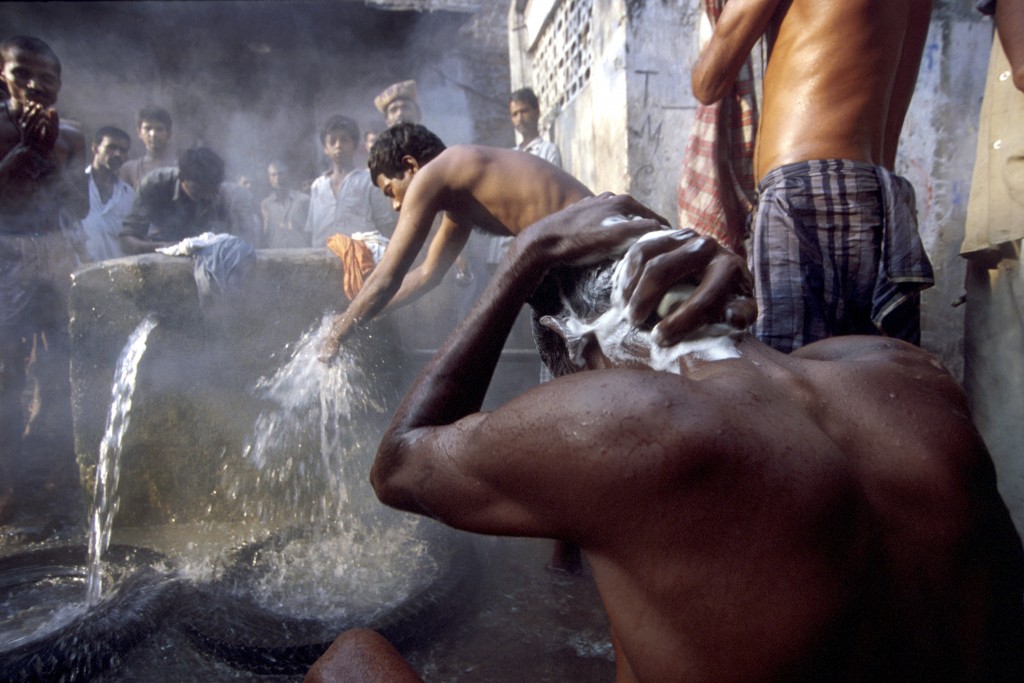 Indian men bathing on the streets of Calcutta at dawn, 2000. Photo by Lynsey Addario 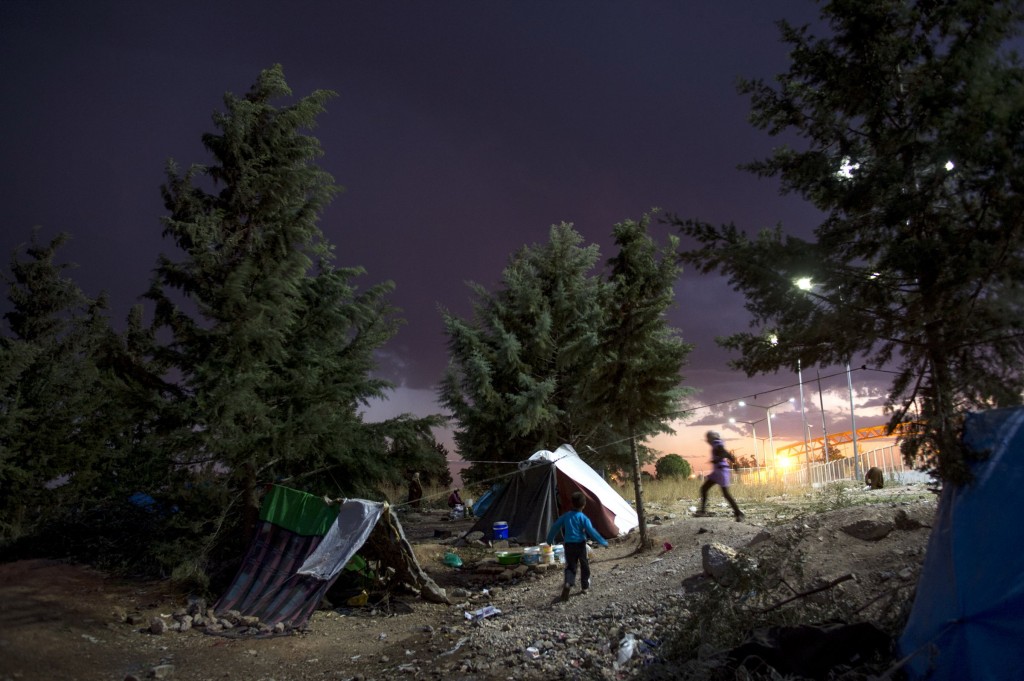 Syrian refugees live in squalid conditions with no aid in a squatters camp on the Turkish side of the Turkish-Syrian border, October 22, 2013. Many Syrian refugees cross back and forth from Syria into bordering countries to work as laborers and visit family. Photo by Lynsey Addario for The New York Times 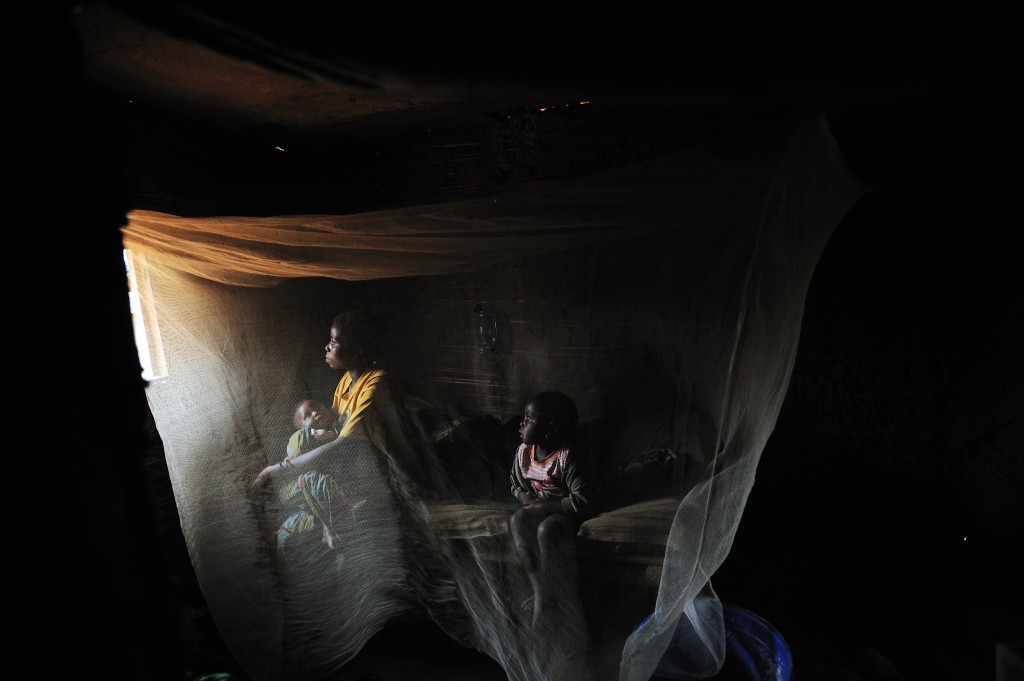 Kahindo, 20, sits in her home in the village of Kayna, North Kivu, in Eastern Congo, April 12, 2008, with her two children conceived out of rape. Kahindo was kidnapped and held for almost three years in the bush by six interhamwe, who she claims were Rwandan soldiers. They each raped her repeatedly, and she had one child in the forest, and was pregnant with the second by the time she escaped. Photo by Lynsey Addario 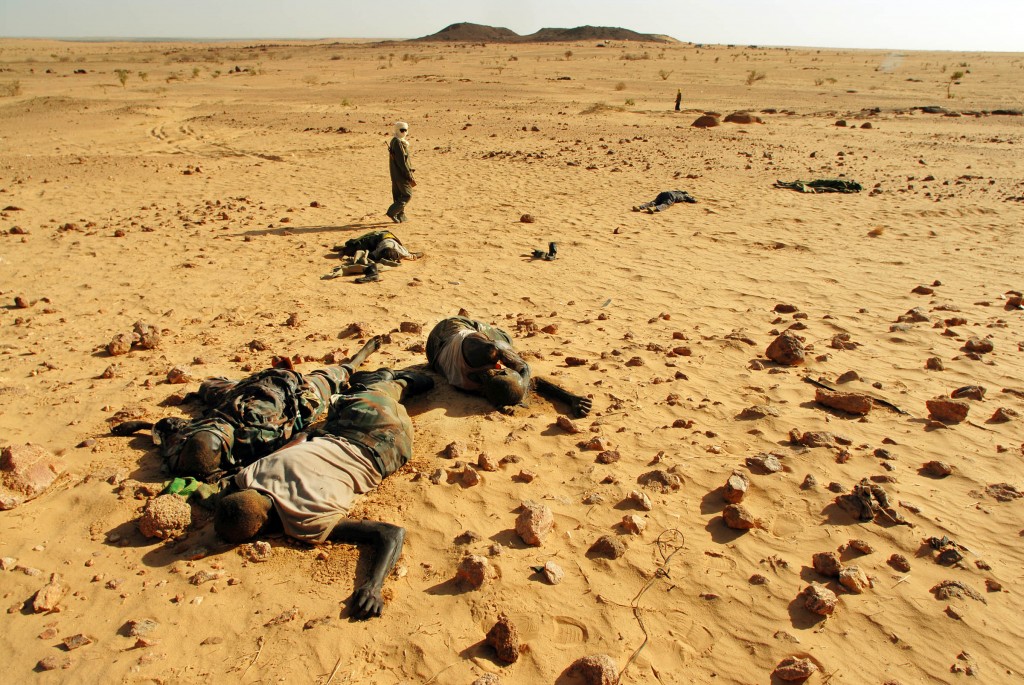 Sudanese rebels walk past dead Sudanese government soldiers in a temporary military camp near the Darfur-Chad border in Darfur, October 19, 2006. Photo by Lynsey Addario for The New York Times 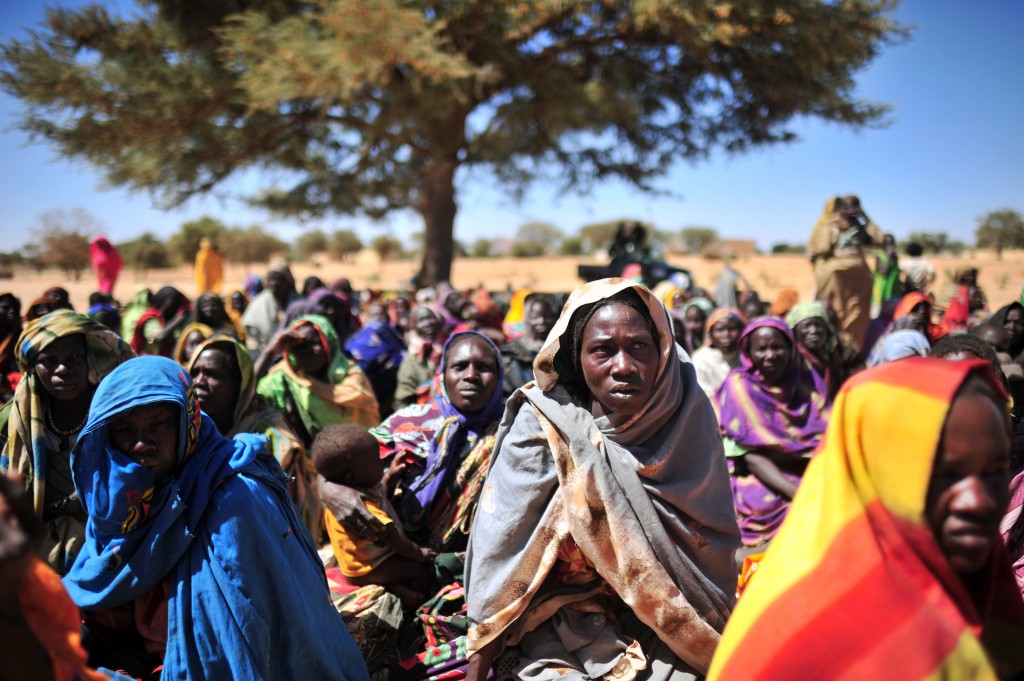 Sudanese women sit and await food and other items being distributed by international humanitarian organizations in the village of Selea, after being recently bombed by the Sudanese government and simultaneously attacked by armed men on camels, horseback and donkeys (otherwise known as Janjaweed) in West Darfur, Sudan, February 28, 2008. Photo by Lynsey Addario for The New York Times 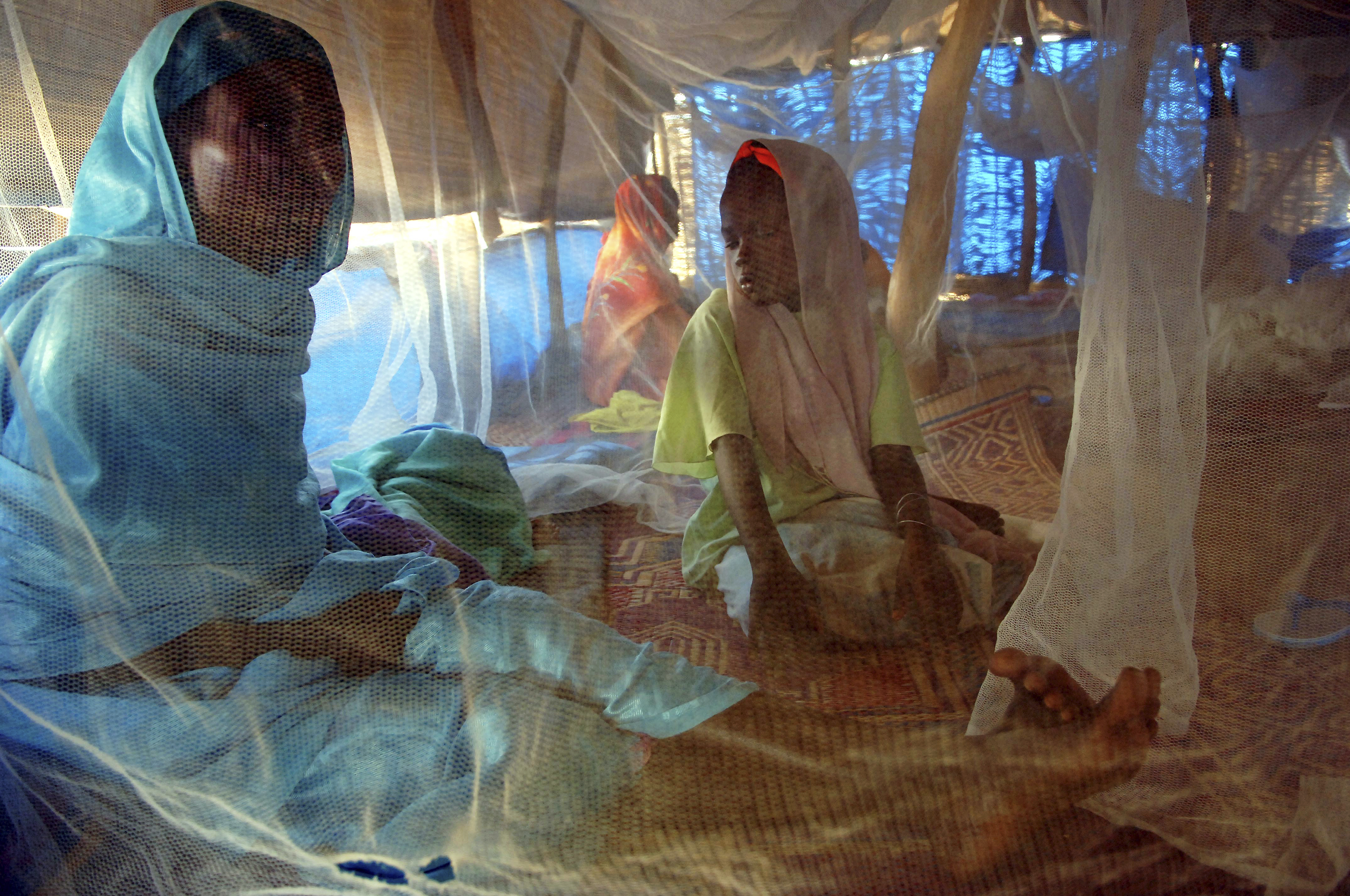 A mother and daughter sit beneath a mosquito net while being treated for malnutrition at the Kalma camp in Nyala, South Darfur, Sudan, November 2005. With fighting across Darfur between Arab nomads backed by government forces and ethnic Africans of the Fur and Zargawa tribes, hundreds of thousands of internally displaced civilians continued to flood the camps. Photo by Lynsey Addario 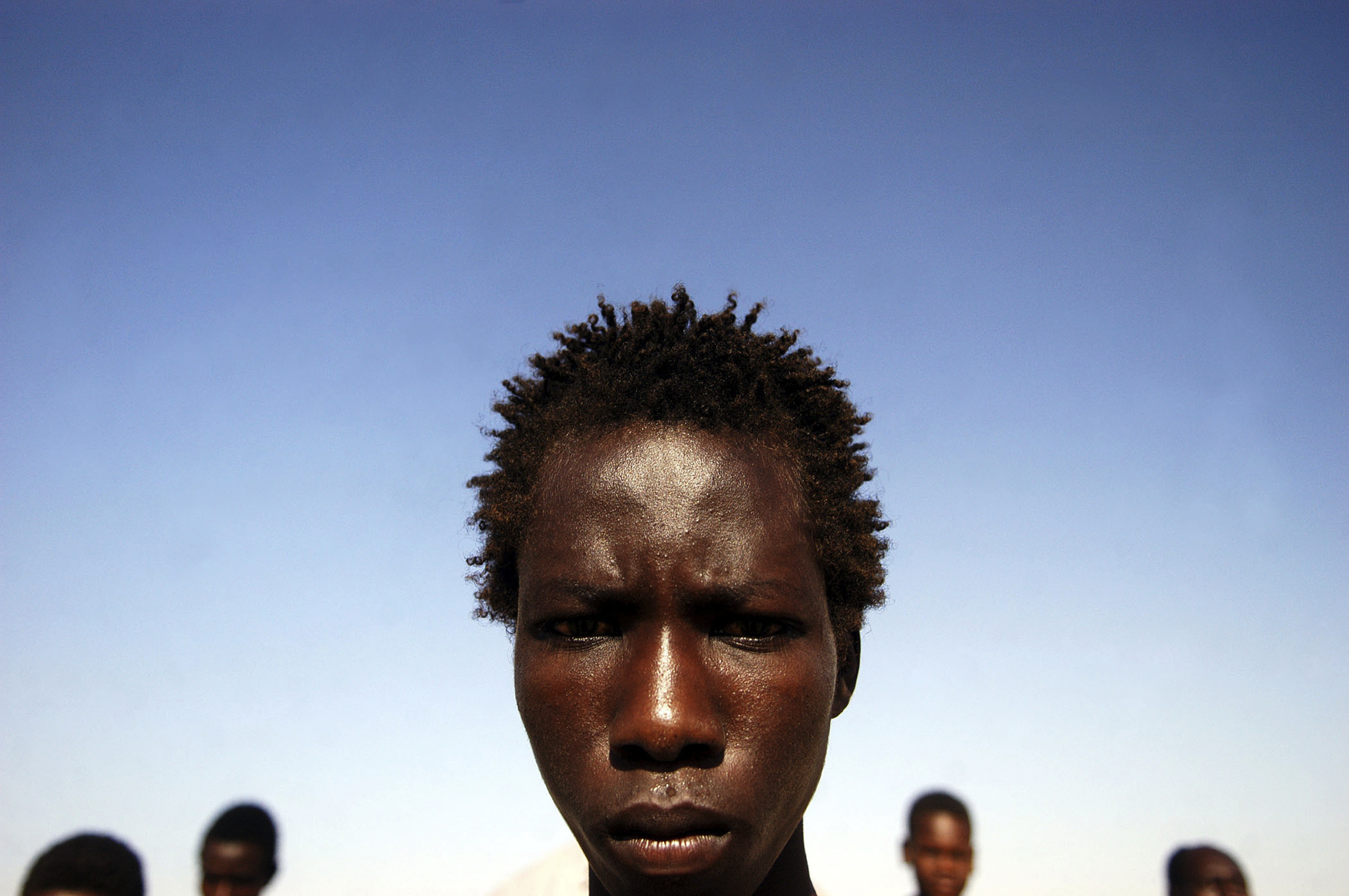 Abdul Hussein Majid Quing, 16, stands at attention while being trained along with other new recruits for the Sudanese Liberation Army in Bahai, Sudan, August 25, 2004. Photo by Lynsey Addario for The New York Times 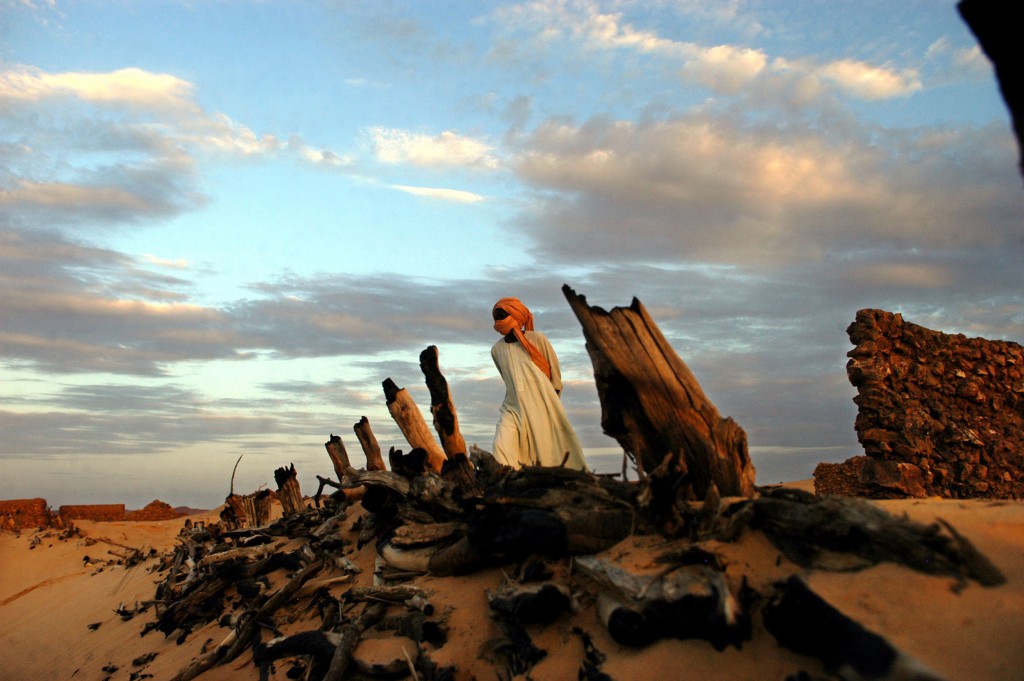 A Sudanese Liberation Army soldier walks through the remains of Hangala village on August 27, 2004, which was burned by Janjaweed several months earlier. Thousands of Darfourians fled their villages in search of shelter in the mountains or in neighboring Chad because of continuing attacks on civilians. Photo by Lynsey Addario 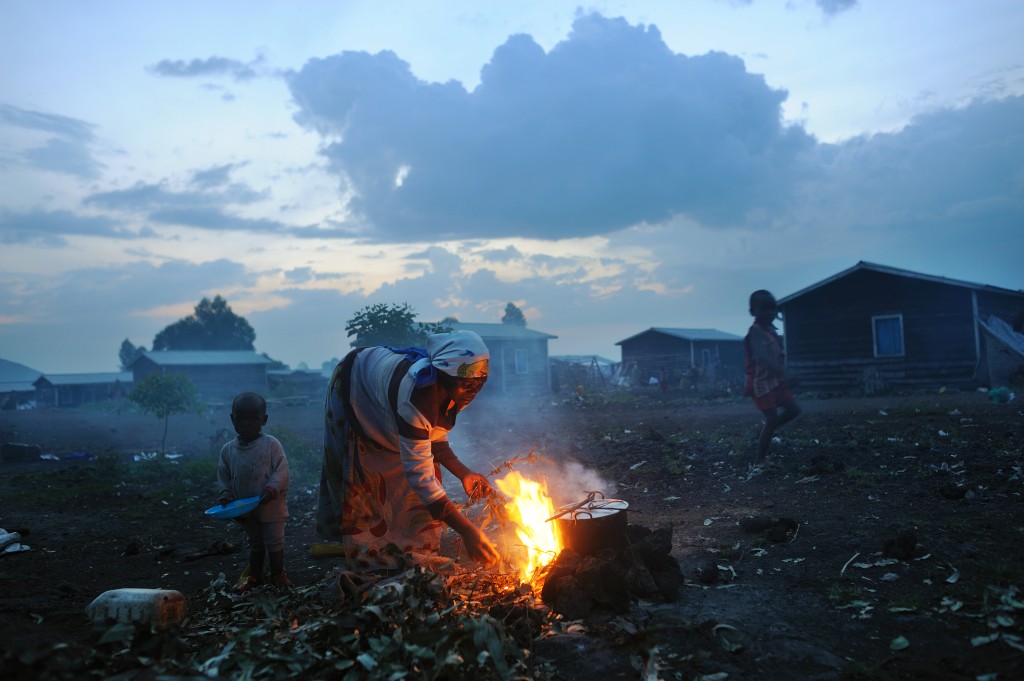 A Congolese woman displaced from recent fighting cooks in the evening at Kibati camp in Goma, in eastern Congo, November 26, 2008. Photo by Lynsey Addario 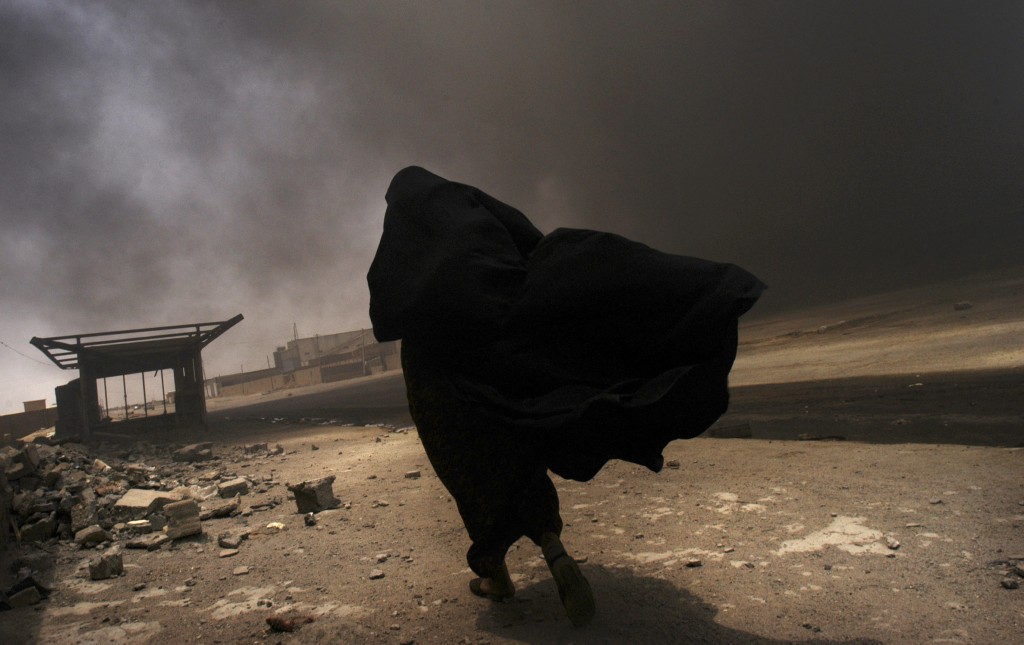 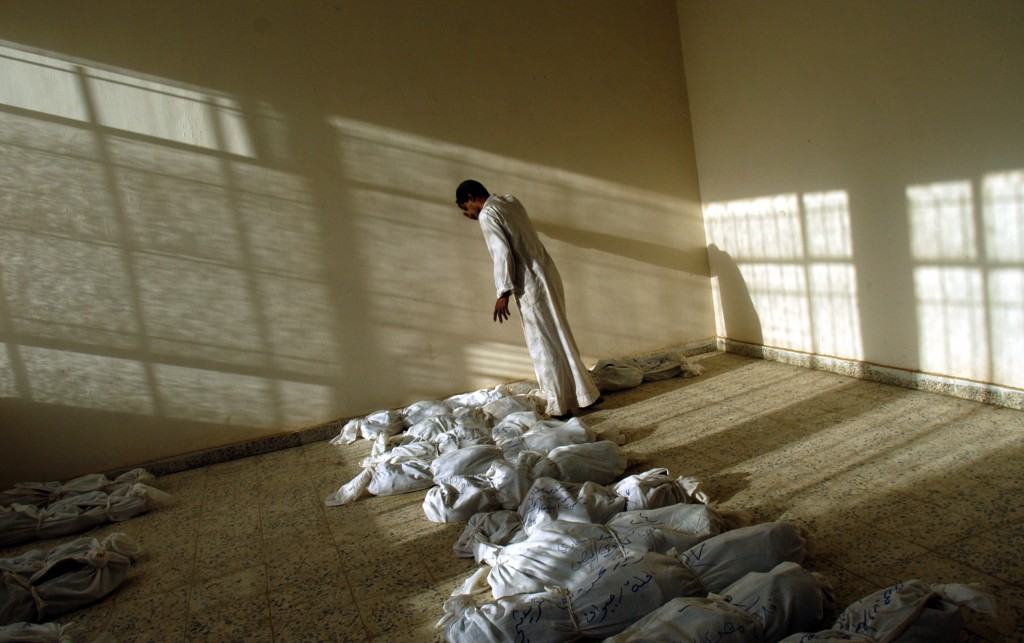 An Iraqi man leans against a wall as he walks along rows of remains of bodies discovered in a mass grave south of Baghdad, now laid out in a building in Iraq, May 29, 2003. After the fall of Saddam Hussain’s regime in Iraq, thousands of bodies were pulled from mass grave sites around the country, evidence of the brutal, bloody regime of the former dictator. Photo by Lynsey Addario 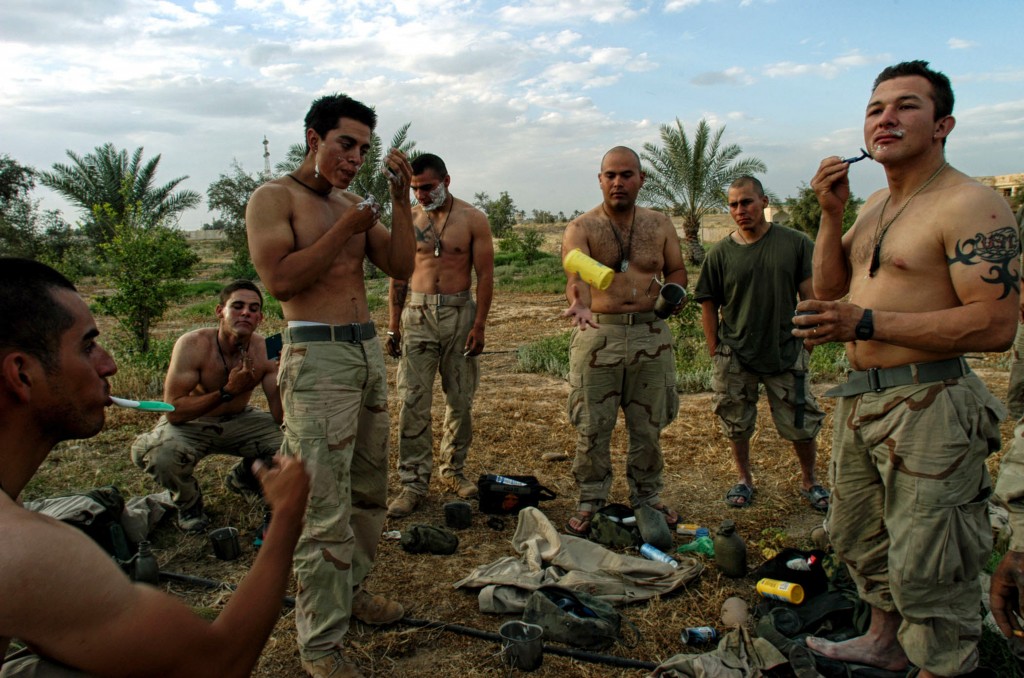 United States Marines take a break to shave in front of one of Saddam Hussein’s presidential palaces the day Tikrit fell from Republican Guard rule in Iraq, April 15, 2003. Photo by Lynsey Addario/ Corbis 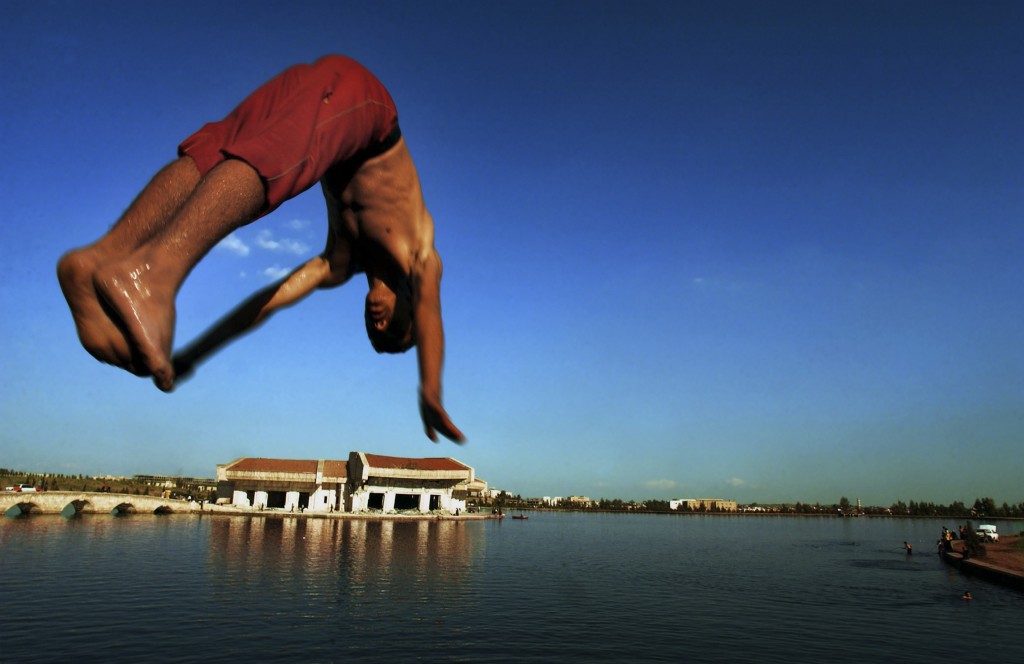 Children swim in former Iraqi leader Saddam Hussein’s pool at one of his palaces in Mosul. After the fall of Saddam Hussein’s regime, civilians got to enjoy the riches of the former leader. Photo by Lynsey Addario 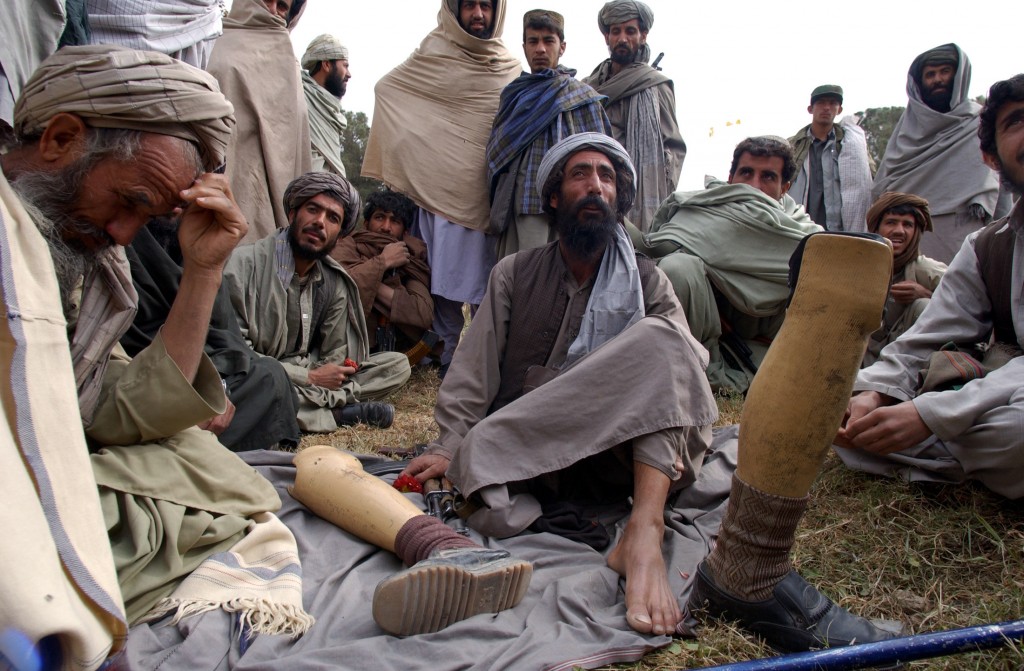 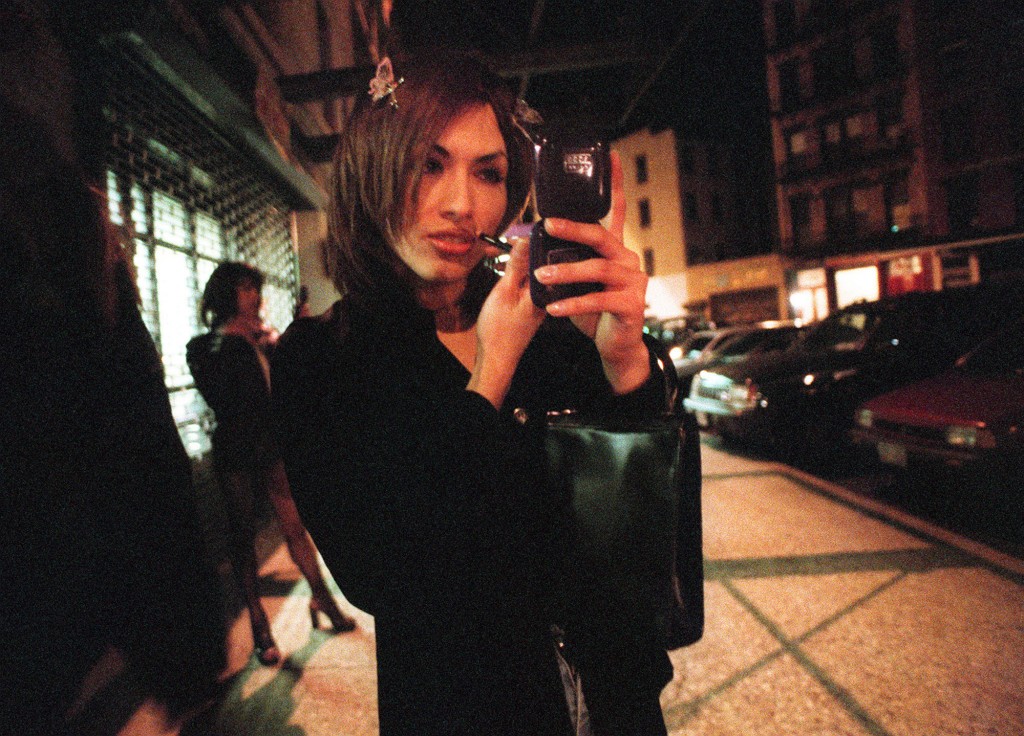 Christian Sosa reapplies her make-up on Little W 12th Street in New York Sunday morning, April 25, 1999, while other transgender prostitutes wait for clients in the background. Photo by Lynsey Addario 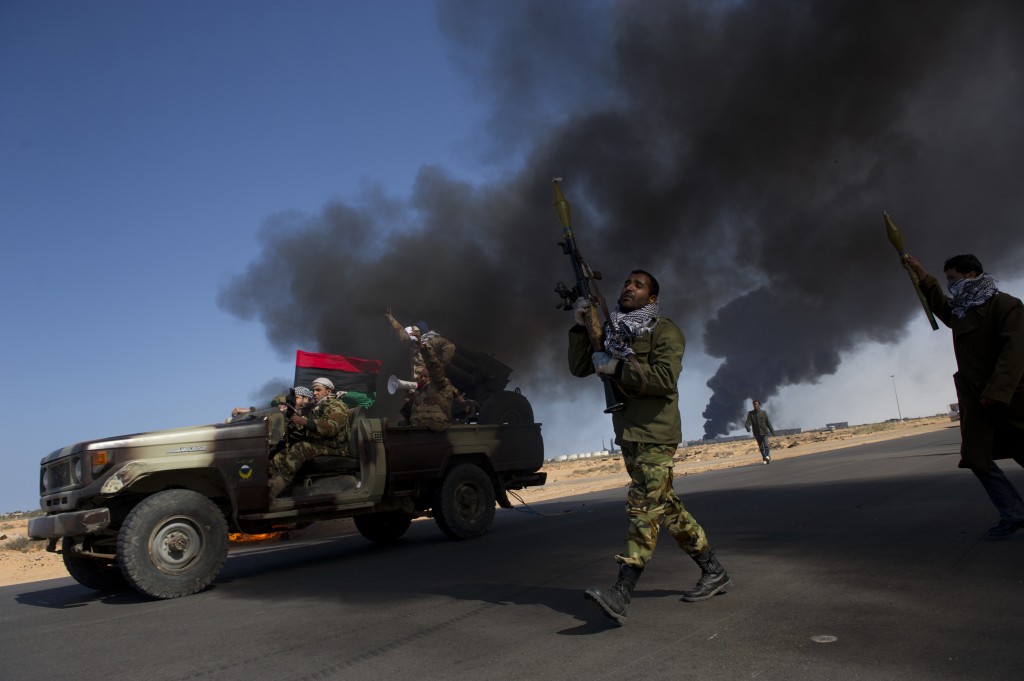 Opposition troops burn tires to use as cover during heavy fighting, shelling and airstrikes near the main checkpoint close to the refinery in Ras Lanuf, as rebel troops pull back in Eastern Libya, March 11, 2011. Photo by Lynsey Addario for The New York Times 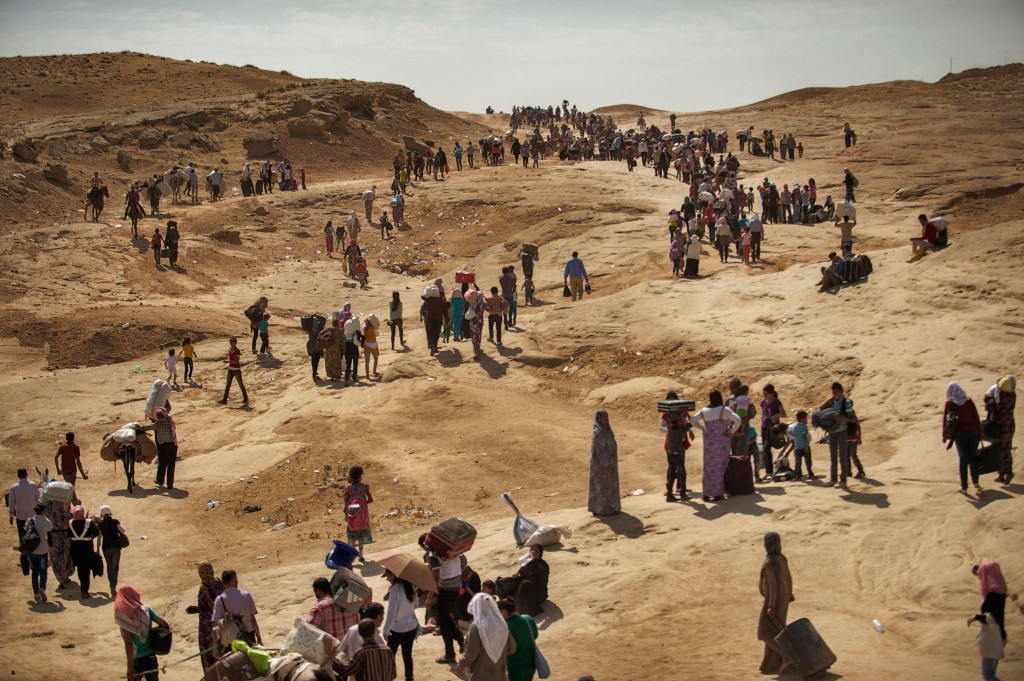 Thousands of Syrians cross from Syria into Northern Iraq near the Sahela border point in Dahuk, Northern Iraq, August 21, 2013. Photo by Lynsey Addario for The New York Times