I.M. Pei, the versatile, globe-trotting architect who revived the Louvre with a giant glass pyramid and captured the spirit of rebellion at the multi-shaped Rock and Roll Hall of Fame, has died at age 102.

Pei’s works ranged from the trapezoidal addition to the National Gallery of Art in Washington, D.C., to the chiseled towers of the National Center of Atmospheric Research that blend in with the reddish mountains in Boulder, Colorado. 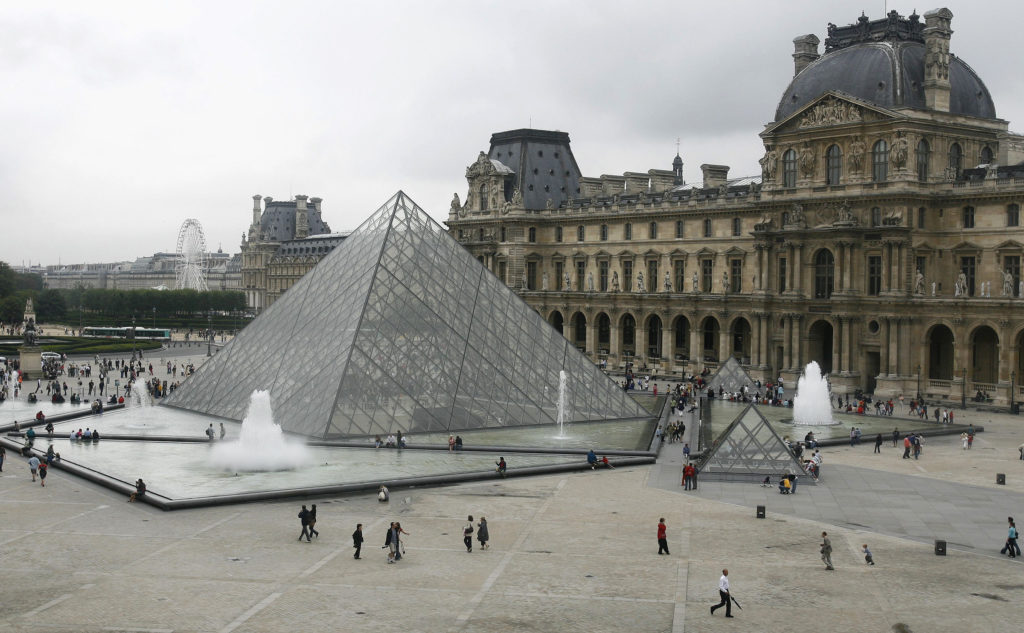 The Louvre Museum in Paris in 2007 with the glass Pyramid entrance designed by Chinese-born U.S. Architect I.M. Pei. Photo by REUTERS/Regis Duvignau (FRANCE)

His buildings added elegance to landscapes worldwide with their powerful geometric shapes and grand spaces. Among them are the striking steel and glass Bank of China skyscraper in Hong Kong and the Fragrant Hill Hotel near Beijing. His work spanned decades, starting in the late 1940s and continuing through the new millennium. Two of his last major projects, the Museum of Islamic Art, located on an artificial island just off the waterfront in Doha, Qatar, and the Macau Science Center, in China, opened in 2008 and 2009.

Pei painstakingly researched each project, studying its use and relating it to the environment. But he also was interested in architecture as art — and the effect he could create. 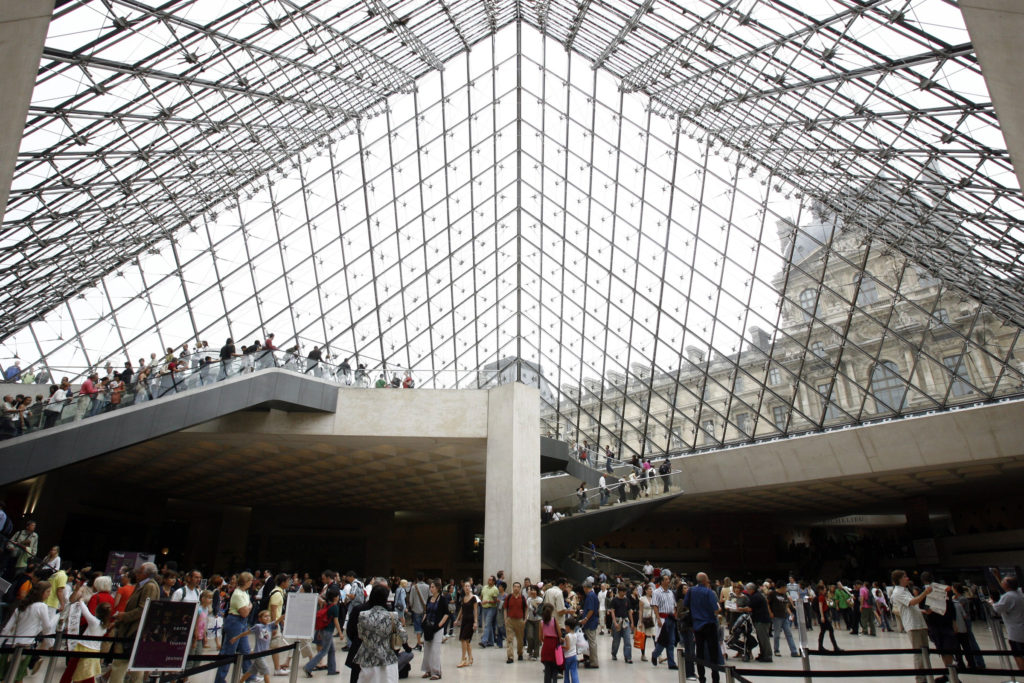 Visitors walk below the glass Pyramid entrance, designed by Chinese-born U.S. architect I.M. Pei, at the Louvre Museum in Paris in 2007. Photo by REUTERS/Regis Duvignau (FRANCE)

“At one level my goal is simply to give people pleasure in being in a space and walking around it,” he said. “But I also think architecture can reach a level where it influences people to want to do something more with their lives. That is the challenge that I find most interesting.”

Pei, who as a schoolboy in Shanghai was inspired by its building boom in the 1930s, immigrated to the United States and studied architecture at the Massachusetts Institute of Technology and Harvard University. He advanced from his early work of designing office buildings, low-income housing and mixed-used complexes to a worldwide collection of museums, municipal buildings and hotels. 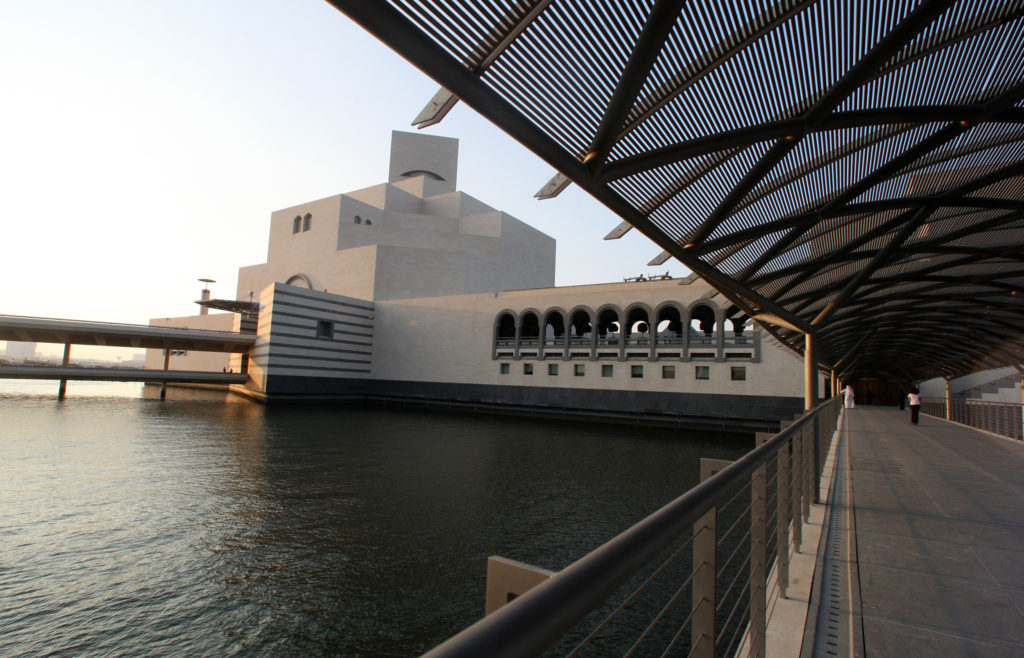 The Museum of Islamic Art is seen in Doha in 2008. The museum, designed by I.M. Pei, houses a collection of Islamic art from the 7th to the 19th century. Photo by REUTERS/Fadi Al-Assaad (QATAR)

His big break was in 1964, when he was chosen over many prestigious architects, such as Louis Kahn and Ludwig Mies van der Rohe, to design the John F. Kennedy Memorial Library in Boston.

At the time, Jacqueline Kennedy said all the candidates were excellent, “But Pei! He loves things to be beautiful.” The two became friends. 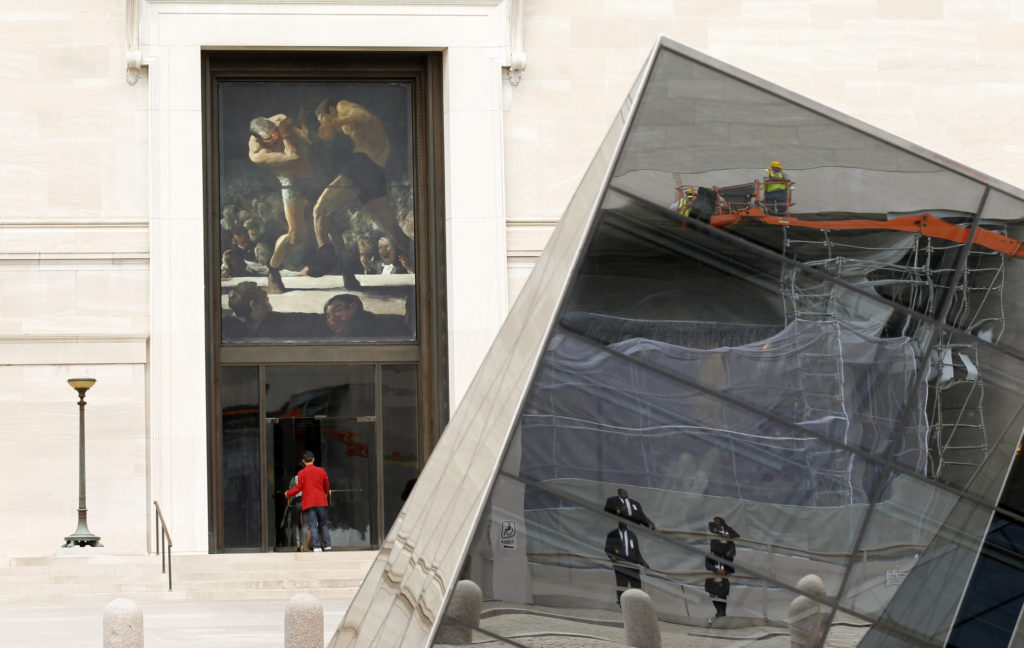 People reflected in glass pyramids outside the National Gallery of Art in Washington June 6, 2012. Photo by REUTERS/Kevin Lamarque

A slight, unpretentious man, Pei developed a reputation as a skilled diplomat, persuading clients to spend the money for his grand-scale projects and working with a cast of engineers and developers.

Some of his designs were met with much controversy, such as the 71-foot faceted glass pyramid in the courtyard of the Louvre museum in Paris. French President Francois Mitterrand, who personally selected Pei to oversee the decaying, overcrowded museum’s renovation, endured a barrage of criticism when he unveiled the plan in 1984.

Many of the French vehemently opposed such a change to their symbol of their culture, once a medieval fortress and then a national palace. Some resented that Pei, a foreigner, was in charge. 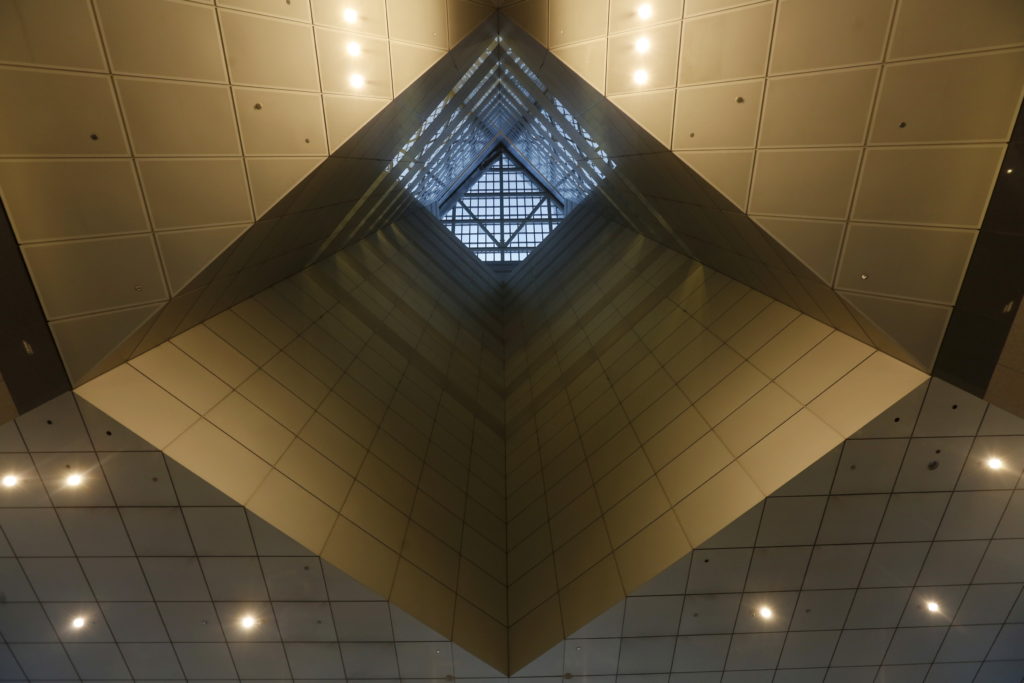 A ceiling inside the Bank of China Tower, designed by I. M. Pei and L.C Pei of I.M Pei and Partners, in Hong Kong in 2015. Photo by REUTERS/Bobby Yip

But Mitterrand and his supporters prevailed and the pyramid was finished in 1989. It serves as the Louvre’s entrance, and a staircase leads visitors down to a vast, light-drenched lobby featuring ticket windows, shops, restaurants, an auditorium and escalators to other parts of the vast museum.

“All through the centuries, the Louvre has undergone violent change,” Pei said. “The time had to be right. I was confident because this was the right time.”

Another building designed by Pei’s firm — the John Hancock Tower in Boston — had a questionable future in the early 1970s when dozens of windows cracked and popped out, sending glass crashing to the sidewalks, during the time the building was under construction. 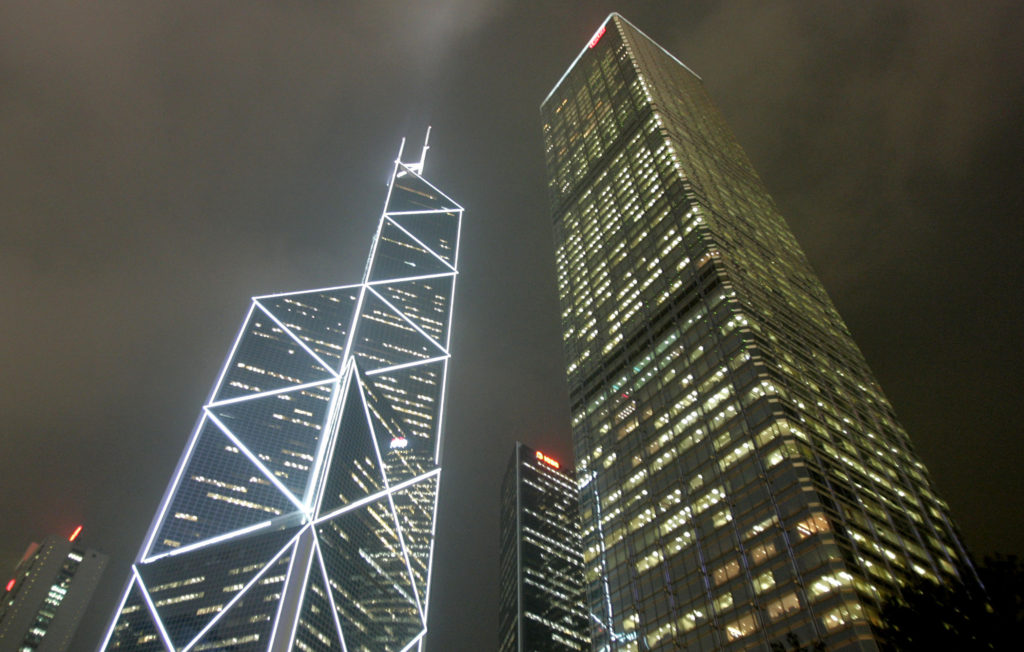 A flurry of lawsuits followed among the John Hancock Mutual Life Insurance Co., the glass manufacturer, and Pei’s firm. A settlement was reached in 1981.

No challenge seemed to be too great for Pei, including the Rock and Roll Hall of Fame, which sits on the shore of Lake Erie in downtown Cleveland, Ohio. Pei, who admitted he was just catching up with the Beatles, researched the roots of rock ‘n’ roll and came up with an array of contrasting shapes for the museum. He topped it off with a transparent tent-like structure, which was “open — like the music,” he said.

In 1988, President Reagan honored him with a National Medal of Arts. He also won the prestigious Pritzker Architecture Prize, 1983, and the American Institute of Architects Gold Medal, 1979. President George H.W. Bush awarded him the Presidential Medal of Freedom in 1992. 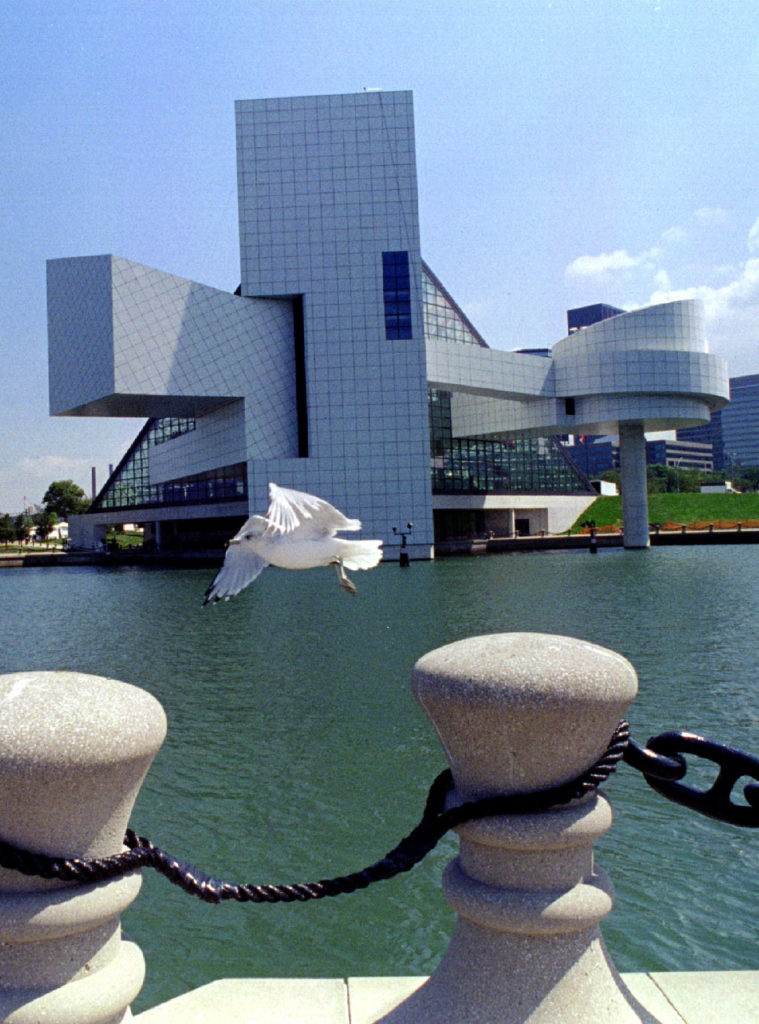 The Rock and Roll Hall of Fame sits on the edge of the North Coast Harbor in downtown Cleveland in 1995. Photo by Reuters

The museum in Qatar that opened in 2008 was inspired by Islamic architectural history, especially the 9th century mosque of Ahmed ibn Tulun in the Egyptian capital of Cairo. It was established by the tiny, oil-rich nation to compete with rival Persian Gulf countries for international attention and investment.

Ieoh Ming Pei was born April 26, 1917, in Canton, China, the son of a banker. He later said, “I did not know what architecture really was in China. At that time, there was no difference between an architect, a construction man, or an engineer.”

Pei came to the United States in 1935 with plans to study architecture, then return to practice in China. However, World War II and the revolution in China prevented him from coming back.

During the war, Pei worked for the National Defense Research Committee. As an “expert” in Japanese construction, his job was to determine the best way to burn down Japanese towns. “It was awful,” he later said.

In 1948, New York City real estate developer William Zeckendorf hired Pei as his director of architecture. During this period, Pei worked on many large urban projects and gained experience in areas of building development, economics and construction.

Some of his early successes included the Mile High Center office building in Denver, the Kips Bay Plaza Apartments in Manhattan, and the Society Hill apartment complex in Philadelphia.

Pei established his own architectural firm in 1955, a year after he became a U.S. citizen. He remained based in New York City. Among the firm’s accomplishments are the Jacob Javits Convention Center in New York City and the United States Holocaust Memorial Museum in Washington.

Above: Architect Ieoh Ming Pei gestures as he explains a model of his design for the German Historical Museum in Berlin to German Housing and Construction Minister Klaus Toepfer during a presentation in the chancellory in Bonn, Germany, in 1997. File photo by REUTERS/Arnd Wiegmann

Susan B. Anthony’s headstone gets plastic shield for voter stickers

U.S. stocks tumble toward worst day in a month amid virus woes