A journalist’s death by a repressive government, remembered in verse

Poet Alan Jenkins did not want to write “REPORTS OF MY SURVIVAL MAY BE EXAGGERATED.”

The poem was commissioned by British newspaper The Sunday Times in memory of Jenkins’ close friend, Marie Colvin. Colvin, an American journalist who reported for the Times, died in a rocket attack launched by the Assad regime in Homs, Syria; her family has sued the government, alleging her death was a targeted assassination.

In the face of his friend’s bravery, Jenkins knew he couldn’t be paralyzed by his own grief.

“Marie wouldn’t have thought very highly of my sensitive state,” Jenkins told the PBS NewsHour. “What I was supposed to do is write poems.”

“It’s frightening that criticism in an article can be brought back to punish someone.”

So over the course of three difficult nights, Jenkins wrote “REPORTS OF MY SURVIVAL MAY BE EXAGGERATED,” a snapshot of his grief and Colvin’s memory. It’s also, Jenkins said, a story of what happens when reporters risk their lives behind enemy lines.

“Marie, and many other war reporters, could find themselves in real trouble if they did or said something [against a ruling regime.] But it was what you did for a good story,” Jenkins said.

“REPORTS OF MY SURVIVAL MAY BE EXAGGERATED” is a whirlwind of shock, anger and sadness, and in rereading it, Jenkins recognizes certain parallels between Colvin’s murder in 2012 and the killing of dissident writer Jamal Khashoggi at the Saudi consulate in Istanbul, Turkey, earlier this month. Both Colvin and Khashoggi were identified as threats by governments that do not protect or respect free speech.

“Marie was killed in an attempt to silence her and others reporting from that place,” Jenkins said.

“One hundred and 50 journalists have been killed in Syria alone. It’s frightening that criticism in an article can be brought back to punish someone.”

Khashoggi disappeared after entering the Saudi consulate Oct. 2. He is suspected to have been targeted by a government-backed hit squad for his critiques of Crown Prince Mohammed bin Salman; his murder was confirmed by Saudi state media last Friday. On Sunday, Saudi Arabia’s foreign minister told Fox News that the killing was “a tremendous mistake” carried out by rogue individuals — an explanation that has been met with significant skepticism.

While The Washington Post, which published Khashoggi’s columns while he was alive, called him “the Arab world’s loudest dissenter,” Colvin was hailed by her peers as “the finest correspondent of her generation.” Jenkins knew the accolades for Colvin’s work didn’t come without a certain amount of danger, but that didn’t prepare him for her death.

“Poetry is an exclamation. It should be equipped to transcend the merely personal to reach someone else.”

“Marie’s friends had come to a kind of complacent assumption that she would always be back,” Jenkins said. “Her death was all the more terrible and shattering because we’d convinced ourselves it wouldn’t happen.”

That visceral shock appears in the first stanzas of Jenkins’ poem, which describes the harrowing image shown on Arab news stations of Colvin’s body buried in rubble. The second half of his piece takes that bitter disbelief and shifts toward a resilient acceptance, as Colvin seems to speak and comfort him about her own death. The change in perspective, Jenkins said, was hard won.

“Poetry is an exclamation. It should be equipped to transcend the merely personal to reach someone else,” Jenkins explained. “I felt crudely vindictive, and this poem made me feel like I could say something.”

‘REPORTS OF MY SURVIVAL MAY BE EXAGGERATED’
BY ALAN JENKINS

How can you be lying there?
Immodestly, among the rubble
When we want you to be here
In some other kind of trouble –

Luffing up, in irons, perhaps,
Just downstream from the Dove,
Lost in South London, without maps,
Or capsized in love.

What’s keeping you? A kind of dare?
Come back and tell us how you stayed
One step ahead, how you gave fear
The slip, how you were not afraid –

As we are. Look – here’s my idea.
Come back – this time, for good.
Leave your flak jacket and your gear
In that burnt-out neighbourhood,

And fly home, via Paris. You’ll be met.
I’ll buy a bottle from the corner store,
Like old times. You can have a cigarette.
Marie, get up off that bloodstained floor!

Tonight you threw your thin brown arm
Around my shoulders, and you said
(There was this unearthly calm)
‘Can’t you take in that I am dead?

Learn to expect the unexpected turn
Of the tide, the unmarked reef,
The rock that should be off the stern
On which we come to grief?

The lies, the ignorance and hate –
The bigger picture? No safe mooring there,
In Chechnya or Chiswick Eyot.
Those nights I drank my way out of despair,

And filling ashtrays filed the copy
You would read – or not read – with
A brackish taste and your first coffee
Contending on your tongue; while Billy Smith,

My street cat rescued from Jerusalem,
Barged in, shouting, from his wars….
As many lives as his – and now I’ve used them.
I wish I’d made it back to yours.’ 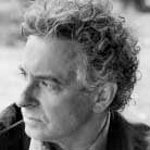 Alan Jenkins lives and works in London, where he is deputy editor and poetry editor of the Times Literary Supplement. He has won several awards for his collections of poems, the most recent of which are Revenants; Marine (in collaboration with John Kinsella); Paper-Money Lyrics and Tidemarks. White Nights, which includes his translations from French and Italian poets, was published earlier this year in the U.S. He has taught creative writing in London, Paris and the United States, and until recently was Poet in Residence at St. John’s College, Cambridge.

Left: Rosemarie Colvin, mother of journalist Marie Colvin who was killed in Syria, holds a rose at the Newseum's Journalists Memorial in 2013. Photo by KAREN BLEIER/AFP/Getty Images