Hall said he saw no reason to spend life writing poems “unless your goal is to write great poems.”

Hall was a prolific author and champion of poetry who published more than 50 books and participated in thousands of poetry readings. He died at his home in Wilmot, New Hampshire, the idyllic setting through which he found boundless inspiration later in his career.

Born and raised in Connecticut, Hall began writing poetry as a teenager. An early love of monster movies led him to Edgar Allan Poe, while hanging around with Yale students inspired him to buy his own collection of T.S. Eliot. “I decided that I would be a poet for the rest of my life and started by working at poems for an hour or two every day after school. I never stopped,” he told the Paris Review in 1991.

At 16 he attended the prestigious Bread Loaf Writers’ Conference, along with Robert Frost. He earned degrees at Harvard and Oxford, became the first poetry editor of the Paris Review and spent years teaching at the University of Michigan before returning to New England with his second wife. 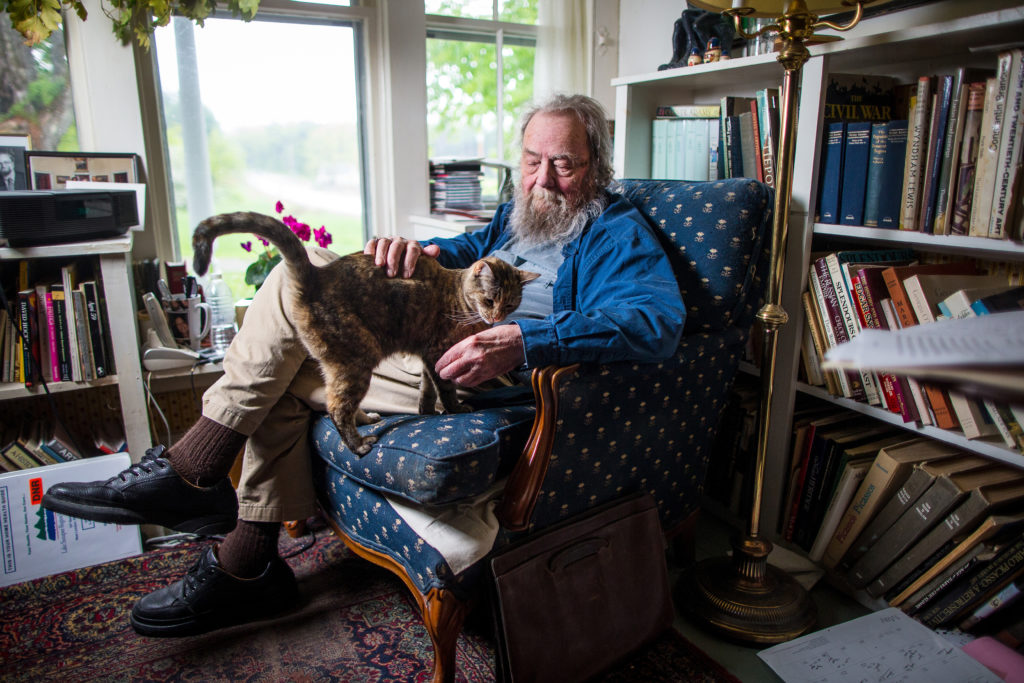 Poet Donald Hall poses for a portrait at his home in Wilmot, N.H. Photo by Aram Boghosian for The Boston Globe via Getty Images

The late poet Jane Kenyon shared Hall’s pastoral eden and life of writing on Eagle Pond Farm, the New England homestead that belonged to his family for generations.

“We wrote in the morning and I wrote in the late afternoon, too, but in between we had a quiet period together where sometimes we would play ping pong,” Hall remembered in a 2011 interview with the PBS NewsHour.

After 23 years of marriage, Kenyon died from leukemia at age 47 in 1995. Her death greatly influenced Hall’s work, motivating heartbreaking meditations on loss and solitude in the years since her death. In his 1999 collection “Without,” he shared his grief as well as the humorous, quiet moments in-between:

Overcome with dread,
they wept and affirmed
their love for each other witlessly,
over and over again.
When it snowed one morning Jane gazed
at the darkness blurred
with flakes. They pushed the IV pump
which she called Igor
slowly past the nurses’ pods, as far
As the outside door
so that she could smell the snowy air.

When Hall was awarded the National Medal of Arts in 2010, President Barack Obama’s statement declared that Hall’s “work inspired Americans and enhanced the role of poetry in our national life.” Hall won a National Book Critics Circle Award, membership in the Academy of Arts and Letters, two Guggenheim fellowships and a Caldecott Medal for his children’s book “Ox Cart Man,” among other accolades.

Hall was not awarded a Pulitzer Prize, and was critical of what he viewed as mediocrity in the poetry world. In his 1983 essay “Poetry and Ambition,” he said the honor was often received by poetry’s “Ronald McDonalds” who “write and publish the McPoem — ten billion served — which becomes our contribution to the history of literature.”

“True ambition in a poet seeks fame in the old sense, to make words that live forever,” he wrote.

Throughout his career, he championed the craft of writing well, through teaching and in a 1973 book of the same name.

Hall said he saw no reason to spend life writing poems “unless your goal is to write great poems.”

Read a selection of Hall’s work below:

At sixteen he dismisses his mother with contempt.
She hears with dread the repulsive wave’s approach
and her fifty-year-old body smothers under water.

An old man loses half his weight, as if by stealth,
but finds in his shed his great-grandfather’s knobbly cane,
and hobbles toward youth beside the pond’s swart water.

She listens to the dun-colored whippoorwill’s
three-beat before dawn, and again when dusk
enters the cornfield parched and wanting water.

He imagines but cannot bring himself to believe
that the dead woman enters his house disguised
or that the young rabbi made vin rouge from water.

Within the poem he and she—hot, cold, and luke—
converge into flesh of vowels and consonant bones
or into uncanny affection of earth for water.

“Convergences” from THE BACK CHAMBER: Poems by Donald Hall.

Also published in the Poetry Foundation “Poetry Magazine” in January 2010