After Hurricane Maria, Puerto Rican poets ask again what it means to belong

The first incarnation of New York’s Nuyorican Poets Cafe was Miguel Algarin’s East Village living room. He, along with other Nuyorican artists, writers and poets, wanted a place where they could showcase the work often shunned by mainstream academic and literary institutions. 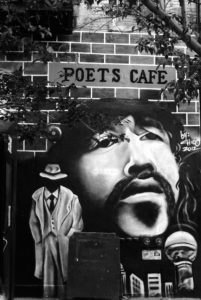 The term “Nuyorican” stands, in part, for the literary, intellectual and artistic movement that came from a community of New Yorkers with Puerto Rican heritage. For many who identify as both New Yorkers and Puerto Ricans, the concept of identity is both fluid and complicated.

The cafe’s earliest days focused on the activism and work of Nuyorican artists but has since diversified, said Daniel Gallant, executive director of the cafe.

“We find that many of our events seem to resonate with and attract artists and spectators who are kind of negotiating between a variety of cultural identities,” he said.

For Puerto Ricans living in New York, “there were sort of parallel challenges and parallel sources of both pride and frustration … the idea of being part of a political entity that was vastly powerful and wealthy and yet not being able to benefit from or be on equal footing with some of the other citizens and residents of that entity,” Gallant said.

“We find that many of our events seem to resonate with and attract artists and spectators who are kind of negotiating between a variety of cultural identities.”

Pedro Pietri was a founding member of the cafe and leader in the Nuyorican literary movement. Born in Ponce, Puerto Rico, and raised in Manhattan, Pietri typified Nuyorican poetry, most famously with his poem “Puerto Rican Obituary.”

Caridad De La Luz, or La Bruja as she’s known onstage, got her start in spoken-word poetry at the cafe. She said her connection with Pietri, the “godfather” of Nuyorican poetry, runs deep.

She first saw his poem “Spanglish National Anthem” on a poster in 1992 and was hooked.

“That was it. Like, when I read it, I just felt immediately connected and was like ‘wow, this represents me,’ and I had the hopes of doing something like that one day,” she said.

De La Luz began writing more fervently and in 1996 had her breakout performance at the Nuyorican Poets Cafe. Pietri was there.

“He was in the back of the room,” she said. “He approached me and told me that my poetry was far out.” 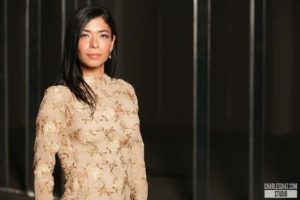 Pietri became her mentor, cast her in his show “El Spanglish Language Sandwich,” and the pair began travelling and performing together.

De La Luz said her work became very Nuyorican under Pietri, exploring the shifting identity of the Puerto Rican New Yorker, the feeling that you belong and that you’re an outsider all at once. “Puerto Ricans are fascinating because we — like constantly — are in the search of identity,” she said. “Who are we, really? What are we, really?”

The aftermath of Hurricane Maria — the humanitarian crisis and controversial federal response — highlighted that sense of not really belonging, both De La Luz and Gallant said.

“Those who come to our venue to share their thoughts and hopes and fears sense that there is almost a step backwards for the island,” Gallant said. “And that Puerto Ricans, Nuyoricans, at least at the federal level, are once again, if not more than before, being treated as second-class citizens.”

Nuyorico…
That place somewhere between The Empire State and El Morro
Down a dripping pipe that lands pitter pat on Mami’s broken back
For lifetimes attacked
Placed on frontlines to fight for what we will never get back
But the soil is still fertile unlike the colonized spirit of the
Mass graves of the enslaved that chanted but no one could hear it
‘Cause our heads are so far up our own asses
We can’t tell the unnatural from the natural gases
But best believe we still manage to breathe
And pull out in time so we won’t have to breed
Another generation of the ill conceived
Born in search of truth but perpetually deceived
Told that we are free but we cannot leave
Nuyorico…
That place that we live for
Papi said, “Americanos no tienen accentos”
Americans don’t have accents
Except the kind you sprinkle on your food and pretend
That compared to Abuelita’s cooking
Your cooking’s just as good
Yeah! Pour some more on for me
Call it Sazon, even though it’s made by Pillsbury
So obvious when the main ingredient is MSG
The message is to love all that isn’t we and
The doughboy in the White House just goes “hee hee hee”
World War I, World War II, World War Infinity
But resistance existed through Word War divinities
Coming in the form of “El Reverendo” Pedro Pietri
Who fought a war of no good and plenty
Still he speaks to our people
Forcing us out from behind tenement peepholes
To find a place where we can all feel equal
And realize all along your heart knew you were so Rico
When you realize that, that’s when you’re there
Welcome to Nuyorico…