Amal Kassir says she knows she’s lucky. Born of an American mother and Syrian father, she was raised in Denver, but lived for many years in Syria. She says her time in Syria helped her understand the suffering of the people there — especially the rural farmers and children — while the freedoms she has living in the U.S. has allowed her to become an activist on their behalf. 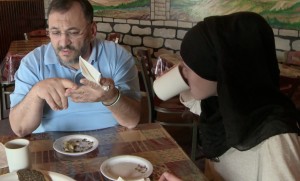 Amal Kassir sits with her father at his Syrian restaurant Damascus Grill, in Littleton, CO.

“Syria is my home, I know what it is. But America gave me the ability to see things that I would not have otherwise been able to see in Syria, and I am a voice of the revolution, because the United States gave me a stage and gave me the opportunity.”

Now an 18-year-old college student in Denver, Kassir attends classes and works at her father’s Syrian restaurant, Damascus Grill, in Littleton, Colo., during the week. On the weekends, she tours the United States, performing her slam poetry at festivals and political rallies. Her poetry often blends images of simple family pleasures in Syria with the contrasting harsh treatment of government soldiers, as in “My Grandmother’s Farm,” a work she performed recently on the campus of the University of Colorado Denver.

Kassir has also been part of a Denver-based slam poetry team called Minor Disturbance. In 2012 she won the Grand Slam prize at the Brave New Voices International Youth Competition for a poem called “Syria.”

Kassir’s newest project is called Project More Than Metaphors. She is raising money to travel to refugee camps in the Middle East to work with young Syrian children there, using words and poetry to help deal with the trauma they’ve experienced in their young lives.

Watch a profile of Amal Kassir that aired on Monday night’s broadcast of the PBS NewsHour.