As a professor of African American studies, poet Elizabeth Alexander can’t reflect on Martin Luther King Jr. Day without taking into account the full context of the man and his vision.

“I can’t untether myself from history,” Alexander told Art Beat.

When Alexander offered her own work in commemoration of the MLK holiday, she pulled together a series of poems that contemplate a range of history.

“I wanted to let us think about him in place and over time in hopes that that would give us a little bit more to chew on in thinking about what this day means.”

And thus, Alexander begins with “Emancipation.”

Nineteenth century corncob cosmogram
set on the dirt floor, beneath the slant roof,
left intact the afternoon
that someone came and told those slaves

Before Alexander continued reading, she brought up some famous words from Dr. King, which he spoke a few days before his death in April 1968: “I may not make it with you. I may not make it to the mountaintop.”

“There are other leaders, flawed and imperfect, who didn’t get there with us, if you will, but who tried to envision freedom,” she said.

And so, contemplating “charismatic leadership and how sometimes it fails,” Alexander read another poem that takes place, still, before the slaves were emancipated. The poem, “Nat Turner Dreams of Insurrection,” includes an epigraph from his 1832 confessions.

Nat Turner Dreams of Insurrection
… too much sense to be raised, and if I was,
I would never be of any service to any one as a slave.
The Confessions of Nat Turner, 1831
Drops of blood on the corn, as dew from heaven.
Forms of men in different attitudes, portrayed in blood.
Numbers, glyphs, on woodland leaves, also in blood.Freedom: a dipperful of cold well water.
Freedom: the wide white sky.
Dreams that make me sweat.Because I am called, I must appear so, prepare.
I am not a conjurer. Certain marks on my head and breast.
Shelter me, Great Dismal Swamp. A green-blue sky which roils.

Although Alexander doesn’t have poems written directly about Martin Luther King, she considers him an artist in his use of language.

“He said it himself. I’m not trying to do more with that, but what I can write about and what I did write about was different ways that his vision was made manifest by different people at different points in time.”

Alexander also brings in her own life and her own experience to contemplate King’s vision. She was a child in Washington, D.C., at the time and her father was active in the civil rights movement. In her poem, “Fugue,” Alexander brings in that personal perspective, bringing us up to and through the time when King was assassinated and “how startling and strange and frightening that was.”

Fugue
1. Walking (1963)
after the painting by Charles Alston
You tell me, knees are important, you kiss
your elders’ knees in utmost reverence.The knees in the painting are what send the people forward.Once progress felt real and inevitable,
as sure as the taste of licorice or lemons.
The painting was made after marching
in Birmingham, walking

into a light both brilliant and unseen.

2. 1964
In a beige silk sari
my mother dances the frug
to the Peter Duchin Band.Earlier that day
At Maison Le Pelch
the French ladies twistedher magnificent hair
into a fat chignon
while mademoiselle watched,

ness as the ladies worked
in silence, adornment
so grave, the solemn toilette,

3. 1968
The city burns. We have to stay at home,
TV always interrupted with fire or helicopters.
Men who have tweedled my cheeks once or twice
join the serial dead.Yesterday I went downtown with my Mom.
What a pretty little girl, said the tourists, who were white.
My shoes were patent leather, all shiny, and black.
My father is away saving the world for Negroes,
I wanted to sayMostly I go to school or watch television
with my mother and brother, my father often gone.
He makes the world a better place for Negroes.
The year is nineteen-sixty-eight.
4. 1971
“Hey Blood,” my father said then
to the other brothers in the street.
“Hey, Youngblood, how you doin’?”Peace and power,” he says,
and “Keep on keepin’ on,”
just like Gladys Knight and the Pips.My stomach jumps: a thrill.
Sometimes poems remember small things, like
“Hey, Blood.” My father
still says that sometimes.

When Alexander reflects on this holiday and the progress we as a country have made, it’s clear that she takes into account the generations and generations of leadership that have fought for the ideals that King stood for.

“There are people before him, alongside him and after him, who are part of the movement towards justice or what we might call freedom.”

That “generational transition of freedom visions and leadership” is not always so easy or so successful.

The Elderswatched him glitter,
watched him gleam,
shook his un-rough hands
with their cotton-scarred hands,
cut their eyes at him,
observed the ease with which he smiled,asked, finally, what is love,
and who are The People
and how must we love them and what do we need,
what is now, look at the lines
in the corner of youngblood’s eyes,
lined not unlike our hands,
and perhaps this is not gleam but illumination,
not merely his but ours.

Alexander tries to learn more about King every year. She continues to think “more deeply about what moves us forward and what holds us back.”

As part of this exercise, she challenges others to join her.

“If each of us can take a measure more of responsibility to think about what makes our environs more just … that actually goes a long way towards moving forward the dream.” 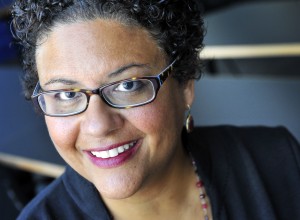 A poet, essayist, playwright, and teacher, Elizabeth Alexander is the chair of the African American Studies Department at Yale University. She has published six books of poems, including her most recent “Crave Radiance: New and Selected Poems from 1990-2010” (Graywolf, 2010) and “American Sublime” (Graywolf, 2005), a finalist for the Pulitzer Prize. For President Barack Obama’s inauguration on Jan 20, 2009, she read “Praise Song for the Day,” a poem she composed for the event. “Praise Song for the Day” has since been published by Graywolf Press. Alexander was raised in Washington, D.C.

“Emancipation,” “Nat Turner Dreams of Insurrection,” “Fugue” and “The Elders” are reprinted by permission from “Crave Radiance” (Graywolf, 2010). Copyright © 2010 by Elizabeth Alexander.

Photo of Elizabeth Alexander with each audio file by CJ Gunther