Of black shootings by police, poet asks: When will it stop?​

Poet Ed Pavlic has often written about the complicated relationship between black men and the police. Much of it comes from personal experience.

Many of Pavlic’s friends growing up were African-American, and he himself has dark skin. He said most people assumed he was black, which meant that as soon as he and his friends hit puberty, there were confrontations with police.

“All of a sudden there was a different energy and intimidation that police were directing our way. Parents, uncles, older siblings of my friends told us about it, saying, ‘This is the age that these things are going to happen to you.’ But it was a surprise to us.” 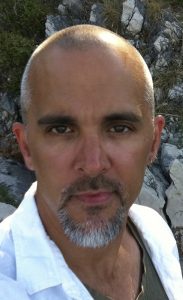 Two years ago, Pavlic’s book, “Visiting Hours at the Color Line,” was nominated for an award that is given to writers of color. After realizing their error that he is not a writer of color, the nomination was withdrawn, but the incident spurred Pavlic to write a new series of poems.

“I decided I had to write something that takes a more explicit approach to this kind of strange place I have lived my life. Back and forth across the color line.”

The result was “All Along It Was A Fever,” a lengthy meditation on race in America. Much of it deals with the violence that Black America experiences.

“I felt that I had a vantage point to things that were going on, based on this fluidly trans-racial, multi-racial life I’ve led. I think I see things in a different light than your average commentator on CNN.”

Pavlic says the confrontations with police that he and his friends experienced have been happening for a long time, but it hasn’t been until recent years when they’ve been captured on cellphones and distributed through social media that they’ve gotten attention by mainstream media.

“Part of the rage and and anger and desperation that erupts with every new killing is because it’s so familiar. Black parents are thinking we went through this, now it’s our kids. Are our grandkids also going to have to go through this? When will it stop?”

Passage “XXIV” has particular resonance right now, in the wake of the most recent wave of police shootings in Louisiana and Minnesota. Two years ago when Pavlic was writing this poem, there were other high profile shootings in the headlines. “I began by asking, what is the target of these shootings? And my answer is the thing being targeted is the space between people.”

Pavlic argues that throughout American history, blacks haven’t been seen as individuals; they’ve been seen as a group.

“So when a cop is looking at black man, he doesn’t see one man. He sees a blur of people that he associates with this one man. And the confusion and terror among black men is that they understand that. They realize they aren’t being seen as an individual, but as an imagined creation based on other people. That is a terrifying thing.”

Read next: How poetry helped Marcelo Hernandez Castillo speak out on immigration

Pavlic believes that the only way to get beyond the racial violence is for white people to acknowledge and embrace the fact they live in a trans-racial or multi-racial culture.

“They owe their lives to a multi-racial dynamic in this country. And the sooner they practice being a part of that world, the sooner all of this stuff will take a different shape.”

All Along It Was A Fever – a what poem

The violence (always?) inherent in seeing
people for what they are, in history, which means
seeing them for what they aren’t which
means not seeing them. And which means seeing
them which means us. Like, what
were they all screaming at what,
exactly, are they (you think it matters who?) shooting at what
are they really aiming at and there just ain’t no who
without that what. And it’s not only the police.
Stop thinking it’s just police. Every single American
institution aims itself at what it imagines (because it won’t imagine what)
goes on between us. Every single one
of us. Which us? Whichever us, all of us. At bottom,
the police defend, and the military
extends, and the prison system—which, no matter what
the law says, imprisons people according to what
they have in common—defines this basic American
institutional force: the genocidal (always?) system of individuation
which is policed by violence against what’s between us.
An unmapped, trans-personal power: the illicit dark energy
of modernity. That image which is us which is
the only image we have in history which is ours simply

because the simplicity of its complexity is unrecognized in history.

[Ok, then, follow me, white people have become what
they are not because they’re pale and they’re not born white.
Moreover this has almost nothing at all to do with Europe.
They’re white because they’ve allowed or convinced
or bludgeoned and forced the world—which for these purposes
means themselves or at least that’s what a white person
would have to think—to believe that there’s nothing essential
in the space between them.]

And this is true for no one which is the whole point.

With this two difficult and crucial matters of intelligence appear:
first, the only way to remain a law abiding citizen
of this country is to agree to commit and replay its crimes
against yourself; and, the reason that the “nothing-
between-them” people aren’t profiled by police isn’t because they’re what
they think they are, white, because they’re not.
They’re mostly often left alone because they’re still
in their cage. Scared. Of what? The bars of the cage are made mostly
of the nothing between them. The bars are really wisps
of smoke. Believe it or not at bottom
the police are there to serve and protect that
illusory empty space. To enforce that illusion
which no black person can vouch for.
Black people’s presence—in peril and in power—
here has confounded claims
of such emptiness and so that presence is
targeted. Understand that the crimes of the country
in this regard are what
is called normal—and so are what’s known
as legal—which makes the actual, palpable, living thing
between you and the person next
to you a strange, likely fugitive—not to say criminal—energy.

That energy is fugitive and criminalized because—in a world policed
to defend this deadly American illusion—the living thing between us
remains far truer than it is real,
which, among other things, is why this is (what?) a poem and why you’re wondering what
it means.

Ed Pavlic is a professor of English and creative writing. He is the author of seven collections of poetry and two critical studies, including “Let’s Let That Are Not Yet: Inferno”, “Who Can Afford to Improvise?: James Baldwin and Black Music, the Lyric and the Listeners”, “Visiting Hours at the Color Line” and “But Here Are Small Clear Refractions.”

His next book, “Live at the Bitter End: A Trial by Opera” (Sheep Meadow Press/UPNE), will be released in the fall of 2016. Among his current projects are a nonfiction work, “No Time to Rest: James Baldwin’s Life in Letters to His Brother David,” and a novel, titled “Another Kind of Madness,” set in Chicago and tuned to the sound of Chaka Khan.

Left: A boy sits near messages written in chalk as demonstrators protesting the shooting death of Philando Castile gather in front of the police department in St Anthony, Minnesota, July 10, 2016. Photo by REUTERS/Adam Bettcher