Bukowski’s poems were mangled by editors after his death. Now you can read his originals

When Abel Debritto first started researching and writing about Charles Bukowski, he knew that the prolific underground poet, short story writer and novelist, who had written thousands of poems in his lifetime, had been posthumously edited. He knew that some of the poems that had come out after his death seemed very unlike what he had published during his life. But he didn’t know how much had been changed — or how badly.

But as Debritto, a scholar who has edited books about Bukowski’s poetry on love, cats, and writing, began looking into his Bukowski archives and original manuscripts, he grew appalled. Instead of the love-it-or-hate-it but very recognizable voice of the “King of the Underground, “the “Dirty Old Man,” the womanizer (many would say misogynist) and drunk who favored the raw and the obscene, Debritto found fluffy imagery and trite language laced throughout his posthumous poems.

“Some of the changes are so awful, it’s almost embarrassing,” said Debritto, citing as example a 1992 poem Bukowski originally entitled “stone tiger, frozen sea,” which had been completely reworked for another volume of posthumous poetry with just two lines left unchanged. Its new title: “like a dolphin.”

“Bukowski was not a dolphin kind of guy,” said Debritto. “He was talking about spiders and dying mockingbirds and flies trapped in his poetry. It’s a very trite image, and very embarrassing to see a poem like that as a closing piece of the book. To me it ruins the whole book.”

Debritto found many other drastically altered poems, and though he does not point fingers over whose editing was responsible, he has made it his goal to bring the original poetry to light.

In a new book, “Storm for the Living and the Dead: Uncollected and Unpublished Poems,” out Tuesday, Debritto seeks to right what he sees as a wrong, calling it the first Bukowski collection in 25 years to “faithfully reproduce” the poems as they were originally written.

(The collection also includes a number of original Bukowski sketches.) 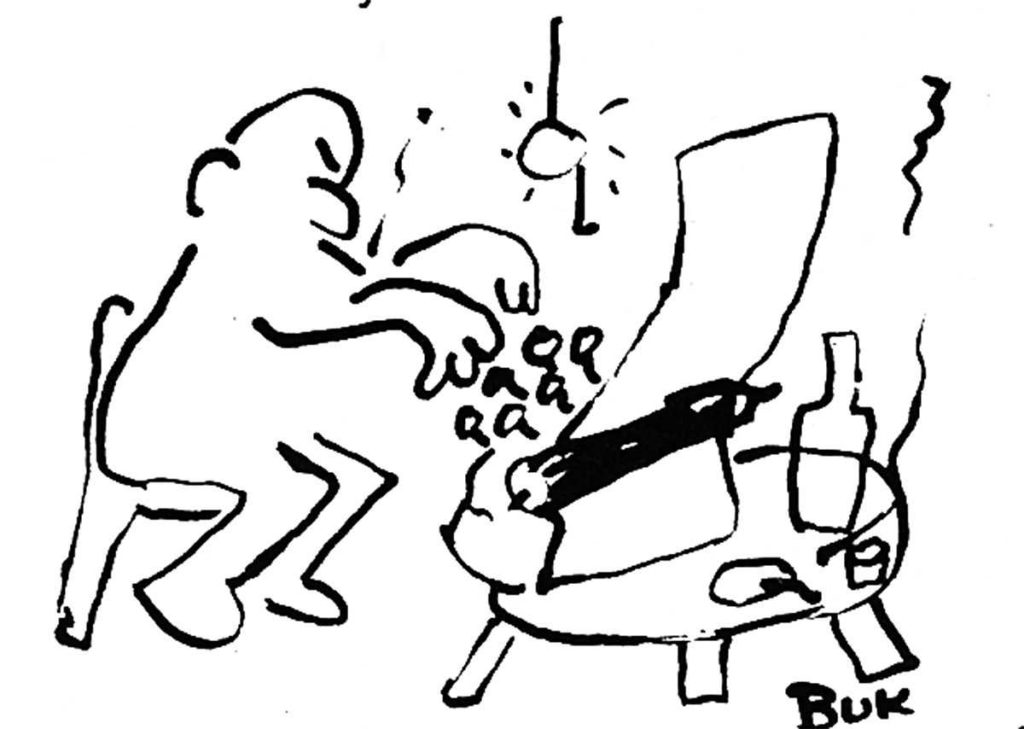 Debritto is not the first to identify the mangled poems. Los Angeles-based author and musician Michael Phillips, among others, identified the problem on his blog in 2013, writing that he noticed that posthumous Bukowski poems seemed very different, and had “wholesale removal of references to drinking, drugs, sex and madness” — all key subjects in Bukowski’s poetry.

In Debritto’s new collection, we see an unrestrained Bukowski writing of men’s crappers and tonguing a woman and cheap wine and junkies and anger at the censors. We see Bukowski grapple with his own mortality: “Charles Bukowski, dear boy, / the game is ending and you / never got / past midfield, / punk.” We even see a side of the poet that’s more tender, though never trite, such as the last poem in the collection, titled “song for this softly-sweeping sorrow…” which is reproduced in full below.

Read the poem “song for this softly-sweeping sorrow…” in full below.

“song for this softly-sweeping sorrow…”
By Charles Bukowski

one must arise
above all this shit,

keep growing…
destiny is only a whore if we make her
so.
let’s light lights
let’s suffer in the grand style —
toothpick in mouth, grinning.
we can do it.
we were born strong and we will die
strong.
the manner of our living
like ocean liners in the fog…
thorns on roses…
blasé boys trotting the parks in swim suits…
it has been very
good.
our bones
like stems into the sky
will forever cry
victory.

Abel Debritto, a former Fulbright scholar and current Marie Curie scholar, works in the digital humanities. He is the author of “Charles Bukowski, King of the Underground,” and the editor of the Bukowski collections “On Writing,” “On Cats,” and “On Love” as well as the poetry collection “Essential Bukowski.”