Prison literature has a long and rich history, stretching back to Jack London, Nelson Algren and Malcolm X. The genre includes powerful work from prisoners incarcerated on death row, which is often surfaced with the help of activists or artists in the outside world. The latest of these projects, “San Quentin Artists,” publishes art and poetry made by death row inmates at San Quentin State, California’s oldest prison and the only one in the state with death row inmates.

Nearly 750 people are currently on death row at the facility, which has a gas chamber, though no prisoner has been executed there since 2006. A recent measure upheld by the California Supreme Court, however, could allow executions to resume.

Arts of San Quentin, published by London-based artist Nicola White, gives an online platform to a number of death row inmates’ work, all made in solitary confinement. “Every man is worth more than the worst thing they have done,” White said by phone from London, where she has also put the inmates’ work on display. “The poetry has a way of expressing emotions that have been frozen in a lot of these prisoners. Because no matter how damaged or worthless people feel, there is something beautiful, and poetry and art has a way of bringing that out.”

Among the prison poets White publishes is Bill Clark, who began writing poetry after he arrived on death row in 1998. Clark, who was convicted the year before of a double murder involving a computer store robbery, maintains his innocence. For him, poetry is both therapeutic and instructive.

“It helps me analyze and scrutinize how things are affecting me and affecting others,” he said, speaking over a prison phone line last week. “It helps me cope with the fact that I’m here. That I must maintain my sanity, integrity, sense of humanity and humor. I’ve written poems about death row that are actually amusing. I find a lot of self-realization in my poetry.”

Several of Clark’s poems also use metaphors to make sense of his experience behind bars. In one poem, called “Pure Lust,” he appears to be longing for a woman, but that woman stands for freedom. “I yearn, I thirst, I hunger,” he writes. “I want her back. Will she give in? Who is this woman? Her name is Freedom.”

These days, Clark, who also draws cartoons, said he more often writes children’s books than poetry. Clark, who has four children, remembers how much joy it brought them to read together and said that after years of writing often grim poetry, he wanted to “write something more positive.” 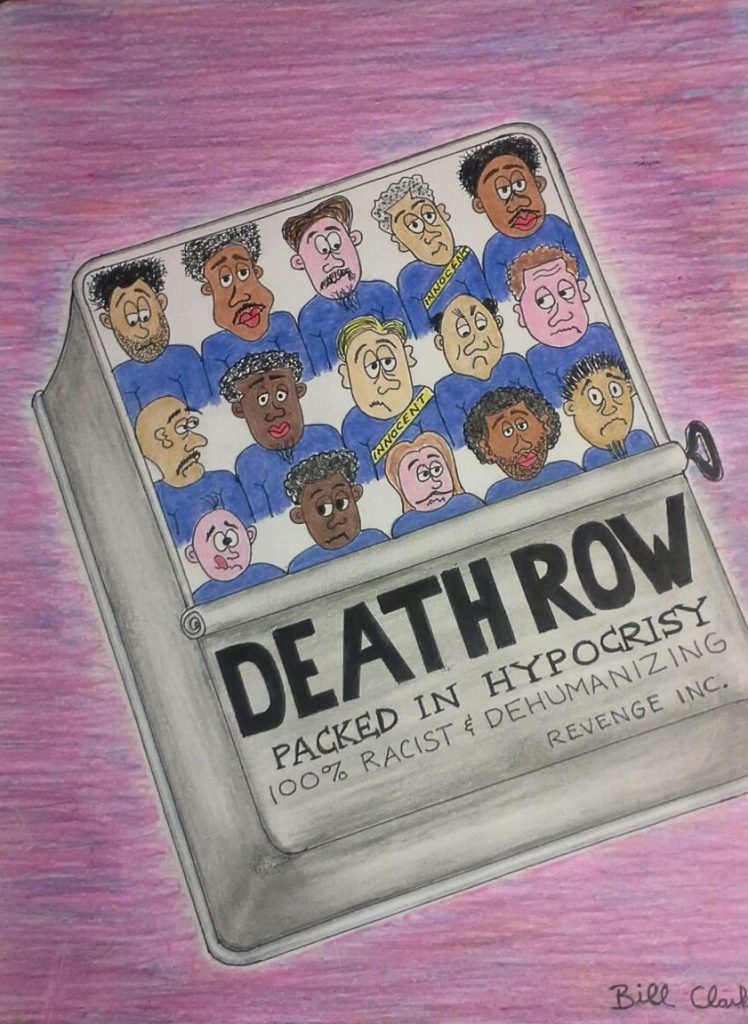 “Hypocrisy,” a cartoon by inmate Bill Clark meant to satirize the racism he sees in police lineups.

Another prison poet White publishes is Steve Champion, also known as Adisa Kamara, who first got Clark into writing poetry. Champion, a former Crips gang member who was convicted of two counts of murder after a home burglary, is today a well-known prison rights advocate who went on hunger strike in 2012 over the treatment of prisoners at San Quentin.

Champion said he started reading and writing shortly after his conviction. “When I was convicted I had to ask myself some hard questions,” he said. “And once I knew I was coming to San Quentin and death row, I sort of instinctively knew it would be important for me to read and study and learn about myself and the world.”

Out of that reading came poetry, which Champion said “always gives you a glimpse about certain aspects of yourself.”

“You think you’ve got yourself nailed down and then this other layer comes out,” he said. “We’re all evolving and growing and learning things.”

This was a point White stressed when talking about the work San Quentin’s inmates produce, arguing that many people who were on death row are no longer the same person they were when they came in.

“Steve Champion has been in since 1981. He’s since gone on a journey to transform himself form a thug to an enlightened person with a genuine lesson to share. If he were to be executed next month would the world be a safer place? Certainly not,” she said.

Among the lessons Champion wants to share is what he sees as the racist underpinnings of America’s prison system. Champion’s poem, “Transported to Another Time,” was inspired by one of his evidentiary hearings, where he said he saw the vastly different outcomes for people who had resources, access and money, and those who didn’t. The hearing also called to mind for him images of the slave trade because he was put into heavy shackles.

“But I also drew strength from thinking about that, thinking of people packed in a boat like sardines” during the slave trade, he said. “I think: ‘What are you complaining about?’ There is no universal principle in the world that says life is going to be fair.”

Champion also maintains his innocence of the crimes for which he’s been convicted, though he chronicles his life in the Crips gang and the changes he’s undergone since in a memoir called “Dead to Deliverance.”

“Definitely if I could relive that period of my life I would relive it,” he said. “But you can’t simply freeze people in time and look at them in the worst possible moment of their life and say that’s all they are and all they’ll ever be.”

Read Champion’s poem, “Transported to Another Time” below or listen to him read it aloud here.

Transported to Another Time
By Steve Champion

I’m seated on the auction block of the courtroom.
Curious spectators wait to witness a legal lynching.
The court stenographer chronicles every spoken word,
History will not forget this day.
Waist chains gird my wrists and waists.
Lay shackles fastened to my ankles,
I’m transported to another time when men hunted men, cruelly enslaving them.
Not as prisoners of war but for profits.
I am a commodity reduced to invisibility,
where batteries of neuro psychologists and psychiatrists
are paid thousands of dollars not to testify about my humanity,
but about my saneness, my fitness to be tried,
to be executed.
Every morning the sun rises I chant an African battle hymn.
Every evening the sun sets I chant a freedom song.
I am stronger today than I was yesterday but not as strong as I will be tomorrow.
Victory is mine.
County jail buses are vessels containing black, brown and white bodies.
I am transported to another time where slave ships have morphed into slave buses.
Where slave fort is the new prison fort.
Where a whip, a rope, a chain utilized to punish, brutalize and control
are updated to tasers, pepper sprays and stun guns.
Commanded by men and women who wear green, the color of money, the color of greed.
I’m transported to another time when I’m poked and prodded.
Flanked by armed guards. Misdirected and directed to kneel, to be still.
And when the shackles come unclamped, I am not free to walk out of a prison, but into a cage, another fort where I sleep until I am transported to the plantation ,
again.

Read more writing and see more art by inmates at San Quentin here, here, here and here. San Quentin also has an official arts in corrections program, which you can read about here. And a new podcast called “Ear Hustle” is made inside the walls of San Quentin; listen to that here.

Nicola White is a London-based artist who has been working with inmates since 2015. Her other artwork is made from objects she finds while mudlarking along the banks of the River Thames. More of her work can be seen at www.tidelineart.com. More of Steve Champion’s poetry can be read here.

Left: An artwork from Tauno Waidla, an imate at San Quentin, published by the project San Quentin Artists. Courtesy of Nicola White