In the United States, the small American family farm has been in decline since the 1930s; “today’s farms are fewer and larger,” the U.S. Department of Agriculture said in its most recent food statistics report. The same can be said for poet Knud Sørensen’s native Denmark, where high-tech, large-scale agriculture has also increasingly replaced small Danish farms.

In addition to writing prose, biographies and poetry, Sørensen worked as a land surveyor in rural Denmark for nearly three decades, watching first-hand as many of these changes were taking place and often writing about what he saw. Now, those poems have been collected in the new book “Farming Dreams,” which was translated from Danish to English by Michael Goldman. 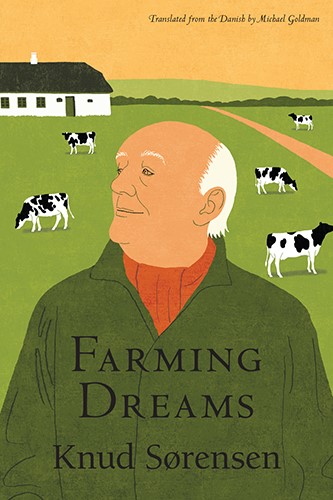 “It was a really turbulent time in Denmark. He saw farmers going bankrupt, farming communities dissolving,” said Goldman, whose own hometown in Southern New Jersey has lost almost all of its farms. “He was right in the middle of it out there, restructuring roads, redrawing lines. And so in the day he was working on that, and at night writing down the changes he saw.”

In many ways, this collection serves as both a celebration of the earth and a warning of how much can be lost. In the poem “While We Still Have It,” Sørensen writes of the beauty of the grain, beets and crops, which may not be here forever; in “The Map Has No Symbol For Pain,” he argues that a map cannot fully capture the momentous changes that happen to the land. The collection is also an elegy to the vanishing farming communities, perhaps most notably in the poem “When Hans Nielsen’s Farm Was Cut in Half by the Country Road.”

But Sørensen is no Luddite, nor is he an strident idealist.

“He is not blaming anyone or saying we did anything wrong, but instead saying that we really need to consider our choices,” Goldman said. “He is saying we have to remember our humanity and not just consider the latest technological and flick innovation. That we have to remember how we connect to people and each other and the land.”

That plea is best articulated in “The Dream,” a poem about the simple beauty of working the earth. Read that poem, or listen to Goldman read it aloud, below.

The Dream
By Knud Sørensen
Translated by Michael Goldman

Over the winter you take care of your livestock.

In this way you live until you die. Everything else is just ripples
on the surface. Dairy consolidations factories revolutions sales percentages meat cattle versus milk cows all that is unreal. What is real is earth sun rain and the air
that is warmer in the summer than in the winter.

Danish author Knud Sørensen (b. 1928) was a certified land surveyor for 28 years, a time during which he became intimate with the Danish agricultural landscape. A book reviewer for 14 years, he has also written 48 books and won more than 20 literary awards, including a lifelong grant from the Danish Arts Council.

Michael Goldman (b.1966), founder of Hammer and Horn Productions, promotes and produces translated works of Danish literature. More than 100 of Goldman’s translations of poetry and prose have appeared in literary journals such as Rattle, Harvard Review, World Literature Today and International Poetry Review.

Left: A "For Sale" sign covers the gate to a cotton farm in Adrian, Georgia in October 2015. Credit: REUTERS/Brian Snyder.