Feminist poetry is having a renaissance. Here are 3 poets to watch

Decades after female poets of the ‘60s and ‘70s gained attention and acclaim, feminist poetry is having a moment again — particularly for women of color.

The latest wave began to form before the last election, according to poet and scholar Julie Enszer, who is editor and publisher of multicultural lesbian art and literary journal Sinister Wisdom. “Prior to the election of Donald Trump, periodically I would hear people say, ‘Do we still need feminist journals?’” Enszer said. “And the moment of the election of Trump was a resounding, ‘Yes, we do.’”

But the progression of feminist poetry has roots beyond politics of the day, Enszer says. She cites the longstanding work of groups like the African-American poetry organization Cave Canem, LGBT group Lambda Literary and Kundiman’s Asian-American literary programs as instrumental in championing minority voices.

“I think that, as a community, poetry has also invested in various systems of mentorship that have contributed to the flowering that we’re seeing at this particular moment,” she said.

Here are three women poets to watch in 2018, plus what they had to say about feminism, and which feminist poets they’re reading now. 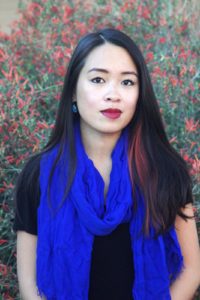 Susan Nguyen, poet and MFA student at Arizona State University, writes poetry that “carves out space” for her body and identity as an Asian-American woman. She says her work doesn’t deal with pleasant or pretty themes, and her inspiration for “All the Good Women are Gone” came from a deep dive into disparaging online forums about where all the “good women” are.

“What is a ‘good woman’? You know, I don’t even know that supposed to mean in the first place,” Nguyen said.

The past year since the 2016 election instilled a sense of urgency in Nguyen to explore her identity through poetry. She can’t predict the direction feminism is moving, but even watershed moments like #MeToo sometimes seem “far away” from the average woman’s experience.

Nguyen hopes that, moving forward, feminist movements start including more marginalized voices as a rule, not just an afterthought.

“I think it’s important to still be listening to women of color and just being very conscious of privilege and the different intersection of what it means call yourself a woman,” she said. “Not just gender but also especially race and class and ability.” 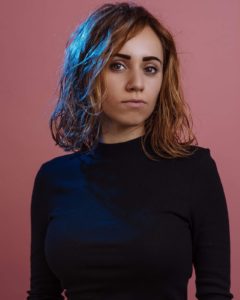 Nina Donovan wasn’t expecting to become an internet sensation with her poem “I am a nasty woman,” but when Ashley Judd read her work at the first Women’s March on Washington, she went viral. “Even now it’s still just feels so unreal,” she said.

The recitation at the march garnered millions of views, and Donovan now travels around the country performing and speaking at events. She says internet fame and life as a young poet in school is a balancing act. “I’m out here getting my heart broken. I got finals to worry about I got trolls on the internet, it’s crazy,” Donovan says.

But her new work is eclipsed by “I am a nasty woman,” a fact she thinks is indicative of feminism’s diversity flaws. One of her latest pieces, about Jennifer Lopez and connected to the crisis in Puerto Rico, didn’t gain as much traction. “People just want to hear ‘nasty woman,’” she said.

Donovan wants to see mainstream feminism moving forward as a “blended force,” but things need to change. “The biggest struggle at this point is getting the minority voices, not even just in an ethnic sense, but getting those queer voices out there especially those trans voices.” 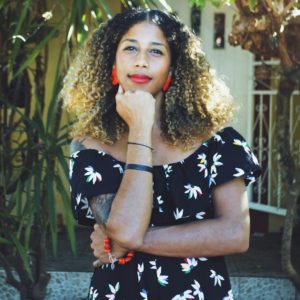 Aja Monet believes poetry is a liberating force, and words are essential tools for action. She never felt mainstream feminism represented her, especially as a young woman growing up in the public school system.

“My Mother was a Freedom Fighter” was inspired by the strong women who came before her who struggled for a better path in life. Her mother was one of them.

“I grew up with a mother who had to fight tooth and nail to keep a roof over her kids’ heads and put food on the table and clothes on our backs and make sure we had health care and make sure we had a decent education,” Monet said. “And if I know she’s fighting, you know, as a single mother of three kids, I can only imagine how many other women are fighting.”

Monet blames a lack of education for feminism’s diversity problems. Everything she learned about the movement growing up was rooted in the inclusion of minority communities, but she doesn’t think that is the case for many women. Pink cat ears and canned slogans aren’t enough for Monet.

Monet says people need to step up and, at times, step back to bolster marginalized voices. “We don’t live in the binary anymore, we’re in a new time,” she said. “Welcome to 2018.”