For Valentine’s Day, put down your phone and face your feelings with these poems

Modern love has become a dance of social media. We vet potential mates online before setting eyes on the real person, Instagram our romantic getaways, and eventually scroll the Facebook feeds of past lovers.

Technology “often gets in the way of us actually having to face our lives, to face what we’re feeling, to face our partners.”

We are more connected than ever, but poet Matthew Siegel finds it’s made communication more difficult. “We all have these major distractions of our technology,” he said. “And it often gets in the way of us actually having to face our lives, to face what we’re feeling, to face our partners.”

Research on phone use and relationship health reveals a grim outlook for plugged-in couples. One study on college-age adults found that individuals who rely heavily on their phones showed less satisfaction and increased uncertainty in their romantic relationships. 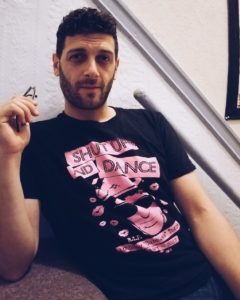 In another study, participants were asked to measure their daily “technoference”– interference of technology during interactions with their partners. Results found that the majority of participants in the study said devices infringe on personal time with significant others, which overall, led to “more conflict over technology use, lower relationship satisfaction, more depressive symptoms, and lower life satisfaction.”

Siegel explores how easy it is to become distracted by technology in two poems from his first collection: “[Sometimes I don’t know if I’m having a feeling]” and “[And sometimes I know I am having a feeling].” This distraction, he says, can make it difficult to work through complicated emotions. The poems were his way of figuring out how he was feeling during a particularly distressing moment in his life.

Siegel teaches writing and literature at the San Francisco Conservatory of Music and tells his students that writing is like an “emotional metal detector.”

“You’re sort of like sweeping the landscape looking for what it is that you’re actually feeling, because we live in a world that doesn’t really engender true and deep feelings,” he said.

At their essence, Siegel’s pieces are about the quest to “love well,” despite the distractions.

Siegel’s poems unpack how technology dependence — and constant comparison to idealized online personas — affects self-worth. “I think it’s just this feeling of displacement, of isolation,” he said, an effect of constantly seeing only the best versions of other people.

“You scroll through the feed [but] that’s not real life. It’s crazy because you have to hear it like 100 million times and you still don’t believe it,” Siegel said.

His poems pay tribute to how confusing it can be to really know how we feel about others and ourselves. The easy, neat answers that Siegel says we look for — through phone screens or out “the window/ with a serious look, like someone in a movie” — are just illusions.

At their essence, Siegel’s pieces are about the quest to “love well,” despite the distractions. Because beneath all those illusions, he said, “we have to be good to one another, and good to ourselves, because that’s all we have.”

Sometimes I don’t know if I’m having a feeling
so I check my phone or squint at the window
with a serious look, like someone in a movie
or a mother thinking about how time passes.
Sometimes I’m not sure how to feel so I think
about a lot of things until I get an allergy attack.
I take my antihistamine with beer, thank you very much,
sleep like a cut under a band aid, wake up
on the stairs having missed the entire party.
It was a real blast, I can tell, for all the vases
are broken, the flowers twisted into crowns
for the young, drunk, and beautiful. I put one on
and salute the moon, the lone face over me
shining through the grates on the front door window.
You have seen me like this before, such a strange
version of the person you thought you knew.
Guess what, I’m strange to us both. It’s like
I’m not even me sometimes. Who am I? A question
for the Lord only to decide as She looks over
my résumé. Everything is different sometimes.
Sometimes there is no hand on my shoulder
but my room, my apartment, my body are containers
and I am thusly contained. How easy to forget
the obvious. The walls, blankets, sunlight, your love.

[And sometimes I know I am having a feeling]

And sometimes I know I am having a feeling
but I don’t want to have a feeling so I close up
like a book or a jacket or a sack which holds
a body. Don’t mind me, I’ll just be dead in here,
you can drag me wherever you want, the body
seems to say. You laugh like a little silver moon.
You laugh like the moon on the water ignored
by necking lovers. You said you didn’t like that word
because something so sweet should not call to mind
giraffes, but I love the word “necking,” the way it twists
in on itself, like what I do to you when I want
to disappear in you, leave the sack of my body
strewn on the shore of you. Sometimes I’m inside
the sack and then sometimes I am nothing more
than the stitching which keeps it from bursting.
Sometimes I carry the sack and sometimes the sack
carries me. I only know the difference sometimes.
Do you ever feel like it’s difficult to figure out
what you’re feeling? I have that all the time, especially
when I look out a window or at your open face
across from me in bed, or your closed face
when I see the quiet pain you contain, or which
contains you. I know you’re more than that
frown which makes your face resemble a fist
with gorgeous black hair. I know you contain more
than the reaction to my words or my body.
Some of us have to learn to love with hands
interlocked, but each with our own hand.

Left: A couple takes a selfie with a mobile phone during a visit to the West Lake amid snowfall in Hangzhou, Zhejiang province, China. Photo by REUTERS/Stringer

Frederick Douglass statue ripped from base in Rochester park