‘What this year will be’

“I have always felt that part of my job in this world is to pay attention,” says poet Shelley Girdner. Her great-grandmother used to say that it was important to “find the one miracle in every day.” Girdner considers her work an extension of that family tradition. 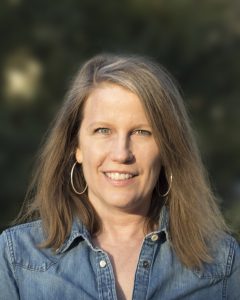 Shelley Girdner’s debut collection is titled “You Were That White Bird.” Photo by David Ramsay.

“You were that white bird,” a recently published collection, is filled with poems that capture the details in the natural world around her and the small miracles of her life. And miracles, she is quick to point out, aren’t always joyous.

“Sometimes miracles are terrible coincidences, weird alignments of things.” She said her poem “Shore” is about a walk she took years ago along the New Hampshire coastline where she lives. It begins:

Before God made the shore
he divined a woman walking there,
her sorrow a deep hurt she could not name.

“At the time I was struggling with depression. Depression in and of itself is so painful to live through. But if you can keep yourself moving through that difficult time, you reach a deep appreciation of coming back to a place of consolation.”

Similarly, she says her poem “New Years Day” was a very literal poem that came to her as she was running errands.

“It was the end of a very rough year. My husband had been ill for awhile and there were a lot of other negative things that had happened. It was an unusually warm day which caused some weird fog formations. And the poem just wrote itself as I was driving away from town, driving away from that terrible year with the idea of having a fresh start.”

Girdner says she loves it when poems just unfold that way, more an act of translation than crafting a piece of work. But she says more often she has to work hard to get the language just right. She has been writing little stories since she was a very young child, but didn’t become a poet until college. Finding the time to write between duties as a mother and professor of writing at the University of New Hampshire is always a challenge; each year she makes a New Year’s resolution to set aside time for writing as soon as she wakes up. That resolution only lasts a few weeks, she says with a laugh.

“I learn that I just have to be patient with the ebbs and flows of writing. It will always come if I’m patient.”

It’s warm after a cold night, and fog
rises into the air like all the badness
of that old year leaving, makes
licking white peaks of the roofs in town,
covers the fields with steeples.

When I drive home, the air won’t be the same;
the sense of fleeing upward will be gone,
so I drive through, one eye on the stream
of every sad thing farewelling.

I let my grief leave too, and what lies down after that
is like faith, a blank sheet, what this year will be.

Reprinted from “You Were That White Bird” published by Bauhan Publishing.

Shelley Girdner’s poems have been published in several journals including “Hunger Mountain” and “Painted Review.” She’s been a finalist for the Slapering Hol chapbook prize and nominated for a Pushcart Prize in poetry. She teaches at the University of New Hampshire.

Left: A man releases a paper lantern in front of fireworks ahead of the new year in China. Photo by REUTERS/Stringer