When asked about her work, poet Gwendolyn Brooks once said: “I wrote about what I saw and heard in the street … There was my material.”

What she saw and heard, as a black woman living on Chicago’s South Side in the mid-20th century, were the myriad struggles — and joys — of urban black life, which she explored in more than 20 books of poetry, a novella, autobiography and other works.

It has been 100 years since Brooks was born, and events are planned this year across Illinois and Chicago to celebrate the centenary. Though she died in 2000, she remains one of the 20th century’s most-read and honored poets, both for how deftly she put forward the issues of the day and for the grace of her craft and style. She was the first African American to receive the Pulitzer Prize, as well as the first to hold the role of poetry consultant to the Library of Congress, a position now known as Poet Laureate. In that role, and as a teacher, she worked to educate a generation of young black writers.

And yet, in 2017, some worry that Brooks is in danger of being set aside. “The Golden Shovel Anthology,” a new book of poems honoring Brooks, seeks to make sure that doesn’t happen. In the book’s foreword, poet Terrance Hayes writes: “I have been, since her passing, returning to her work again and again with the feeling not enough of it has been made of it or her … Perhaps we can never say enough.” 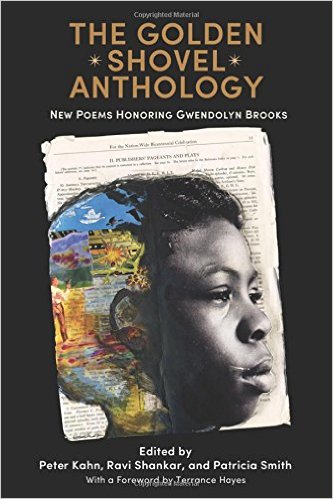 The Golden Shovel Anthology. Credit: The University of Arkansas Press

The poems of this anthology do not pay homage to Brooks in a traditional way. Instead, they seek to carry on her words through an entirely new literary form, called the “Golden Shovel.” In a Golden Shovel poem, a poet takes a line or lines from a Brooks poem, and then uses each word from those lines, in order, as the end words of their new poem. Hayes invented the form in his 2010 poem called “The Golden Shovel,” which used the lines of Brooks’ well-known poem “We Real Cool,” as the ending words in his.

More than 300 poets and writers try their hand at the form in this anthology, ranging from former U.S. Poet Laureates Rita Dove and Billy Collins, to writer-turned actor/comedian Langston Kerman — who stars in the HBO show “Insecure”– to a number of high school students. The “shovels,” as they’re called, take inspiration from dozens of Brooks’ poems, including “The Lovers of the Poor,” a social commentary about rich charity workers, and “The Anniad,” which was inspired by the epic poem the “Aeneid.”

Peter Kahn, who co-edited the anthology with poets Ravi Shankar and Patricia Smith, said the project began after he first read Hayes’ “Golden Shovel” poem and noticed the “odd enjambment” — where a sentence or phrase in a poem runs over from one line to the next.

“And then the lightbulb came on, and I said, ‘I see what he’s doing here,’” Kahn said. Not long after, he approached Hayes about the idea of asking other writers to play with his new form. Sure, Hayes told him, so long as it is in honor of Brooks.

Like Brooks, Kahn teaches in Chicago. He said he often asks his high school students to underline their favorite “striking line” in a novel, as a way of focusing their attention and getting them excited about the work. The Golden Shovel form, he said, seeks to do the same thing. “In a Brooks’ poem, the striking lines tend to be more often borrowed.” The Brooks poem “a song in the front yard” alone inspired 12 shovels in this anthology.

Among the most striking of the Golden Shovel poems was written by Patricia Smith, the anthology’s co-editor and a much-revered poet and spoken word performer. For her shovel, Smith chose to borrow lines from the Brooks poem “The Last Quatrain of the Ballad of Emmett Till” — Till being the 14-year-old black boy who was lynched in the 1950s for supposedly flirting with a white woman. A recent book revealed the most sensational parts of the testimony against Till were not true.

Brooks’ short and unnerving poem focuses not on Till, however, but on the grief of his mother, who famously decided to have an open casket funeral “so all the world can see what they did to my boy.”

Smith’s shovel poem, which is called “Black, Poured Directly into the Wound,” also focuses on the sorrow of Mamie Till. “Grief’s damnable tint / is everywhere,” Smith writes, and “The absence of a black / roomful of boy is measured, again, again.”

Kahn said as a teacher in Chicago, he thinks Smith’s poem “is unfortunately so relevant to what’s happening” in the city, where last year there were 4,368 shooting victims. That violence, which disproportionately affects the black community, continues to plague Chicago.

Another shovel in the anthology uses the same Brooks poem to write about the death of Chicago teenager Hadiya Pendleton, who in 2013 was mistakenly shot and killed by two gang members just after her final exams concluded. “Hadiya’s mother has someone else’s eyes,” the poem by Christian Campbell, a Caribbean poet, begins. It ends with “the room of eyes, in black and white, forever unsaying sorry.” 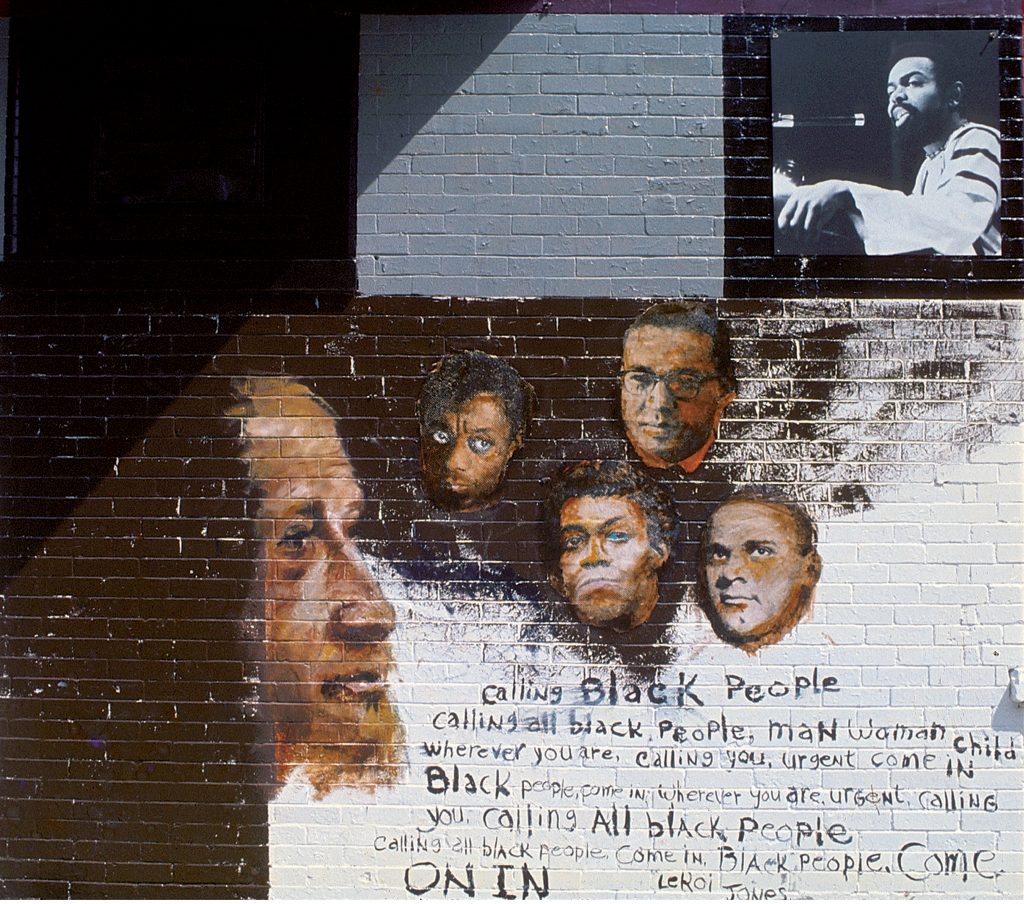 Black, Poured Directly into the Wound

Prairie winds blaze through her tumbled belly, and Emmett’s
red yesterdays refuse to rename her any kind of mother.
A pudge-cheeked otherwise, sugar whistler, her boy is
(through the fierce clenching mouth of her memory) a
grays and shadows child. Listen. Once she was pretty.
Windy hues goldened her skin. She was pert, brown-faced,
in every wide way the opposite of the raw, screeching thing
chaos has crafted. Now, threaded awkwardly, she tires of the
sorries, the Lawd have mercies. Grief’s damnable tint
is everywhere, darkening days she is no longer aware of.
She is gospel revolving, repeatedly emptied of light, pulled
and caressed, cooed upon by strangers, offered pork and taffy.
Boys in the street stare at her, then avert their eyes, as if she
killed them all, shipped every one into the grips of Delta. She sits,
her chair carefully balanced on hell’s edge, and pays for sanity in
kisses upon the conjured forehead of her son. Beginning with A,
she recites (angry, away, awful) the alphabet of a world gone red.
Coffee scorches her throat as church ladies drift about her room,
black garb sweating their hips, filling cups with tap water, drinking,
drinking in glimpses of her steep undoing. The absence of a black
roomful of boy is measured, again, again. In the clutches of coffee,
red-eyed, Mamie knows their well-meaning murmur. One says She
a mama, still. Once you have a chile, you always a mama. Kisses
in multitudes rain from their dusty Baptist mouths, drowning her.
Sit still, she thinks, til they remember how your boy was killed.
She remembers. Gush and implosion, crushed, slippery, not a boy.
Taffeta and hymnals all these women know, not a son lost and
pulled from the wretched and rumbling Tallahatchie. Mamie, she
of the hollowed womb, is nobody’s mama anymore. She is
tinted echo, barren. Everything about her makes the sound sorry.
The white man hands on her child, dangled eye, twanging chaos,
things that she leans on, the only doors that open to let her in.
Faced with days and days of no him, she lets Chicago—windy,
pretty in the ways of the North—console her with its boorish grays.
A hug, more mourners and platters of fat meat. Will she make it through?
Is this how the face slap of sorrow changes the shape of a
mother? All the boys she sees now are laughing, drenched in red.
Emmett, in dreams, sings I am gold. He tells how dry it is, the prairie.

After the Burial: A Stanza

Hadiya’s mother has someone else’s eyes. She
fades behind the black glass, she kisses
the wind. The dark room of her
eyes is always damp — there the kids killed
time — the shoes, the majorette uniform, the boy-
friend letters, the carpet, the bed, and
the blank dolls. The other mothers sit where she
sits, singing their silence of the way it is,
the room of eyes, in black and white, forever unsaying sorry.

Patricia Smith is the author of seven books of poetry, including “Shoulda Been Jimi Savannah,” winner of the Lenore Marshall Poetry Prize, and “Blood Dazzler,” a finalist for the National Book Award. A 2014 Guggenheim fellow, she is widely published and teaches for the City University of New York.

Christian Campbell is a Trinidadian-Bahamian poet, scholar and cultural critic. His acclaimed first book, “Running the Dusk” (Peepal Tree Press, 2010), won the Aldeburgh First Collection Prize and was a finalist for the Forward Prize for the Best First Collection, among other awards.