His wife worked at Sandy Hook. Now this poet is helping start a conversation about gun violence

If the shooter at Sandy Hook Elementary School five years ago had turned a different direction, then poet and writer Brian Clements’ wife Abbey, a teacher, might now be dead. She was spared; 26 people were killed.

“After that, a lot of other things happened, but it doesn’t really matter what,” writes Clements, of a day when so many lives were torn apart. That’s the last line of his poem in “Bullets into Bells: Poets and Citizens Respond to Gun Violence,” an anthology on gun violence in America published near the anniversary of the shooting.

“The day was devastating for the hometown and the concentric circles of impact, the people who were there that day and the families of children who died,” said Clements, who is one of three editors on the anthology and recruited several voices to write reflective essays in response to the works. The shooting “changed our lives that day, and we became activists.”

Twenty children and six adults were killed at the Sandy Hook Elementary School on Dec. 14, 2012, in Newtown, Connecticut. Earlier this month, the Connecticut Supreme Court heard an appeal by relatives of Sandy Hook victims, arguing that companies who sold weapons used by the gunman should be held responsible.

The anthology includes 54 poems about gun violence in the U.S., from poets including Jane Hirshfield, Natalie Diaz and Danez Smith, and at least six pieces that are original to the collection. Each work is followed by commentary and reaction from survivors, activists and writers, including a foreword by former congresswoman Gabrielle Giffords, who survived a gunshot wound to the head in 2011. 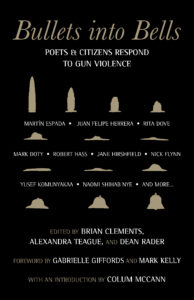 “I’ve always been in favor of varying degrees of gun control,” said Clements. “Sadly, it took the murder of 26 people in my hometown to light a fire under me and I think a lot of Americans find themselves in this position. We are quickly reaching a point where everyone in this country will be close to gun violence and it takes something like Sandy Hook or the Las Vegas shooting to make us pay attention to it.”

The anthology is a tool for a larger conversation on gun violence and empathy for survivors, Clements said. The editors of the anthology will also create public reading events in an effort to involve people in more direct action about gun violence. A book discussion will be held at the Boston Public Library on Dec. 13 featuring a selection of  contributors.

“From the outset we didn’t want this to be a literary project; we wanted this to be a project of the American community… a conversation amongst Americans,” Clements said.

One poem that especially stands out to Clements is Dana Levin’s “Instructions for Stopping,” a poem about domestic violence, which has been linked to several mass shootings in recent years. The response to the poem is written by Kate Ranta, a survivor of domestic violence. “One of the untold stories is how many women die at the hands of their partners,” Clements said.

Keep your lips pressed together

after you say the p:

three times in a row:

In a hospital bed

How should you apply

Put a period at the end.

Decide if it’s a kiss

“Instructions for Stopping” by Dana Levin, with a response from Kate Ranta, Domestic and Gun Violence Survivor and Cofounder of Women Against the Violence Epidemic. Excerpted from Bullets into Bells: Poets and Citizens Respond to Gun Violence  edited by Brian Clements, Alexandra Teague, and Dean Rader, with an introduction by Colum McCann (Beacon Press, 2017). Reprinted with Permission from Beacon Press.

Response to “Instructions for Stopping” from Kate Ranta, Domestic and Gun Violence Survivor, Cofounder of Women Against the Violence Epidemic

I was on the floor like a curled-up fish, yelling Stop Stop Stop. November 2, 2012, the date that changed my life and my family’s lives forever. My ex-husband appeared at my apartment door and shot my father and me. In front of my then-four-year-old son. The son I had with my ex-husband. His own son. My right hand exploded in front of my eyes. STOP! A bullet went through my left chest. STOP! A bullet was shot point blank into my father’s left side. STOP! I slid in my own blood and begged for my life. “Don’t do it, Daddy! Don’t shoot Mommy!” That’s what my son said, as I lay curled up. Make no mistake: Bullets hurt. Bullets kill. Domestic abusers with guns shoot bullets that hurt. That kill. I survived. My father survived. My son survived. The physical wounds healed. But the psychological scars are lifelong. Stop abusers. Now.