The first time I met Lawrence Ferlinghetti was unforgettable: It was early on the morning of Sept. 11, 2001, and Elizabeth Farnsworth and I were working on a story about him for the PBS NewsHour.

As surreal news trickled in of planes crashing in New York, Virginia and Pennsylvania, the crew and I continued to set up the lights and cameras while Ferlinghetti floated in and out of the room, offering stoic yet witty commentary.

Shortly after that morning, he composed “History of the Airplane,” a prose piece inspired by the attacks. Here’s an excerpt:

So, when KQED conceived of its Boomtown series, which seeks to put the Bay Area’s current boom-and-bust cycle in context, I thought who better to turn to than Lawrence Ferlinghetti, to reflect on the changes that gentrification and technology have made in his beloved city. 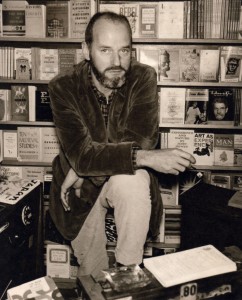 Lawrence Ferlinghetti, pictured in 1959, at the age of 40. Photo courtesy of City Lights Bookstore

Ever since the iconic poet, painter and publisher helped spark a literary renaissance in the 1950s with the “Beat” movement, Ferlinghetti has served as a conscience for San Franciscans, especially when times are tough.

When Ferlinghetti arrived in the city in 1951 from New York, he settled into a $65/month apartment in the Italian working-class neighborhood of North Beach. That was the beginning of his journey to put San Francisco on the world’s countercultural map by publishing the work of beat poets such as Allen Ginsberg and Jack Kerouac.

With $29/month rent for a massive art studio, “it seemed as ideal as any city could be for an artist or writer … a city small enough for human conviviality and large enough for intense creative ferment, with a metropolitan sensibility,” he wrote in a 2001 prose piece titled “The Poetic City That Was.”

But 64 years after arriving in San Francisco, despite his status as a literary legend, the 95-year-old co-owner of the renowned City Lights bookshop and publishing house says he doesn’t feel so at home in the city by the bay anymore. He complains of a “soulless group of people” too busy with their phones to “be here” in the moment.

“A new brand of dot.com millionaires and generally Silicon Valley money moved into San Francisco with bags full of cash and no manners and very little education in the great culture of Western civilization,” he told us when we went to visit him at his North Beach apartment last month. 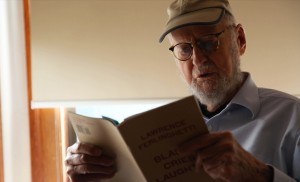 “In 1951 I had the feeling walking up Market Street … that the general attitude was that San Francisco really wasn’t part of the United States. They were sort of an offshore republic. … But that’s not the case anymore,” he told us.

“Now it’s like the rest of the country. Our city is like all the other cities. We’ve lost that feeling of being a unique place. I think the electronic revolution has caused that. So with the Internet it becomes flat earth. We’re living in the flat earth now.”

The George Krevsky Gallery in downtown San Francisco, which had shown Ferlinghetti’s work for two decades, was forced out of its building to make way for a cloud computing startup called MuleSoft.

Krevsky now sells most of his artwork online — out of his home in the Oakland Hills. Some of Ferlinghetti’s works can be seen at Live Worms, a gallery on upper Grant Avenue, one of the few parts of North Beach that still feels bohemian.

As part of its “Legends of the Bay Area” series, the Marin Museum of Contemporary Art in Novato is hosting a retrospective exhibition of Ferlinghetti’s art work through April 5.

Last Saturday, at an opening night reception, Ferlinghetti thanked the museum director for the exhibit and noted that it was “nicely hung.”

“I know that has a connotation,” he told the crowd, “and I’ll leave it at that.”

A day after our interview, Ferlinghetti left me a voicemail expressing concern that he struck too negative a tone and invited us back to his apartment for a second take. He wanted me and our audience to know that he still has hope.

“There’s always hope in love. Love and hate are viruses. Love can make a civilization bloom and hate can kill a civilization,” he told us when we returned. Then he read this poem:

“Recipe For Happiness Khaborovsk Or Anyplace”
One grand boulevard with trees
with one grand cafe in sun
with strong black coffee in very small cups.
One not necessarily very beautiful
man or woman who loves you.
One fine day.

Watch the broadcast report on Lawrence Ferlinghetti below:

A version of this column first appeared on KQED and is reprinted here with the author’s permission.