One poet’s advice for feeling at home in the unfamiliar

The pages of Jenny Xie’s first poetry collection will take you places. Bouncing from Vietnam to New York, reading “Eye Level” feels like leaning your head against a moving train window, watching the world outside with what Xie calls “renewed strangeness” as it flickers by.

Xie didn’t have a central theme guiding her writing during the years it took to complete “Eye Level,” but after a while she found that much of her work explored the act of observation. Like a film camera, Xie supplied the image, but readers are made to feel as though they are having a “direct encounter” with the subjects of her poems.

Fixtures: slick lips of suitcases, lukewarm showers up to three times a day.
Mosquito bites on the arms and thighs, patterned like pips on dice.

An hour before midnight, the corners of the sky begin to peel.
Alley of sex workers, tinny folk songs pushed through speakers.
Karaoke bars bracketed by vendors hawking salted crickets.

How do the eyes and ears keep pace?

Xie said that when traveling, she often felt as though she experienced things in a “heightened state” of sensation fueled by novelty and unfamiliarity. “Your brain is in many ways processing all the newness,” she said. “It’s remapping its internal landscapes because you’re in this new space.” 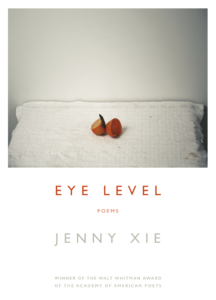 The three lines by Spanish poet Antonio Machado that begin the collection inspired Xie as she edited the book, thinking about how our observations shape who we are:

It is in our quiet observations, Xie said, that we can find ourselves when we’re on the move. Like any avid traveler could attest, finding a sensation of home among the unfamiliar is an enduring challenge, and repeatedly explored in “Eye Level.”

“The poems about travel, in some ways, are more about returning to the world with a kind of renewed strangeness,” Xie said. “But also … needing to find a home within when you are so uprooted.”

Any place, according to Xie, can feel like home as long as you can shed the mental barriers that keep you from connecting to the experiences around you.

Read one of Xie’s travel poems below.

The face of Chinatown returns its color,
plucked from July’s industrial steamer.

Four noodle shops on East Broadway release their belches collectively.
They breed in me a hankering for family life.

Here, there’s no logic to melons and spring onions exchanging hands.
No rhythm to men’s briefs clothes-pinned to the fire escape.

The woman in Apartment #18 on Bayard washes her feet in pot of boiled
water each evening before bedtime. But every handful of weeks she lapses.

I lean into the throat of summer.

Perched above these streets with whom I share verbs and adjectives.

Faces knotted, bangs softened with grease.
The East River pulls along a thread of sun.

While Sunday slides in. Again, in those plain trousers.

How the heat is driven off course.
How one can make out the clarified vowels of bridges.

Who’s keeping count of what’s given against what’s stolen?

There’s nothing I can’t trace back to my coarse immigrant blood.

Sweat seasons the body that labors.

And in each noodle shop, bowls dusted with salt. 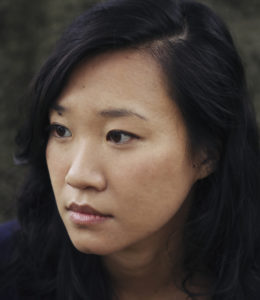 Jenny Xie is the author of EYE LEVEL (Graywolf Press, 2018), finalist for the National Book Award in Poetry, and recipient of the Walt Whitman Award of the Academy of American Poets and the Holmes National Poetry Prize from Princeton University. Her chapbook, NOWHERE TO ARRIVE (Northwestern University Press, 2017) received the Drinking Gourd Prize. Her work has appeared in Poetry, New York Times Magazine, New Republic, and Tin House, among other publications, and she has been supported by fellowships and grants from Kundiman, Civitella Ranieri Foundation, Bread Loaf Writers’ Conference, and Poets & Writers. She is on faculty at New York University and lives in New York.