Fatemeh Shams and Dick Davis have never met in person.

She is a young Iranian poet living in London, a voice of Iran’s post-revolution dissident. He is a medievalist translator and poet who lives more than 3,000 miles away in Ohio. Several years ago, after a friend showed Davis some of the poems that Shams had written, he emailed her, asking if he could translate her work from Farsi to English.

The result was “When They Broke Down the Door,” a collection in which Shams addresses the highly personal along with the struggles of post-revolution Iran.

Shams grew up in Mashhad in northeast Iran, in a conservative environment where she said she found it challenging, and sometimes frightening, to express her doubts about religion and explore her identity as a woman. “In that highly religious and conservative environment, both in school and society, as a young adult you feel suffocated and it feels only worse if you are a woman too,” she said.

But she was bolstered by a teacher who slipped her censored poems and novels which had been published before the 1979 revolution and were since banned by the government. Those brought her a glimpse of what she could express in writing. “At some point, I suppose I just couldn’t be scared enough not to write,” she said.

Many of Shams’ poems weave between the personal and the political, mixing self-reflection with contemporary political issues through traditional Persian poetry forms. Some of her poems also take on modern forms, especially those that address sociopolitical issues.

Davis said this unique combination of modern subject matter and traditional form drew him to her work. “She has contemporary subject matter, but a strong grounding in forms of Persian poetry that go back thousands of years,” he said. “That was one of the things that really fascinated me.”

Poetry in Iran has long played a role in communication between the ruling class and the public, both as a political tool and a tool of rebellion, Shams said. “[Poetry] has always has been a very important mediator between the public and the seat of power and also between the people themselves,” she said.

And the Persian language itself makes it possible for poets to address difficult or forbidden topics through the shaded language of metaphor, she said.

“For female poets in particular, both the language and metaphor give them the possibility of speaking about their experiences that are not necessarily approved or accepted by society, and the patriarchal structure in society,” she said.

In “Wager,” a sonnet, Shams speaks to the experience of being part of a political movement that has suffered a setback. It shows a “feeling of defeat, and at the same time a success. That is a very common feeling … that people are disillusioned after a political movement [but] have not given up on their cause,” she said.

The Wager
We were alive, but within ourselves we had died
We’d choked down the outlawed words we were forced to hide

We were alive, but silent, alone, and homesick,
Disheartened by the scars we’d endured side by side

We were shoulders, embraces, tears, and our cries, alone
In a strange town, suffering the wounds that we bore inside

And though horror and fear made their nest in our souls
We would not believe in our loss, defeat was denied

We stood and we died so that life would take hold, making
The wager, in this solitary grave where we’ve died. 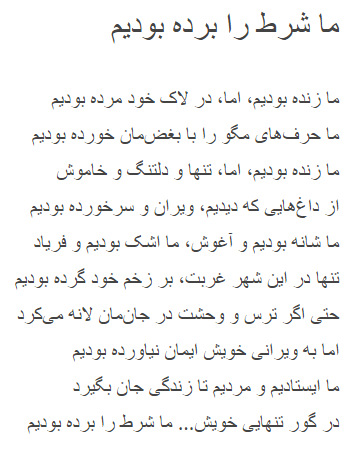 Fatemeh Shams was born in 1983 in Mashhad. Soon she began to write her first rhymed lines, around the age of 14. When she was only 17 she was the silver medal in the national olypiad of literature. She has published three selections so far. She holds a doctorate in the field of Oriental Studies from University of Oxford and currently works as a visiting teaching fellow at the School of Oriental and African Studies (SOAS) in London. In 2012, she won the award for the best young Persian poet.