Listen to Jericho Brown read “Labor” from his new collection, “The New Testament.”

I spent what light Saturday sent sweating
And learned to cuss cutting grass for women
Kind enough to say they couldn’t tell the damned
Difference between their mowed lawns
And their vacuumed carpets just before
Handing over a five-dollar bill rolled tighter
Than a joint and asking me in to change
A few lightbulbs. I called those women old
Because they wouldn’t move out of a chair
Without my help or walk without a hand
At the base of their backs. I called them
Old, and they must have been; they’re all dead
Now, dead and in the earth I once tended.
The loneliest people have the earth to love
And not one friend their own age — only
Mothers to baby them and big sisters to boss
Them around, women they want to please
And pray for the chance to say please to.
I don’t do that kind of work anymore. My job
Is to look at the childhood I hated and say
I once had something to do with my hands. 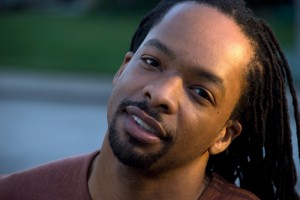 “The New Testament” is Jericho Brown‘s second book of poetry. His first book, “Please,” won the American Book Award in 2009. His poetry has appeared in The Nation, The New Republic, The New Yorker and Best American Poetry. Brown is a recipient of the Whiting Writers Award and fellowships from the National Endowment for the Arts, the Radcliffe Institute at Harvard University and the the Krakow Poetry Seminar in Poland. Before earning his Ph.D. in Creative Writing and Literature from the University of Houston, Brown worked as a speechwriter for the mayor of New Orleans. He is an assistant professor in the Creative Writing Program at Emory University.