Sarah Rose Nordgren reads “The Performance” from her debut collection, “Best Bones.” When she wrote the poem, she was thinking about self-inflicted violence and women. “One of the things I was thinking about in a number of the poems in the book was this sort of inward direction,” Nordgren told Art Beat in December. “This is a massive generalization, but this sort of inward-directed violence that seems to be more female as opposed to an outwardly-directed violence that’s more masculine. ‘The Performance’ is definitely about the self inflicted female violence.”

It’s not right that she should do this
to her body as she speaks,

but it’s the only way we can understand her.
We who weren’t raised on sand

and cherry-pits. Whose stepfathers
held their tempers.

The South is a mean place
we forget about. The windows

boarded up all over town. She says,
dogs chased her down the tar-

soaked road like devils. Each dog with three
heads, three tails. She says,

we might’ve mocked her story,
but never now. First, she strikes nails

against her chest like matches.
Then, when we think we can’t

take more from her, she eats
her own hands. Who are we now

to say that art should not destroy us? 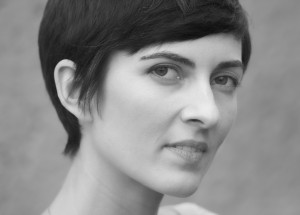 “Best Bones” is Sarah Rose Nordgren‘s debut book of poetry and is the winner of the 2013 Agnes Lunch Starrett Poetry Prize. Nordgren’s poems have also been published in a range of publications, including Plougshares, The Iowa Review, Pleiades, The Harvard Review, The Literary Review and the Best New Poets anthology. She has been the recipient of fellowships from the Fine Arts Work Center in Provincetown and residencies from the Virginia Center for the Creative Arts, scholarships from the Bread Loaf Writers Confernce and an Individual Excellence Award from the Ohio Arts Council. Nordgren earned a masters in fine arts from the University of North Carolina at Greensboro. She lives in Cincinnati and teaches in the English Department at Miami University of Ohio.

“The Performance” from “Best Bones,” by Sarah Rose Nordgren, © 2014. Used by permission of the University of Pittsburgh Press.