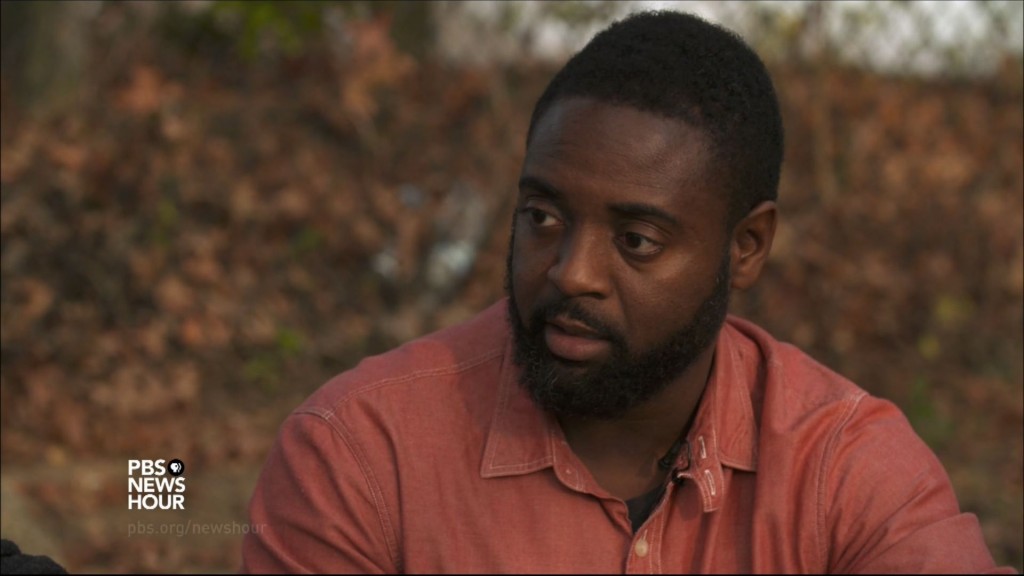 Reginald Dwayne Betts grew up an honor student with hopes for college, but went to prison at 16 for carjacking, his first run-in with the law. Reading, and poetry in particular, became a comfort and gave him a new identity. The writer, who is now a law student and a prison reform advocate, recently sat down with Jeffrey Brown to discuss his work and his journey.

JUDY WOODRUFF: Last night, we told the story of a writing program for juveniles in a Chicago detention center.

In part two of his report, Jeffrey Brown profiles a man who lost his way and then found it again, in prison, through poetry.

REGINALD DWAYNE BETTS, Poet: All our thoughts were beginnings. And you became the roundness that grew to a moon above your mother’s hips.

JEFFREY BROWN: We first met Reginald Dwayne Betts in Chicago at the Cook County Juvenile Temporary Detention Facility, where he’d come to read his poetry to young inmates and answer their questions.

REGINALD DWAYNE BETTS: If I never got caught, do I think — so you’re just going to put me on the spot like that?

JEFFREY BROWN: Does it take you back when you walk in a place like this?

REGINALD DWAYNE BETTS: Mostly no, because it’s really different walking in from the side I walk in now. And so the reason it takes me back is I recognize how different the experience is.

And then, when I see the kids, though, it takes me back, because all of them remind me of me when I was younger.

JEFFREY BROWN: Betts grew up 700 miles to the east in Suitland, Maryland, a community southeast of Washington, D.C.

REGINALD DWAYNE BETTS: This is my first time being back in a while, yes

JEFFREY BROWN: He was a bright child, an honor student who loved to read, and had hopes for college, despite being surrounded by drugs, occasional violence and peers who’d been locked up.

JEFFREY BROWN: That all changed on the evening of December 7, 1996, at this mall in Springfield, Virginia, when then 16-year-old Betts and a friend used a gun to rob a man and steal his car.

REGINALD DWAYNE BETTS: I recognized carjacking was wrong and it was crazy, but, in the spur of the moment, I just didn’t think about it at all.

JEFFREY BROWN: Betts was arrested the very next day. It was his first run-in with the law. He was transferred to adult court and later given a nine-year sentence.

So, you go to prison, you’re a teenager, and you’re among adults.

REGINALD DWAYNE BETTS: Yes. I couldn’t go and bring my mom water late at night if she wanted water. I didn’t have my own bed to sleep in. So that was part of being terrified, is just what it meant for now being an adult and to be on my own.

And then the other part of being terrified, I think, was just partly prison is a dangerous and scary place, and you never know what’s going to happen from, you know, one moment to the next.

JEFFREY BROWN: Reading became a comfort, and one day changed his life altogether when he was handed a copy of Dudley Randall’s “The Black Poets,” an anthology that would open his eyes to the possibilities of poetry.

What did it give you, being there in prison?

REGINALD DWAYNE BETTS: Well, the poetry gave me ability to access the world and communicate my ideas and my feelings about the world.

And, also, it was my idea of how to be somebody. Being a poet, for me, was being somebody. And it gave me something to pursue, and I could easily tell when I was doing it right by people’s response. And, also, I just really admire poets, Etheridge Knight, Sonia Sanchez, Robert Hayden, Amiri Baraka, Jack Gilbert, Agha Shahid Ali, just people who I found able to say something to me about a world that I didn’t know in verse, and I just aspired to be able to do that.

JEFFREY BROWN: After getting out of prison, Betts attended community college, taught middle school, and earned his undergraduate and master’s degrees. And he wrote, a memoir and two books of poetry. The latest is titled “Bastards of the Reagan Era.”

The poems, he says, speak of a generation of black men lost to drugs, violence and long prison terms.

REGINALD DWAYNE BETTS: So lost in terms of maybe not coming up with a father in the house, but, more significantly, lost in a way in which — almost as if the larger community has abandoned you.

“For the City That Nearly Broke Me.”

“No indictment follows Malik’s death, follows smoke running from a fired pistol. An old quarrel, crimson against concrete and the officer’s gun still smoking. Someone says the people need to stand up, that the system’s a glass house falling on only a few heads.”

And, in fact, I had more moments of just heartbreak, I think, and tragedy teaching than I did in prison. And so, in those poems, I think I’m fixating on the thing that causes me so much pain, not to the exclusion of everything else, but to the point that I really want to have to confront what it means to meet somebody that you really think is brilliant, and know that it might not pan out for them the way you want.

JEFFREY BROWN: Betts himself is now finishing law school at Yale University. And he’s also an advocate for prison reform, particularly for the treatment of juveniles.

REGINALD DWAYNE BETTS: The question is, do some people have to get locked up to get to that certain point where they can make themselves better in life?

JEFFREY BROWN: And serves on the White House Coordinating Council on Juvenile Justice and Delinquency Prevention.

When it came up when we were together in Chicago from some of the young inmates there, in a sense, was it better for you to go to prison? You started reading, you started writing. Everything that’s happened to you since came from that.

REGINALD DWAYNE BETTS: Yes, so I guess I tend to push back on that.

I was fortunate in a lot of ways. Like, I was safe in prison, and you can’t bank on being safe in prison. You know, you could say that prison was the catalyst for all that, and I think that that would be true, but there’s also an argument to be made that, for that to happen, a lot of things had to fall in place in a perfect way.

JEFFREY BROWN: And what is the plan now?

REGINALD DWAYNE BETTS: The plan now, to be a lawyer.

JEFFREY BROWN: To be a lawyer.

REGINALD DWAYNE BETTS: To be a lawyer.

I want to try to solve big problems. Somebody told me yesterday that you don’t go to Yale Law School to play it safe. And he said, despite the fact that you got three felonies, you’re playing with house money, and you need to make a decision about what you could do that’s actually ambitious and test the possibilities of the world. And can you think of ways to solve big problems?

JUDY WOODRUFF: The first part of Jeffrey Brown’s report looks at a writing program in one of the nation’s largest juvenile detention facilities. That’s on our Web site at PBS.org/NewsHour.