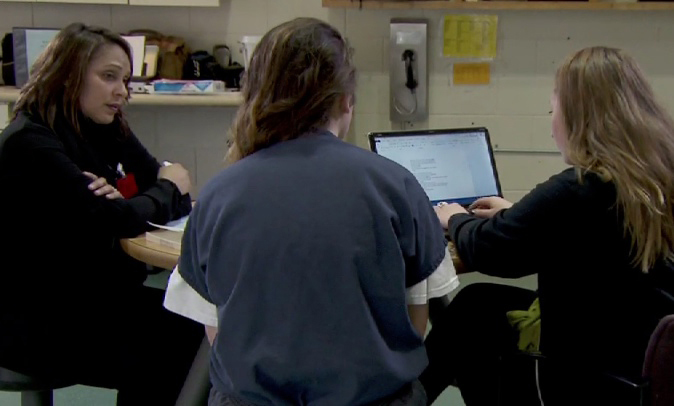 Visiting the King County Juvenile Detention Facility I couldn’t help thinking of the words of poet Robert Frost. He knew well the value of poetical metaphor when he wrote these lines:

In my own life I believe it was an early education in poetical metaphor that helped me to grapple with and make sense of all the difficult and traumatic things that were to come. That’s why it was heartening to see the kids in the facility writing poetry and making use of metaphor to grapple with the difficult knowledge brought on by their experience.

For Natasha Trethewey, the visit to the King County Juvenile Detention Center brought back vivid memories of visiting her brother in jail after he was convicted of a drug offense. Watch her read her poem “Benediction” about the day he was released from prison.

There are many ways that the young inmates were being educated, counseled about and disciplined for their behavior, and so participating in the poetry program was yet another way for them to not only continue their educations but also to have a kind of therapeutic experience that might help them to confront the things that have made their lives difficult and often traumatic. One girl told me that writing poetry was the only way she could articulate certain things — that the language of poetry enabled her to say the seemingly unsayable. 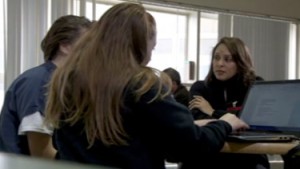 As I sat listening to her and the volunteer mentor discuss metaphor, I contemplated the words of another poet, Mark Doty. “Our metaphors go on ahead of us,” he wrote. That is to say, in one sense, our metaphors know more than we do, and that in writing them we can catch up to that knowledge. The girl I was sitting with was named after a kind of flower, and when her mentor asked her to describe what her difficult experience made her feel in metaphorical terms she gave an image of a plant left in a dark cave with no light or nutrients. And later, she likened another experience to having that plant — “No, a flower,” she said — crushed by a boulder. When I told her of Mark Doty’s words and asked her if she’d been thinking of the connection of her own name when making the metaphor, she answered that she had not — and then she beamed, knowing, I think, how her ability to arrive at that particular figurative language had already helped her to understand something about herself that she had not before recognized or spoken.

“Writing this poem I already feel a weight lifted off my chest,” she said, as if that boulder had been rolled aside and light had begun to filter into the darkness.

“Where Poetry Lives” is a special NewsHour series featuring reports on issues that matter to Americans through the framework of poetry. Funded by the Poetry Foundation and in partnership with the Library of Congress’ Poetry and Literature Center, the reports present U.S. Poet Laureate Natasha Trethewey and NewsHour’s Jeffrey Brown as they explore poetry and literature in various corners of American life.

Previously, the duo visited the Alzheimer’s poetry project in Brooklyn, where people with the disease use poetry to try and trigger memory. They also explored InsideOut, a program in Detroit that turns their students into published poets with a little guidance from professional writers, and Harvard Medical School, where Rafael Campo teaches poetry to medical students to help them better connect with their patients.