Poet’s Notebook: Beginning the Journey by Remembering the Past 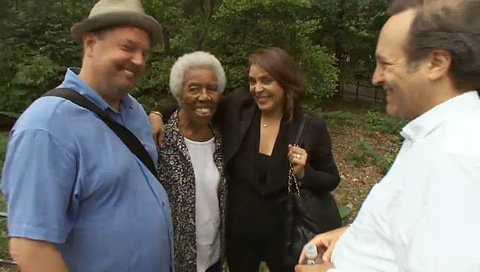 Editor’s Note: PBS NewsHour kicks off a special poetry series with U.S. Poet Laureate Natasha Trethewey. “Where Poetry Lives” features Trethewey and NewsHour’s Jeffrey Brown. The pair will be on-location, reporting on issues that matter to Americans through the framework of poetry. This series starts Sept. 12

Often as a poet I find that I am somewhat outside an experience I want to hold onto, consciously taking mental notes or writing them down in my journal — for fear that I will forget. It’s not unlike being on a trip and taking pictures, your face behind a camera the whole time — the entire experience mediated by a lens. But a few weeks ago at the New York Memory Center shooting a segment for the NewsHour’s Poetry Series, instead of holding a camera or a pen, I was holding the hands of children as we walked toward the room where we’d meet adults living with memory loss. Or I was holding the hands of the adults with memory loss as we met and greeted each other, and then again as we said goodbye. It was the kind of being present in which you are immediately able to recall all of the names of the people you encounter, a kind of fellowship rooted in a profound human interaction — all of it that day facilitated by poetry.

While I was there I did not think, “I want to remember this,” and yet perhaps I was in a heightened state of recalling so much because I was aware that some of them would not. Some had the kind of memory loss that meant they could recall their childhoods, their distant pasts, former lives with deceased husbands or wives, but not what had happened the day or even moments before. Memory loss takes many forms. But I could hear in their repetitions — phrases uttered again and again — the anaphora of poetry, one of the techniques a poet might use along with cadence and rhyme to make the language memorable. 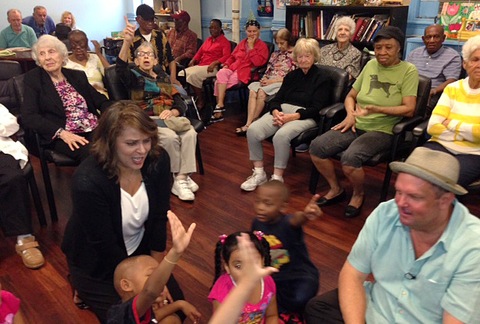 I could see in some of them the stages my great-aunt Sugar had gone through during the 10 years that she lived with Alzheimer’s disease. Before she was too ill to continue to speak she began to talk only in the cadences of the psalms we’d recited in church — some of the first poems I ever learned. She had taught them to me along with the rest of the children in my Sunday school group — recitations to present to the adults during special programs. At the Memory Center, working first with the children and poet Gary Glazner, practicing to recite the poems for the adults with memory loss, I was reminded of my own childhood.

The children in the Memory Center seemed delighted, as children often are, simply to speak the lines of the poems we used. And so did many of the adults who were able still to speak. A woman named Evadene called the children’s exuberance a lovely “stage of life.” I imagine that so many of us have had such experiences as children: from nursery rhymes we learn at home or in school, to sacred poems of religious ceremony, our grasp of language has a beginning in poetry. To see it used at a very different stage of life, and to such effect, was deeply moving.

My own journey in becoming a poet began with memory — with the need to record and hold on to what was being lost. One of my earliest poems, “Give and Take,” was about my Aunt Sugar, how I was losing her to _her_ memory loss. It seems fitting then that we began the journey to highlight the way poetry matters in the lives of countless Americans at the memory center, with people nearer to the end of their lives for whom memory is ever more essential.

Natasha Trethewey is the U.S. Poet Laureate. She will blogging for the PBS NewsHour during her travels on the “Where Poetry Lives” series