This year, because of the 50th anniversary of Freedom Summer, Congressman John Lewis led the 14th Congressional Civil Rights Pilgrimage not only to its annual destination in Selma to remember the events of Bloody Sunday, but also to my native state, Mississippi. As many times as I have traveled through Mississippi, making my own pilgrimages in order to write about the place that made me, I had never been to Money, the town where Roy Bryant and J. W. Milam (who would later publicly describe their crime), abducted and murdered 14-year-old Emmett Till for allegedly whistling at Byrant’s wife Carolyn at their grocery store. 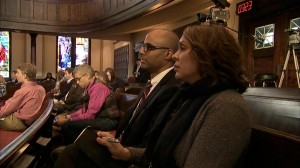 As the buses pulled into town, someone pointed out Bryant Grocery, or what was left of it — three walls of the brick exterior overtaken by weeds. It stands now as a ruin, a marker inscribing on the landscape the traces of just one of the episodes of violence and injustice in our shared American past. Looking out the bus window, I thought of Hegel’s words: When we turn to survey the past the first thing we see is nothing but ruins. But here was a literal ruin, the imagery of it possessing the power to compel us to remember and to engage in our own private reckoning. 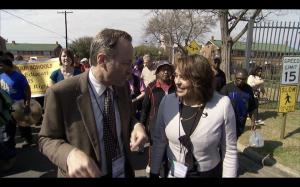 U.S. Poet Laureate Natasha Trethewey and the NewsHour’s Jeffrey Brown retrace moments from the Civil Rights era, including the march from Selma to Montgomery.

Our sojourn in Money, MS culminated in a program of remembrance at the church down the street from the grocery. First, a cousin of Emmett Till’s who had been with him recounted the events of that day in 1955. His pain was visceral, as if he were reliving it. After he spoke we heard from Lonnie Bunch, the director of the Smithsonian’s new National Museum of African American History and Culture. He described the decision to show Emmett Till’s casket in the museum, a decision not unlike Mamie Till Mobley’s to bury her son’s mutilated body in a glass-top casket for, as she said then, “the world to see.” Even now I can barely look at the photographs of his battered-beyond-recognition face. Still, I cleave to it for the necessary remembering of difficult knowledge that allows us not only to contend with the past, but also to grapple with our contemporary moment — how far we’ve come, how much farther we have to go. The language of poetry, its imagery and musicality — sound and sense — helps us do this too.

And so what came to me as I sat listening in the church were the words of poets. I thought first of Cornelius Eady’s remarkable poem “Emmett Till’s Glass-Top Casket.”

By the time they cracked me open again, topside, abandoned in a toolshed, I
had become another kind of nest. Not many people connect possums with Chicago,

but this is where the city ends, after all, and I float still, after the footfalls fade
and the roots bloom around us. The fact was, everything that
worked for my young man

worked for my new tenants. The fact was, he had been gone for years. They
lifted him from my embrace, and I was empty, ready. That’s how the possums
found me, friend,

dry-docked, a tattered mercy hull. Once I held a boy who didn’t look like a boy.
When they finally remembered, they peeked through my clear top. Then their wild
surprise.

Eady’s poem reminds us not only of the horror of “a boy who didn’t look like a boy,” but also the dangers of forgetting. It is also a powerful assertion of the role of poetry in the remembrance of and reckoning with our history.

The words of the Romantic poet Percy Bysshe Shelley remind us that poetry is one of the best ways to contend with such difficult knowledge, how the elegant language of a poem can transform experience: Poetry is a mirror which makes beautiful that which is distorted.

On the Pilgrimage, I was reminded that a lack of awareness of the past, forgetting, and willed amnesia are easy. The necessary work of remembering is harder. Poetry gives us a way to look at our past unflinchingly, to see it clearly. It is also transformative as it gives us a way to imagine our future, the just and humane society we continue to build—our more perfect union.

Watch chief arts correspondent Jeffrey Brown’s broadcast report on the annual Congressional Civil rights Pilgrimage on Friday’s broadcast of the PBS NewsHour. You can tune in to our Ustream Channel at 6 p.m. EDT or check your local PBS listings.

“Where Poetry Lives” is a special NewsHour series featuring reports on issues that matter to Americans through the framework of poetry. Funded by the Poetry FoundationLibrary of Congress’ Poetry and Literature Center, the reports present U.S. Poet Laureate Natasha Trethewey and NewsHour’s Jeffrey Brown as they explore poetry and literature in various corners of American life.

The videos were shot by Spencer Cooper and Ryan Aubrey and edited by Victoria Fleischer. Frank Carlson contributed to this report.