Prolific poet and biographer Tom Clark died this month at the age of 77, leaving behind a substantial body of writing that exemplifies his penchants for lyricism, wit, and brevity, as well as a lifelong love of baseball. 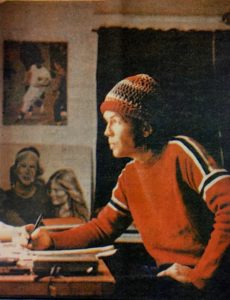 Clark was struck by a car in his hometown of Berkeley, California, on the evening of Friday, Aug. 17 while walking outside of the crosswalk at an intersection. He was transported to a hospital alive, but died of his injuries the next morning.

“Stunned and shocked” by the news, The Allen Ginsberg Project wrote that he was “singularly adept, seemingly effortless, absolutely exemplary, lyric poet, author of numerous volumes (too many to mention here).”

Clark — born in Oak Park, Illinois, in 1941 — first fostered a passion for poetry at the University of Michigan, where he became a favorite student of the late former poet laureate Donald Hall (who himself died at the age of 89 in June).

After Clark graduated in 1963, he was hired as the poetry editor for the Paris Review with a recommendation from Hall, who had once held the job and would later say in this year’s American Poetry Review that “Tom Clark was the best student [he] ever had.”

Poems from Clark’s two dozen collections span a range of moods and styles that shifted with his age, but are consistent in their lyricism and emotion. His said his work was influenced by the likes of Ezra Pound and William Carlos Williams, leaders of the “Imagist” poetry movement, a 20th century rebellion against Victorian and romantic styles.

Like the poets he admired, Clark’s well-formed sketches from everyday life exude simplicity and clarity. In “Fig. 1” he writes:

Clark’s love of baseball seeped into his work, reflecting an almost religious reverence for the sport. He was an usher at Wrigley Field while growing up in Chicago, wrote volumes on the sport and the history of his favorite team, the Oakland A’s, and co-authored a book with Detroit Tigers star pitcher Mark Fidrych.

“The best poems and the best baseball games share a dramatic tension you can’t find in very many other places.”

“I think they have a natural relationship,” he said of poetry and sports. “The best poems and the best baseball games share a dramatic tension you can’t find in very many other places.”

While earning his master’s degree in 1965 from Cambridge University, Clark ran into Beat poet Allen Ginsberg at a Bristol pub, a chance encounter that spurred the two men to hitchhike together to London.

Other Beat personalities would inspire Clark, whose prose work includes acclaimed biographies of Jack Kerouac and Charles Olson, as well as literary criticism in the San Francisco Chronicle and Los Angeles Times.

Clark settled in Northern California with his wife, Angelica Heinegg, and taught poetics at New College of California in San Francisco from 1987 to 2008. He wrote regularly on a personal blog, Beyond the Pale, even hours up until his death.

In one piece from a 2013 blog post called “The Edge of the Forest,” he wrote of the “memories” of poems, heard whispering from the edges of the natural world he alluded to so often in his work. When the city falls quiet, one hears “the voices of poems beneath the old trees/ talking quietly about the poems that were/ once here but are not here any longer/ remembering each other.”

Read a selection from Clark’s “Light and Shade: New and Selected Poems” below:

Baseball and Classicism
BY TOM CLARK

The day she went 5 for 5 against Vic Raschi

“Baseball and Classicism” is used by permission from Light and Shade (Coffee House Press, 2006). Copyright © 2006 by Tom Clark.