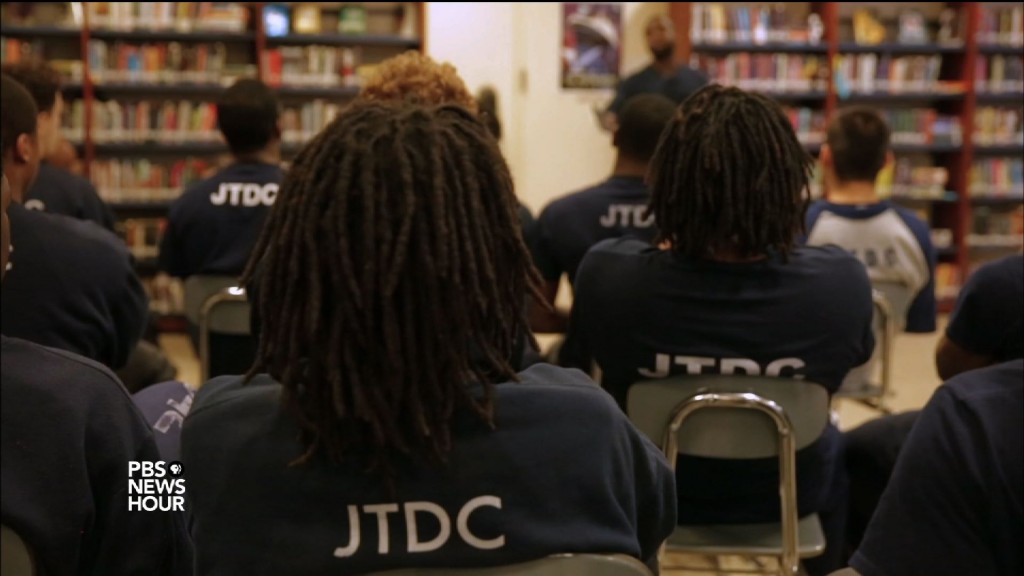 Free Write Jail Arts and Literacy aims to help troubled youths in Chicago’s Cook County Juvenile Temporary Detention Center address their personal issues by writing poetry about their circumstances and upbringing. Jeffrey Brown talks with poet Reginald Dwayne Betts, who turned around his life with writing and education after eight and a half years in prison.

JUDY WOODRUFF: Finally tonight, a look at a writing program inside one of the nation’s largest juvenile detention facilities.

Jeffrey Brown has that story.

REGINALD DWAYNE BETTS, Poet: You know the truth of the quarrels and how history lets the blame go blameless for the blood that flows black in the streets.

REGINALD DWAYNE BETTS: That’s part of what I meant by history, that it’s this bigger thing that we have to understand to even understand our own lives.

JEFFREY BROWN: When you come to a place like this, what are you hoping to get out of it?

REGINALD DWAYNE BETTS: I think, honestly, I’m trying to get them to pay attention to their own stories. So I will read a poem to them, I will talk to them, and if I get them to think about their own stories, they get to write their stories down and kind of think in a different way about how their stories shape the life that they have. And if you want a different life, you find a way to tell different stories.

JEFFREY BROWN: Betts should know. As a teenager, he was arrested for carjacking, tried as an adult, and spent eight-and-a-half years in prison.

JEFFREY BROWN: While still in prison, Betts read intensively, began writing poetry and completed high school. And since getting out in 2005, he’s graduated from college, earned his master’s, written a memoir and two books of poetry, and at age 35 is now a third-year student at Yale Law School.

REGINALD DWAYNE BETTS: What I want to do today is to sort of let them know that I believe what doesn’t look and what doesn’t seem to be possible right now, but I believe is possible for them, because it is implausible, but, hey, implausible happens all the time.

JEFFREY BROWN: This is one of the nation’s largest juvenile detention centers, on the day we visited housing over 300 young people aged 10 to 16 who are awaiting trial. As a condition to film this story, we were required to conceal their identities.

It’s also home to a fully functioning public school, so students don’t fall behind on classwork while here.

REGINALD DWAYNE BETTS: I want you to talk in your voice.

READ MORE: Stuck behind bars, a writer found a way to connect to the world

A native of Trinidad, Roger Bonair-Agard is a poet and teacher who encourages his students to find their voices using the familiar language and places around them.

ROGER BONAIR-AGARD, The Poetry Foundation: As you might imagine, the young people here have had who they are, and how they talk, and where they live devalued for a very long time.

And so the idea that those voices and those places should be brought to something that could eventually be this is really important.

JEFFREY BROWN: A student we spoke with read one of her new poems.

STUDENT: So I ask, why you looking at me like that? Speak. Tell me you understand I’m more than what you see. So, take that chance and get to know me.

That’s all I have.

JEFFREY BROWN: Do you feel like that’s going on a lot?

STUDENT: Yes, not just me and, like, others. I found myself other people — that’s a common thing people do. Me personally, as a youth, an African-American, I get judged. I’m already — I’m detained right now, so I get will judged back because of that.

JEFFREY BROWN: Ryan Keesling is the director of Free Write.

And we just allow those issues to sort of come to the surface, and assemble pieces of art that represent their processing of those experiences.

STUDENT: So, let me grab the broken pieces, and use my thoughts as glue, put it all back together, so I can at least have a clue. Why blame myself, when I can look back at my roots, and see myself as a young boy, watching and picking up what my father used to do?

One day he said, son, come here. Let me show you how this works. He handed me a handful of crack and put a .22 on my waistline, which was hidden behind my shirt. He said, there’s money to be made, and you will find out what it’s worth, setting me up to die early, which say he ain’t care about my birth.

JEFFREY BROWN: In a place like this, does writing get you respect? It is something you — that everybody knows you do, or…

STUDENT: It’s definitely something everybody know I do.

To me, like, they look at it as like it’s a positive thing. And I love — I love getting praise for positive things, because I didn’t do a lot of positive stuff when I was out. So doing something positive and getting a different reaction, it’s like, OK, I ain’t never felt this before.

So, I mean, why not keep going with this, you know?

In 2007, the federal government took over, and through a transitional administration, the population dropped from more than 800 residents to today’s 300.

Last year, control was handed over to Cook County’s office of the chief judge, Timothy Evans, who wants to maintain that momentum.

TIMOTHY EVANS, Cook County Chief Judge: I think that we are changing, and we have to find a way to keep these people who’ve gone through the system from returning to the system.

They have to be trained how to get a job and keep a job. They have to develop skills. They can’t just be let out with $40 in their pocket and expect, oh, they’re going to be fine.

JEFFREY BROWN: In charge of the day-to-day is superintendent Leonard Dixon, who has run juvenile institutions across the country, most recently in Detroit, and is known as a reformer.

LEONARD DIXON: I believe in jails. I don’t have a problem with that. My issue is, what do you do with people when you get them in there, and what kind of services are you providing, so that you can get them back out in society, so they can do well?

LEONARD DIXON: There’s no question about it; 96 percent of the kids in here are kids of color. And that’s a question that we need to be asking, why is it that way?

Is it a community? Is it the courts? It’s — all of it comes together. It’s the police department. I mean, it’s everything. Everybody has to come together to figure out why.

The Illinois state legislature took one step in that direction last year, passing a bill that aims to reduce the number of minors automatically tried as adults, except for the most violent crimes. It’s one drop in a wave of penal reform now being discussed across the country that Reginald Dwayne Betts and others have been advocating.

REGINALD DWAYNE BETTS: I do think that a lot of organizations around the country, and they’re pushing to limit confinement to when it’s — only when it’s necessary. And they’re pushing to sort of find different ways within a community to treat young folks that have gotten in trouble. I think what we’re still working on now is to have better outcomes.

While behind us, cell doors keep clanking closed, and Malik’s casket door clanks closed, and the bodies that roll off the block and into the prisons and into the ground keep rolling, and no one will admit that this is the way America strangles itself.

JUDY WOODRUFF: Be sure to tune in tomorrow night, when Jeff talks with Reginald Dwayne Betts about his upbringing, his time in prison, and how he found poetry.

On our Web site now, you can watch Betts read one of his new works titled “For the City That Nearly Broke Me.” That’s PBS.org/NewsHour.