This new poetry anthology honors the scope of native writers

In “New Poets of Native Nations,” readers will not find exoticised verse on “treaties, battles and drums,” editor Heid E. Erdrich assures in her introduction to the 2018 anthology.

There is instead “grass and apologies, bones and joy, marching bands and genocide, skin and social work” and much more in the work of the 21 native writers featured in the collection — an answer to what Erdrich and others believe is the systemic misrepresentation of a diverse community.

“We do and we do not write about eagles, spirits and canyons. Native poetry may be those things, but not only those things.”

Laura Da’, a poet and teacher featured in the collection, sees tremendous success in the vast array of work, and is tired of the mainstream fetishization of native literature, an issue she attributes to underrepresentation and non-natives writers claiming to write native narratives.

“It reinforces other-ness, and I think the subtext of it is, it’s not competing with what’s considered to be the true literary landscape,” Da’ said.

This was a core goal for Erdrich’s anthology: tackling the idea that art by native creators can stand on its own in the mainstream, and not be categorized only as ethnic or cultural artifacts.

“Unless our poetry conforms to some stereotypical notion of Native American history and culture in the past tense…it goes unrecognized,” writes Erdrich. “We do and we do not write about eagles, spirits and canyons. Native poetry may be those things, but not only those things.”

In “Passive Voice,” Da’ recounts a sixth-grade grammar lesson on detecting the use of passive voice by inserting “by zombies” after each verb. The poem was inspired by her research into the use of language when describing mass atrocities and “how often they’re are marked by passive voice where nobody is held accountable, even through the grammar of how these events are memorialized,” she said.

I wonder if these
Sixth graders will recollect,
On summer vacation,
As they stretch their legs
On the way home
From Yellowstone or Yosemite
And the byway’s historical marker
Beckons them to the
Site of an Indian village–

Where trouble is brewing.
Where, after further hostilities, the army was directed to enter.
Where the village was razed after the skirmish occured.
Where most were women and children.

Poet Tommy Pico — another author in the anthology — is inspired by the Bird Songs of the Kumeyaay nation, from which he hails. Pico describes Bird Songs as travelogues, song cycles that can last for hours that tell the stories of the Kumeyaay finding their way to ancestral lands. 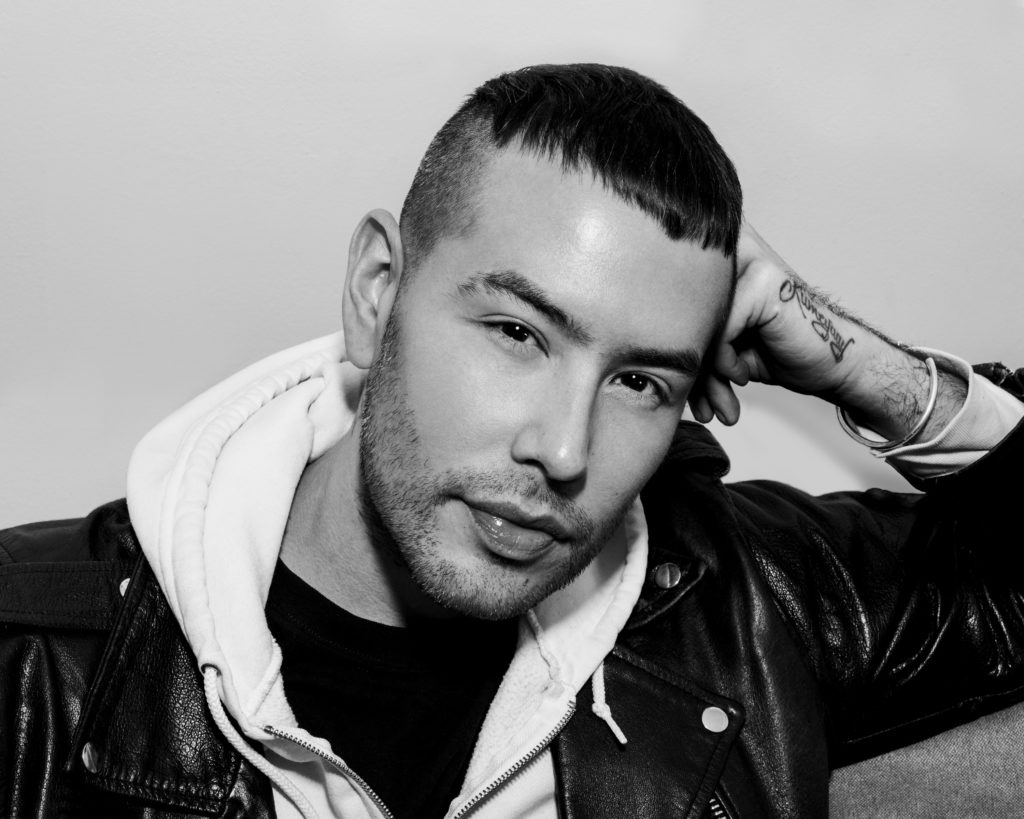 His own epic poems are a take on that tradition. He writes of migration away from ancestral lands near Baja California and San Diego County and the “trials and tribulations” of settling in Brooklyn — reflections on being close to his culture, yet so far away.

“They were like echoes or whispers, and in my attempt to hear them, as if I were a satellite, what I picked up on was poetry,” Pico said.

He said his poems are the first Bird Songs to be written in hundreds of years, a practice lost to compulsory — and often deadly — Indian re-education. The United States government began sending indigenous children to federal boarding schools in the 1870s, a practice meant to strip them of their native identities and force them to assimilate to the white, American way of life. Children were routinely punished severely for expressing their native culture, and many of the schools were susceptible to disease.

The repercussions of these abusive “re-educations” are still felt by contemporary generations, Pico’s included.

“It was it was a cultural genocide as well as an actual genocide,” Pico said. “My response to that is to continually create new culture, because the more stuff I make, the more Kumeyaay culture exists in the world.”

“They were like echoes or whispers, and in my attempt to hear them, as if I were a satellite, what I picked up on was poetry.”

But while Pico appreciates the spotlight, there is danger in the mainstream moving on to “the next ethnicity du jour.” He sees a challenge in keeping up the momentum of increased representation of indigenous work, and cautions against audiences glancing over work like this as a fad, only to discard it and move on.

Pico writes book-long poems to combat those fleeting attention spans, pushing people to commit to his work. “If you want to get this, you have to read the whole thing,” he said.

Yet the release of anthologies like this one heralds an exciting time for Pico and others: an increasing resonance for native writers telling their own stories.

Read an excerpt from Pico’s “IRL” included in “New Poets of Native Nations” below:

From IRL
BY TOMMY PICO

Is this ad relevant to you?
We would like to enhance
your ad watching ex-
perience. Yr a garbage
person if you can’t
take a good photo,
is the underlying mess-
age of “gay” “culture”
in Brooklyn The concept
of fame in the United
States I hate
having my picture taken,
I say to this photog-
rapher at this party
bc every damn party
has to b photographed
otherwise it doesn’t happen
And bc the parties
are so boring, if ppl
weren’t posing
there would b nothing
to do but drink. It’s
too loud for convos
n they don’t let you dance
in the city. He says oh
come on. I say calm1Y
No. n he asks is this
an Indian thing? Like
does a pic steal yr soul
or something?

I want to crumple
him up in the palm
of my hand But I
guess it is a NDN
thing in the sense that
I’m NDN n doing
this thing. Posin for pics
is like not being able
to stare into the sun
for too long but kind of the
opposite—blank black lens
crystallizes the uncertainty
within.
Is this good, or bad
is a sentence in a fight
n I hate confrontation.
Why do I have to take
sides? Switzerland has
the strictest privacy laws
on the planet, and I
have the flyest tank
tops in America. Some-
how I feel good about it.
In Kumeyaay
there’s a concept for in-
between. Not knowing
how to smile, how you look
bent over a book Waking
up on either coast
feels the exact same
Sometimes you wake up
not knowing how old
you are n if Johnny
is down the hall in
a robe makin eggs. Future
leaders are wooshed away
from the tribe in a sort of
boreal way to feel
the greater world, stone
hills etc (this is back
in the day).
This in-between
is like gangbusters
for Muse. It’s like cat-
nip to Muse It’s throb
of light in-between
the 2 of us Just the 2
of us, you n I. I rub Muse
my neck I’m clenching
my jaw for like 20 mins
waiting for this damn
photog to take damn
pic. In-between
Kumeyaay and Brooklyn—
that it has a word,
even if the word is lost
even if the word doesn’t exist
even if I’m lyin to you,
is breath tethering Opens throb
of light inside me. I
don’t have the option
of keeping my God
alive by keeping her name
secret b/c the word for her
is gone Keeping secrets
is not possible So I give
everything away I’m out
here all alone trying to wad
up enough obsessions
to replace her and with
it, my God I never got to
know her But strangely
sometimes when I’m cry-
laughing at that scene
in Steel Magnolias or
I can’t sing the part in
that Beyoncé song at
karaoke where the music
gets all soft and I try
to croon ooh baby, kiss me—
Maud has to take
the mic bc the feeling gets
bigger than my voice n
the feeling I think it’s her My God
‘s shadow walking down a hall-
way away but like I said I lost
my voice n don’t know
her name Maybe it’s
Wa’ashi or Pemu,
says this clairaudient
to me apropos of nothing
But I’ll never know 4
sure So I can’t call after her
n then I’m like, crying
at a Beyoncé song
r u kidding me Teebs get
it together bitch My dad grows
his hair long Black waves
cascade down his back b/c knives
crop the ceremony of his
mother’s hair at the NDN boarding
school I cut mine in mourning
for the old life but I grow
my poems long. A dark
reminder on white pages.
A new ceremony. I grab
the mic back from
Maud Flip for a new song to
98 flash across the karaoke
screen Fist breath low
n ready James
is finally following me
back on Insta so I take a
somewhat risque
selfie send it DM
n right after message
OOOPS! omg I
meant to send that
to someone else gosh
so embarrassed oops!
He responds w/
a pic of his computer
screen His phone #
on it so we
text n he’s like
come over n I’m like
do u have A/C he says
Yes n I just straight up
drop the mic
n Leave.

from “IRL,” by Tommy Pico; originally published by Birds, LLC

Tommy Pico is a writer and karaoke enthusiast. Originally from the Viejas Indian reservation of the Kumeyaay nation, he currently lives in Brooklyn.