Jimmy Santiago Baca wrote the collection, “Winter Poems Along the Rio Grande” in 2004 after living on the banks of that river. Every morning, he ran through snow, rain and mud in a ritual that he called a spiritual experience.

From this collection comes the poem, “It would be neat if with the New Year…,” which pays homage to life’s roads, especially the rough ones. It alludes to Baca’s own difficult past, and the desire to hang on to life’s tougher experiences.

Formerly incarcerated as a young man in his 20s, poetry was a way of remaking his life. Baca, convicted on drug charges in 1973, was illiterate until adulthood, but found refuge in books while in prison. He kept notebooks and was soon desperate to start writing poetry of his own. 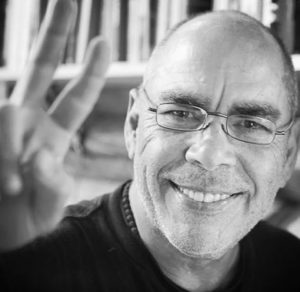 He penned his first pair of poems while still in prison. One was for his grandmother: he wrote to tell her how much he loved her. Another was to his girlfriend: he asked her not to forget him.

“The initial impulse to write poetry came from those two, it came from an act of love,” he said.

He soon became a voracious reader, and was struck by the “ugly truth” that it was mostly poor men of color who were behind bars. “None of us had an education. None of us had representation in court. It was just a system that we found ourselves caught up in and trapped,” he said. “And the wheels spun and it picked us up and spit us out.”

Baca would emerge from the system to find success in literature. He’s since published books of poetry, essays, memoirs and a screenplay and holds a bachelor’s degree and honorary PhD from the University of New Mexico.

In homage to his Chicano and Apache heritage, much of Baca’s literature is rich with language and symbols from the barrios of the American Southwest.

Social justice and advocating for disenfranchised populations are also a central part of Baca’s work. In addition to teaching writing workshops in prisons and schools around the country, Baca also launched a literary nonprofit for at-risk youth, prisoners, former prisoners and disadvantaged communities called Cedar Tree in 2004.

His newest venture, Baca’s Bookmobile, aims to bring books and poetry to schools on native reservations and in underserved areas, where even pencils can be a luxury, he said. The idea came to him when he lived in a small village near Santa Fe, New Mexico.

When all the schools in the area shut down due to money troubles, his children, along with those of more than 12 neighboring villages, had to take a treacherous bus ride through winding canyon roads to get to the only school open three hours away.

“We want to rob their attention for a second, just long enough to give them a damn book.”

Baca donated an RV to the cause, and says that he hopes to put thousands of dollars of books on its shelves. Fresh pozole and tacos will be passed out alongside the literature to bring the students in.

“T.S. Eliot said that if you want to rob a house you gotta bring a steak for the dog,” Baca said. “So we want to rob their attention for a second just long enough to give them a damn book.”

Read the full poem, “It would be neat if with the New Year…” below.

for Miguel
It would be neat if with the New Year
I could leave my loneliness behind with the old year.
My leathery loneliness an old pair of work boots
my dog vigorously head-shakes back and forth in its jaws,
chews on for hours every day in my front yard—
rain, sun, snow, or wind
in bare feet, pondering my poem,
I’d look out my window and see that dirty pair of boots in the yard.

But my happiness depends so much on wearing those boots.

At the end of my day
while I’m in a chair listening to a Mexican corrido
I stare at my boots appreciating:
all the wrong roads we’ve taken, all the drug and whiskey houses
we’ve visited, and as the Mexican singer wails his pain,
I smile at my boots, understanding every note in his voice,
and strangers, when they see my boots rocking back and forth on my
feet
keeping beat to the song, see how
my boots are scuffed, tooth-marked, worn-soled.

I keep wearing them because they fit so good
and I need them, especially when I love so hard,
where I go up those boulder strewn trails,
where flowers crack rocks in their defiant love for the light.

Jimmy Santiago Baca was born in New Mexico in 1952. He was raised by his grandparents but later lived in an orphanage until running away at eleven years old. Then, after living on the streets for nine years, he was convicted of drug possession with intent to sell. It was while in jail that he taught himself to read and write. Once released from jail, Baca went on to write poetry, stories, screen plays, and to lecture around the country. He has a PhD in Literature from the University of New Mexico and is the recipient many awards, including a 1986 NEA Literary Fellowship, the 1987 Vogelstein Foundation Award, and the 1988 Pushcart Prize. He lives in Albuquerque, New Mexico.

Left: Photo by Visions of America/UIG via Getty Images

Who’s arguing the case against Trump? Meet the House managers

Trump heads to Davos as Senate readies for impeachment trial

How students experience and cope with racist stereotypes

By Sharon Austin, The Conversation