Danez Smith sees another life for the black victims of police violence: at last living in a world where blackness is celebrated and “everything/is a sanctuary & nothing is a gun.”

“Summer, somewhere,” the first poem in Smith’s latest collection, “Don’t Call Us Dead,” is a carefully constructed afterlife free from — and built by — a history of racial violence. Smith, who uses the pronoun “they,” centers the book around mortality, a theme they feel intimately connected to, being young, black, queer and HIV-positive.

“To be black and to be queer and to be both of those things at the same time in America, or in the world, is just some difficult stuff,” they said. “It’s beautiful, but other people make it suck.”

An award-winning spoken word artist, Smith’s “Dear White America,” was a biting, cascade of a poem that tackles endemic violence, both physical and emotional, against black bodies. 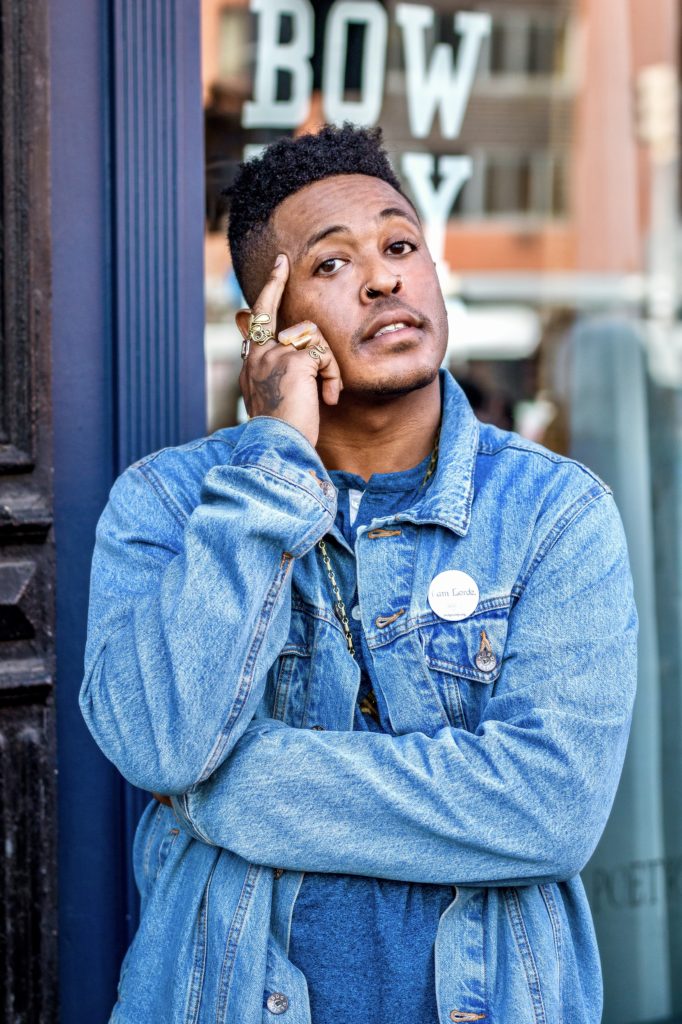 In his new collection, Smith wanted to imagine justice for the victims of “all the little and all the big violences.” He reanimates the bodies and souls of boys lost to “bonefleshed men in blue,” letting them wander in their new paradise, free of blood-drenched clothes, given second chances and new names.

that boy was Trayvon, now called RainKing.
that man Sean named himself I do, I do.

“Five years after Trayvon Martin, what is there to say beyond that he should not be dead? Five years later it still makes no sense,” they said. “And still the events that followed…the fact that George Zimmerman is still free makes no sense and makes complete sense, given what we know of America at the exact same time.”

Smith says they can no longer argue the value of black lives to the large swathes of white America that can’t already see the importance of the struggle against racism and police violence. As long as there are laws and policies still in place that allow this violence to occur, Smith said, history will continue to repeat itself.

And yet, the collection is hopeful, tackling the difficult subjects, but “always holding joy in the other hand,” Smith said.

In another poem from the collection, “dinosaurs in the hood,” Smith’s version of imagined justice comes in the form of a rousing neighborhood of heroes: grannies shoot raptors from the porch and Academy Award-winning actress Viola Davis takes out predators with an afro pick.

his dreams possible, pulsing, & right there.

“All things and poems are about balance,” they said. “A poem is small enough, but also mighty enough to hold many things at one time.”

From “summer, somewhere”
BY DANEZ SMITH

somewhere, a sun. below, boys brown
as rye play the dozens & ball, jump

in the air & stay there. boys become new
moons, gum-dark on all sides, beg bruise

-blue water to fly, at least tide, at least
spit back a father or two. I won’t get started.

history is what it is. it knows what it did.
bad dog. bad blood. bad day to be a boy

color of a July well spent. but here, not earth
not heaven, boys can’t recall their white shirt

turned a ruby gown. here, there is no language
for officer or law, no color to call white.

we say our own names when we pray.
we go out for sweets & come back.

this is how we are born: come morning
after we cypher/feast/hoop, we dig

a new boy from the ground, take
him out his treebox, shake worms

from his braids. sometimes they’ll sing
a trapgod hymn (what a first breath!)

sometimes it’s they eyes who lead
scanning for bonefleshed men in blue.

we say congrats, you’re a boy again!
we give him a durag, a bowl, a second chance.

we send him off to wander for a day
or ever, let him pick his new name.

that boy was Trayvon, now called RainKing.
that man Sean named himself I do, I do.

O, the imagination of a new reborn boy
but most of us settle on alive.

sometimes a boy is born
right out the sky, dropped from

a bridge between starshine & clay.
one boy showed up pulled behind

a truck, a parade for himself
& his wet red gown. years ago

we plucked brothers from branches
unpeeled their naps from bark.

still clutching wicked metals. some boys
waded here through their own blood.

does it matter how he got here if we’re all here
to dance? grab a boy, spin him around.

if he asks for a kiss, kiss him.
if he asks where he is, say gone.

no need for geography
now that we’re safe everywhere.

point to whatever you please
& call it church, home, or sweet love.

paradise is a world where everything
is a sanctuary & nothing is a gun.

here, if it grows it knows its place
in history. yesterday, a poplar

after I fell from its limb
it kissed sap into my wound.

do you know what it’s like to live
someplace that loves you back?

here, everybody wanna be black & is.
look — the forest is a flock of boys

who never got to grow up, blooming
into forever, afros like maple crowns

melting into paper-soft curls, duck
under the mountain for shelter. watch

the mountain reveal itself a boy.
watch Mountain & Forest playing

in the rain, watch the rain melt everything
into a boy with brown eyes & wet naps —

the fields of lavender — brothers
dancing between the storm.

if you press your ear to the dirt
you can hear it hum, not like it’s filled

& other glories. listen to the dirt
crescendo a boy back.

come. celebrate. this
is everyday. every day

year. every year, days get longer.
time clogged with boys. the boys

O the boys. they still come
in droves. the old world

keeps choking them. our new one
can’t stop spitting them out.

the old world, ask him for some lean
-in & you’ll be home. step off him

& walk around your block.
grow wings & fly above your city.

all the guns fire toward heaven.
warning shots mince your feathers.

fall back to the metal-less side
of the mountain, cry if you need to.

that world of laws rendered us into dark
matter. we asked for nothing but our names

in a mouth we’ve known
for decades. some were blessed

to know the mouth.
our decades betrayed us.

there, I drowned, back before, once.
there, I knew how to swim but couldn’t.

there, men stood by shore & watched me blue.
there, I was a dead fish, the river’s prince.

there, I had a face & then I didn’t.
there, my mother cried over me

but I wasn’t there. I was here, by my own
water, singing a song I learned somewhere

south of somewhere worse. that was when
direction mattered. now, everywhere

I am is the center of everything.
I must be the lord of something.

what was I before? a boy? a son?
a warning? a myth? I whistled

now I’m the God of whistling.
I built my Olympia downstream.

you are not welcome here. trust
the trip will kill you. go home.

we earned this paradise
by a death we didn’t deserve.

I am sure there are other heres.
a somewhere for every kind

of somebody, a heaven of brown
girls braiding on golden stoops

but here —
how could I ever explain to you —

someone prayed we’d rest in peace
& here we are

in peace whole all summer

Danez Smith was born St. Paul, Minnesota. They are the author of Don’t Call Us Dead (2017), a finalist for the National Book Award; [insert] Boy (2014), winner of the Lambda Literary Award and the Kate Tufts Discovery Award; and the chapbook hands on ya knees (Penmanship Books, 2013). Smith is the recipient of fellowships from the McKnight Foundation, Cave Canem, Voices of Our Nation (VONA), and elsewhere. They are a founding member of the multigenre, multicultural Dark Noise Collective. Smith is a 2011 Individual World Poetry Slam finalist and the reigning two-time Rustbelt Individual Champion, and was on the 2014 championship team Sad Boy Supper Club. In 2014 they were the festival director for the Brave New Voices International Youth Poetry Slam, and were awarded a Ruth Lilly and Dorothy Sargent Rosenberg Poetry fellowship from the Poetry Foundation. Smith earned a BA from the University of Wisconsin-Madison, where they were a First Wave Urban Arts Scholar. They are a co-host of the Poetry Foundation’s podcast, VS.

Left: Supporters hold hands at a rally against police violence in St. Louis on Aug. 24, 2014. Photo by REUTERS/Adrees