It starts on a playground. A young boy pushes a girl off a swing because he likes her. “Boys will be boys,” a teacher explains. Years later, a boy drinks a bit too much and hits his girlfriend. The same words echo in the girl’s head.

Poet Fortesa Latifi wrote “Why ‘Boys Will Be Boys’ Is The Stupidest Thing You Could Ever Say To A Girl” to expose what she considers an insidious harm that occurs when women are consistently taught to accept male aggression as a form of affection.

“That stupid phrase has made it so women have to carry the weight of male aggression.”

“That phrase gives boys a pass when no one should get a pass,” Latifi explained. “That stupid phrase has made it so women have to carry the weight of male aggression.”

“That phrase” is one we’ve been hearing a lot lately. Last month, Senate Judiciary Committee member Sen. Chris Coons, D-Del., challenged the suggestion that “boys will be boys” could defend now-Supreme Court Justice Brett Kavanaugh against an allegation from college professor Christine Blasey Ford that Kavanaugh sexually assaulted her when they were in high school. (Kavanaugh has vigorously denied the allegation.)

But Latifi, 25, wrote the poem long before the Kavanaugh controversy, or the Harvey Weinstein and Bill Cosby sagas helped to open a global dialogue around issues of sexual, physical and mental abuse known now as #MeToo.

In 2014, Latifi was a college senior. Feeling stifled and struggling through a difficult period in her personal life, Latifi sought solace on the blogging site Tumblr. She found poets her own age blogging about things she understood: feminism, relationships and womanhood. Inspired, she started experimenting with her own writing style and penned “Boys Will be Boys” shortly thereafter.

READ MORE: In Kavanaugh debate, ‘boys will be boys’ is an unscientific excuse for assault

Growing up, trusted adults in Latifi’s life had consistently taught her that “boys will be boys,” and supported what Latifi saw as a culture where violence and aggression were cousins of love and affection.

“Poetry found me when I needed it, when I needed something that belonged to me,” Latifi said. “It was one of the darkest times in my life and I just thought ‘who cares?’ From this nihilist thought I figured I may as well start a blog. Things just took off from there.” Today, the original blog post has 258,750 notes.

The outpouring of public support for “Boys Will be Boys” comes from what Latifi considers a collective reckoning that it was time to shift the status quo, to where women are no longer held responsible for the actions of men, and society could no longer normalize abuse as affection. (There’s also science to back up the claim that it’s a bad excuse.)

“The moment has come. I just wish it had come sooner.”

“We think we’ve come so far, but we hear ‘boys will be boys’ all the time. It feels like we’re poisoning little boys, telling them that aggression is okay,” she said. “It’s decades and generations of trauma and it starts so young, but it doesn’t end.”

When #MeToo erupted into a movement one year ago, Latifi didn’t see an end to harassment and abuse, but rather a new beginning for society.

“Twenty-year-old me could never have imagined a cultural shift like #MeToo,” Latifi said. “I hope this poem can find a new place in 2018 that wasn’t available in 2014. The moment has come. I just wish it had come sooner.”

when she was 7, a boy pushed her on the playground
she fell headfirst into the dirt and came up with a mouthful of gravel and lines of blood chasing each other down her legs
when she told her teacher what happened, she laughed and said ‘boys will be boys honey don’t let it bother you
he probably just thinks you’re cute’
but the thing is,
when you tell a little girl who has rocks in her teeth and scabs on her knees that hurt and attention are the same
you teach her that boys show their affection through aggression
and she grows into a young woman who constantly mistakes the two
because no one ever taught her the difference
‘boys will be boys’
turns into
‘that’s how he shows his love’
and bruises start to feel like the imprint of lips
she goes to school with a busted mouth in high school and says she was hit with a basketball instead of his fist
the one adult she tells scolds her
‘you know he loses his temper easily
why the hell did you have to provoke him?’
so she shrinks
folds into herself, flinches every time a man raises his voice
by the time she’s 16 she’s learned her job well
be quiet, be soft, be easy
don’t give him a reason
but for all her efforts, he still finds one
‘boys will be boys’ rings in her head
‘boys will be boys
he doesn’t mean it
he can’t help it’
she’s 7 years old on the playground again
with a mouth full of rocks and blood that tastes like copper love
because boys will be boys baby don’t you know
that’s just how he shows he cares
she’s 18 now and they’re drunk
in the split second it takes for her words to enter his ears they’re ruined
like a glass heirloom being dropped between the hands of generations
she meant them to open his arms but they curl his fists and suddenly his hands are on her and her head hits the wall and all of the goddamn words in the world couldn’t save them in this moment
she touches the bruise the next day
boys will be boys
aggression, affection, violence, love
how does she separate them when she learned so early that they’re inextricably bound, tangled in a constant tug-of-war
she draws tally marks on her walls ratios of kisses to bruises
one entire side of her bedroom turns purple, one entire side of her body
boys will be boys will be boys will be boys
when she’s 20, a boy touches her hips and she jumps
he asks her who the hell taught her to be scared like that and she wants to laugh
doesn’t he know that boys will be boys?
it took her 13 years to unlearn that lesson from the playground
so I guess what I’m trying to say is
i will talk until my voice is hoarse so that my little sister understands that aggression and affection are two entirely separate things
baby they exist in different universes
my niece can’t even speak yet but I think I’ll start with her now
don’t ever accept the excuse that boys will be boys
don’t ever let him put his hands on you like that
if you see hate blazing in his eyes don’t you ever confuse it with love
baby love won’t hurt when it comes
you won’t have to hide it under long sleeves during the summer
and
the only reason he should ever reach out his hand
is to hold yours” 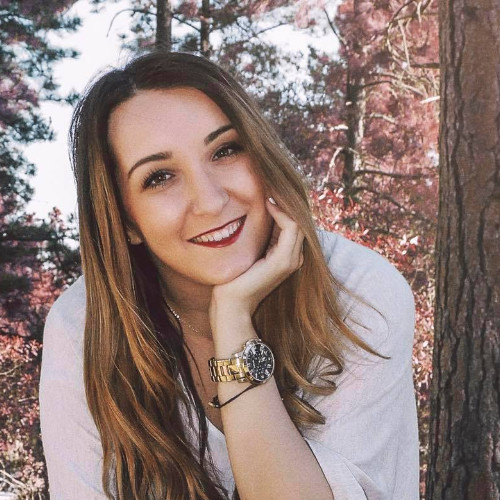 Fortesa Latifi is a poet/writer/bibliophile. She is trying her best. Her book “This Is How We Find Each Other” was published through Where Are You Press in December 2014. Her work has also been published in Persona and Words Dance. She couldn’t stop writing if she tried.