Poet Analicia Sotelo penned her latest collection to upend tropes of the helpless damsel, inspired by an Italian painter’s dream-like depiction of womanly strength in the throes of vulnerability.

In Giorgio de Chirico’s 1913 painting, a sculpture of slumbering Ariadne lies among long shadows in an empty courtyard. According to Greek myth, she helped Theseus defeat the Minotaur and — forsaking her family — runs away with him. The last thing she sees of her lover is his ship as it sails away, abandoning her as she sleeps. And like the ill-fated princess left behind on distant shores by an ungrateful hero, Sotelo’s women deal with desires tempered by abandonment and toxic masculinity.

Sotelo said she was fascinated by Ariadne’s complicated strength, as well as the dichotomy between what it means to be masculine versus feminine. These are threads she follows in a number of poems in the collection, including “Ariadne Plays the Physician:”

Theseus,
you know you didn’t break me.

I was the one who came to you
with a magnifying glass,

for the University of Someone Wants Me:
my gold-sealed social stigma.

Sotelo’s book is called “Virgin,” a term that she said is used to imply someone is either religious or ignorant of the ways of the world — reductive assumptions that Sotelo, part of a close-knit Mexican-American family, said she faces often.

“I tend to have a very nice demeanor, and so when I meet people and start talking to them, a lot of people would assume that I didn’t know things simply because I came from a Catholic background,” she said. “That made me want to show what the inside of my brain was like in a poetic fashion.”

For a few poems in “Virgin,” the dynamic between desire and masculinity comes in the form of the absent father. In “My Father & Dalí Do Not Agree,” Sotelo’s themes of Surrealism and fatherhood intersect. 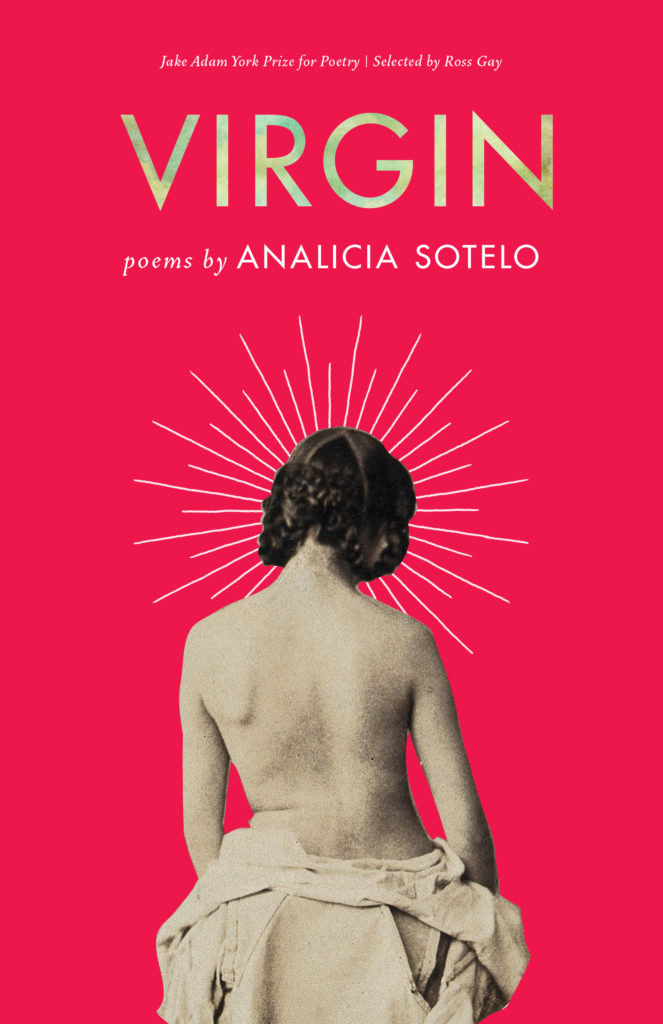 “A lot of young women and young men…grow up without a father, and so I was also trying to connect that with trouble with relationships later on,” Sotelo said. “And looking for a way of fashioning one’s own identity when there’s sort of this missing piece.”

Her work challenges the two-dimensional feminine stereotype by infusing her female voices, including Ariadne’s, with intellect, wisdom and complications. In “My Mother as the Voice of Kahlo,” a strong woman embodies the wisdom of the iconic Mexican artist Frida Kahlo, passing it on to an insecure daughter.

But the book can also be interpreted more broadly as an examination of how we judge — and misunderstand — others.

“[There’s] much more to a person’s life than what we assume about them and I think that’s really the core of why I write,” she said. “Who are we really as humans and how do we really relate to each other? What are we assuming? What what surprises us?”

Read Sotelo’s “My Mother as the Voice of Kahlo” below.

My Mother as the Voice of Kahlo

I am fourteen & feeling ugly

with nine arrows in her body
alive bleeding

Her grief is constant & irreparable

like the crown of fresh flowers
she killed each day

See all men are in love with themselves

& even an artist
will leave his wife behind

Analicia Sotelo is the author of “Virgin,” the inaugural winner of the Jake Adam York Prize, selected by Ross Gay, to be published by Milkweed Editions in February 2018. She is also the author of the chapbook, “Nonstop Godhead,” selected by Rigoberto González for a 2016 Poetry Society of America National Chapbook Fellowship. Her poem “I’m Trying to Write a Poem About a Virgin and It’s Awful” was selected for Best New Poets 2015 by Tracy K. Smith. Poems have also appeared or are forthcoming in the New Yorker, Boston Review, FIELD, Kenyon Review, New England Review, and The Antioch Review. She is the 2016 DISQUIET International Literary Prize winner in poetry and is the recipient of scholarships from the Community of Writers at Squaw Valley and the Image Text Ithaca Symposium. She holds a BA in English literature from Trinity University and an MFA in poetry from the University of Houston. She works for Writers in the Schools.