When poets Geffrey Davis and F. Douglas Brown first met at a poetry retreat in 2012, they instantly connected in discussing fatherhood and the poetry that sprang from that experience. Over time, that relationship grew, and they began writing poetry that came directly out of their conversations. Soon, they were even borrowing each other’s lines or writing stanzas or whole poems back and forth, as a kind of call and response.

And in November, they published their first series of co-written poems, in a chapbook called “Begotten,” which was published by Upper Rubber books. These poems explore with tenderness and anxiety the joys and perils of being a father — especially a black father — and how to escape the mistakes of past generations.

“We like to say that we kind of beg, borrow and steal,” said Brown. “We beg one another to become better fathers, through the work and our conversations. We borrow from the things we are reading, and other people who are working with the same themes. And we steal from one another.”

Davis, who is 33 and has a five-year-old son, said that as a younger father he has often looked to Brown, who is 44 and has two teenaged children, a son and daughter, for answers. “I felt blessed to have this chance to cultivate questions about doubts, worries, and wonders about what it means to be a father,” said Davis, both in conversations with Brown, and in their resulting poetry.

In “Begotten,” many of the poems look forward, to convey advice to a son, or explore how a father can best help a child navigate racism or understand sexuality. Others look backwards, to their own fathers and the fears they have of inheriting the violence that came before. A number of the poems do both.

“In that first conversation we had, we talked about the expectation of what the black father is supposed to do or has not done,” said Brown. “And I think we work against that. People always ask about the vulnerability in our poems, because that is something not readily shown in African American fathers. That, and the love we have offer.”

Both love and vulnerability are present in the poem “What I Mean When I Say Harmony,” though toughness also makes an appearance. Its first line is: “dear boy be the muscle: / make music to the bone.” Centering around touch and violence, the poem is addressed in parts to both a father and a son.

In the fourth and fifth stanzas of the poem, there is the echo of a worried parent: “If I ever / catch you confusing / a pulse for a path or a bridge / to beat loneliness you blood / will be the object of discussion.” This line, Davis said, came from the memory of his mother telling him not to engage in the same violence his father did.

The larger poem is about passing a similar message on to his son. “It’s about needing to push my son not to be afraid of contact, but also to understand the risks that are involved,” said Davis.

“It’s that fear doesn’t have to be met with the same violence,” echoed Brown.

Read that poem, and listen to Brown and Davis read it aloud, below. 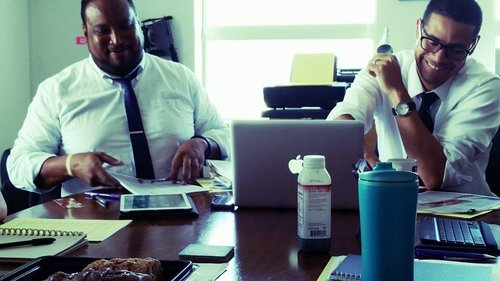 What I Mean When I Say Harmony

1.
dear boy be the muscle:
make music to the bone—risk

who touch a body and leave it
graceful be that kind

of wonder —and if I ever
catch you confusing

if only to rekindle the song
carried in your hands

2. The Remix
ode to the boy in me singing at the table so rude
but the hum-a-long mingles with your husky laughter

ode to the father in you wringing something out of nothing
ode to [dutiful] stitched into your fingers and not:—[obligatory drudgery]

3. Side B
dear boy aint nothing
not about bodies

to gasp inside the heat
and arms of praise

worship the warmth
of each loaded light let your body

of your desire hold it
in your mouth let it live

The “Begotten” chapbook appears in the third volume of the Floodgate Poetry Series, an annual series of books by Upper Rubber Boot Books.

Geffrey Davis is the author of Revising the Storm (BOA Editions 2014), winner of the A. Poulin, Jr. Poetry Prize and a Hurston/Wright Legacy Award Finalist. Davis’ honors include fellowships from the Cave Canem Foundation and the Vermont Studio Center, the Anne Halley Poetry Prize, the Dogwood Prize in Poetry, the Wabash Prize for Poetry, the Leonard Steinberg Memorial/Academy of American Poets Prize, and nominations for the Pushcart Prize. His poems are forthcoming or have been published by The Academy of American Poets, Crazyhorse, The Greensboro Review, Hayden’s Ferry Review, The Massachusetts Review, Mississippi Review, New South, The New York Times Magazine, Nimrod International Journal, and Ploughshares, among other places. Originally from the Pacific Northwest, Davis teaches in the MFA Program at the University of Arkansas.