Sister’s worry over another deployment inspires this Veterans Day poem

Gretchen Marquette says she remembers very clearly when she wrote the poem. Her younger brother had called the night before to tell her he was going to be deployed to Afghanistan, just months after he had returned from Iraq. She said news of a new deployment devastated her.

“It was very difficult for me to think of him being in peril — his body and his mind being in peril. But also to think that he would be asked to do things that were contrary to his nature.”

“People say nice things like ‘I’m sure he’ll be fine.’ But you don’t know he’ll be fine. That’s the rub. To sit with that kind of worry for so long is really damaging.”

Marquette says her brother has always been a gentle, generous soul. When he gave her his old iPod, she was surprised to see that he repeatedly listened to Beethoven’s “Moonlight Sonata” and some love songs while he was deployed.

“My brother is six years younger than I am and was 12 when I left home. So he is still a boy to me. Yet now he’s in these foreign countries with a gun across his back. That’s just not who my brother is.” 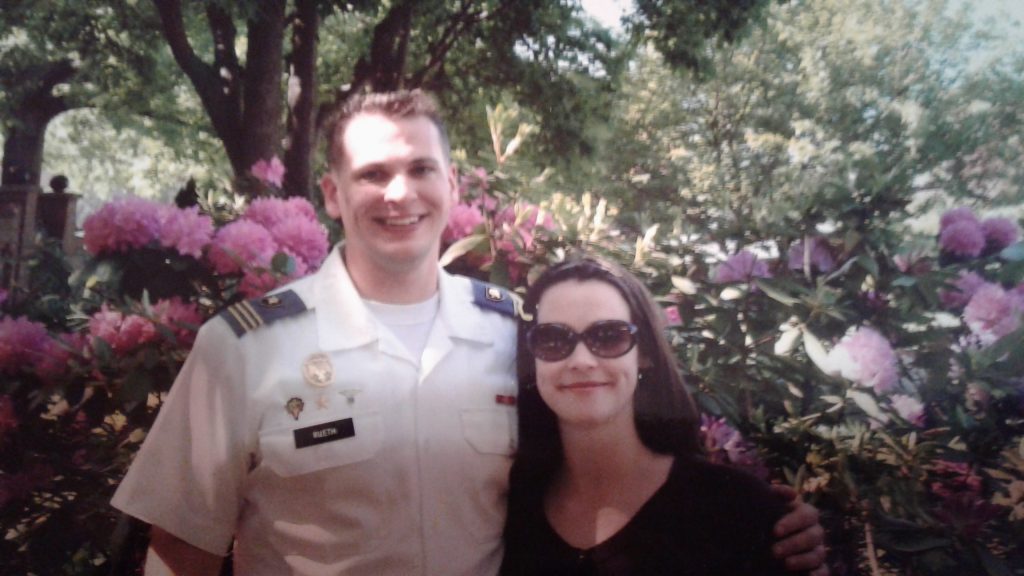 Poet Gretchen Marquette with her brother. Photo courtesy the author.

Marquette comes from a family who has long served in the military. Her grandmother was in the women’s Marine Corps during World War II and her father was in the Army during the Vietnam War. She says people who don’t have family members in the military don’t really understand the anxiety that is experienced by the loved ones at home.

“There’s this weight on you and nothing you can do. There’s no guarantee they’ll be safe. People say nice things like ‘I’m sure he’ll be fine.’ But you don’t know he’ll be fine. That’s the rub. To sit with that kind of worry for so long is really damaging.”

Read next: How a WWII pilot explained the quiet moments after an enemy attack

“Boy” is one of several poems that Marquette wrote about her brother’s deployment in her debut collection, “May Day,” which was just published by Graywolf Press. When she goes to poetry readings, she says those are the poems that most people respond to.

“There’s no real resolution in the book so many people come up to me and ask, ‘Did your brother make it home?’ It’s as if they need to know before they can go home. I’m happy to report that my brother did make it home safely, but I still have anxiety that he could be deployed again.”

Last night the phone rang.
My brother said, Afghanistan. December.
He hadn’t begun to tell us about Iraq yet.
Let’s not dwell on it, he said,
meaning Afghanistan.

My brother sent pictures last year,
from Iraq–mostly of himself
petting stray dogs, though in one photo
his eye looks bruised.

I had to accept: a weapon moves
through another country
on the back of my brother,
whose head is full of glum
love songs.

It wasn’t just the heat, it was
the aridity. I’m trying to plant some grass,
he said. Something green. We sent it
across the ocean as seeds. It’s so
dry here, he said. I can’t explain.

As kids we spent summers
in lakes, in rivers, in pools.
My brother was first to dive,
no matter how cold the water.
No one flinched if it took time
for him to surface. We trusted
his body’s ascension,
that before long, we’d see
his ecstatic face.

“Boy” © 2016 by Gretchen Marquette. Reprinted from May Day: Poems with the permission of Graywolf Press, Minneapolis, Minnesota.

Gretchen Marquette has published poems in Harper’s and Paris Review. She has served as the assistant poetry editor for Water Stone Review, and as a first reader for the National Poetry Series. Marquette was a 2014 recipient of a Minnesota Emerging Writer Grant from the Loft Literary Center. “May Day” is her first collection of poetry. She lives and teaches in Minneapolis.