Listen to Charlotte Boulay read “Oracular” from her debut collection, “Foxes on the Trampoline.”

The road is too hot to move. I’m stuck in the median,
I slept too fast & then too slow.

who loves the saints in the streets? We don’t need

your love, only your briefest notice sustains us.
Dogs crouch in the ancient of their shade,

tooth-brushers spit into their crevices, piss in the gutters
they create.
Bedtime—stars like mustard seeds pop

through the smog. There’s a wail & an anguish of horns;

everlastingness reaches up & turns out the light— 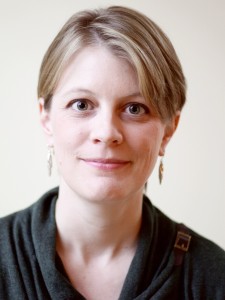 Charlotte Boulay earned her MFA from the University of Michigan. She taught creative writing at the university for five years and won both the Meijer Award and an Academy of American Poets Award. Her poetry has appeared in many journals, including The New Yorker, Slate, the Boston Review and Crazyhorse. Boulay currently works as a grant writer at The Franklin Institute Science Museum in Philadelphia, where she lives with her husband. “Foxes on the Trampoline” is her first book of poetry.