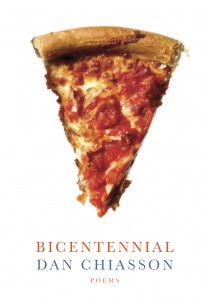 Poet Dan Chiasson started working on his book “Bicentennial” after the death of his father, who left when Chiasson was 7 months old. While the two never really knew each other, that event prompted Chiasson to revisit his childhood in a series of poems that play with memory and a sense of time.

“I feel like, almost in an H. G. Wells way, poems are like a time machine. You can go back and bring the past to life again. So that’s what I did, what I tried to do … I’m looking back at myself as a child looking forward in time.”

Chiasson’s memory was jogged by writing the poems for the collection. The more he drew on his experience, the better he was able to remember the past.

“I could look around and have memories that I hadn’t revisited in a long time anyway. I did feel like actually traveling back in time a bit.”

One such memory occurred when Chiasson was 8 years old.

Growing up in Vermont, he was a big Red Sox fan. One of his poems from the new collection, “Star Catcher,” remembers the day that the legendary Yankees player Thurman Munson died in a plane crash.

“I was 8 years old and it was a summer day, of course, and I was at a pool. The news came on and I remember, my friend and I, because we were such Red Sox fans, our first reaction was that we were happy.”

We felt like dying when the Yankees won.
In 1979, they seemed to win all summer.
Our luck changed when the plane went down.
My friend was born because his brother drowned.
We rode robin’s egg bikes alongside each other.
We felt like dying when the Yankees won.
Time, that is huge at the start of the season,
By August grows smaller and smaller;
The clock stopped when the plane went down.
The logic of loss, we could all understand:
Every fan trusts that losing is barter.
Though we wanted to die when the Yankees won,
We knew that all losers eventually win,
Every drowned brother results in another:
As the plane goes down, so goes Thurman Munson.
Now Tommy John, Ron Guidry, and the whole rotation,
Whenever they pitched would pitch to air.
The star catcher was gone. Even if the Yankees won,
They’d lost their catcher, their star: Thurman Munson.

Chiasson is horrified by that reaction now.

“One of the things I’m interested in, especially with two boys of my own now, is how empathy kind of develops late in kids. I think I didn’t have any at that point, I was just such a fan. I could only see it as a good thing, as a benefit.”

Memory is tricky. It changes over time and based on who is recalling that specific moment. Since many of the poems feature his own children, Chaisson knows they will now have a very different conception of their own boyhood.

“I’ve changed their childhood in a way by writing about it. They’re going to have these poems to look at. It will literally affect what they remember.”

And why choose a pizza slice for the book cover?

“It struck me as so iconic for boyhood and adolescence, ordering pizza. It’s weirdly patriotic. The image looks red and white and there’s blue text,” Chiasson told Art Beat. “I thought the title, once I’d chosen it, you couldn’t have a flag or fireworks or something. You needed something that was at an angle to the title, so I thought (the pizza slice) was weird and cool and I just went with it.”

“Star Catcher” excerpted from Bicentennial by Dan Chiasson. Copyright © 2014 by Dan Chiasson. Excerpted by permission of Knopf, a division of Random House LLC. All rights reserved. No part of this excerpt may be reproduced or reprinted without permission in writing from the publisher.