The Body
By Dexter L. Booth

They split the hog down the middle.

It was cold and raining, I remember
the steam and the knife and the squeal and how

they all left the body like a ghost.
They lasted and lasted and the body shook
in your hands. I was
told this is sex my friend,

Take care to roll it
like a swollen log
pushed up from the belly
of the river. Gently turning
it over, take note of the red
ants harvesting what is left
beneath the bark.

Be gentle. It might all just fall apart at your touch.

But I know little of the shape of a breast,
perhaps that it curves like a spoon on the tongue.
Your mother had one breast.
I touched it
once. It was a dare

and I was promised
it was the only way
to become a man.

No one thought to call the police.

They ran when she began coughing
up blood. I opened her shirt,
pushed on her nipple like an alarm.

It was the time
your sister danced up
and down the aisles in church.
She was possessed
by some ghost,
a beast built like your father.

There was dinner:
white bread and someone’s blood.
They dipped her in the water

and your father said she was clean. 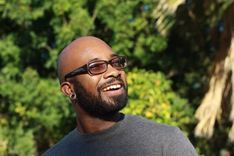 Dexter L. Booth, born in 1986, earned an MFA in creative writing from Arizona State University. His poems have appeared in Amendement, Grist, the New Delta Review, and Willow Springs. His debut collection, “Scratching the Ghost,” is the winner of the Cave Canem Poetry Prize, selected by Major Jackson. He lives in Tempe, Ariz.

“The Body” copyright © 2013 by Dexter L. Booth. Reprinted from “Scratching the Ghost” with the permission of Graywolf Press.