Poet posits, ‘We humans, we’re kind of a disappointment’

Listen to J. Allyn Rosser read “As If” from her new collection, “Mimi’s Trapeze.” In the poem, Rosser “contemplates humanity as not quite worthy of the world,” she told Art Beat in December. “We humans, we’re kind of a disappointment. We’re always desiring, we’re never satisfied, we’re cruel sometimes. Maybe we’re not getting the point we were put here to get.”

How do you explain why elephants
appear to move their unwieldy hulks
with greater dignity than most humans do
in their finest moments,
as if they had evolved beyond wanting
anything but what they have?
Why does the field begin to ripple
before the wind arrives in whispers,
as if there were a communication,
as if the landscape were poorly dubbed,
and we weren’t expected to notice?
What butterfly does not dart away from us,
as if it could sense our latent cruelties,
and yet return to check and double-check?
Has the night not gotten recently darker,
as if to insinuate that we have squandered
the light that was there?
Have we made too much of our own kind?
And did you notice afterward the dawn
opening up with a tentative eagerness,
as if there were something crucial to illumine,
as if we would wake up early just to see it?
I imagine you reading this now
with an expression of quiet trouble
itself troubled by currents of hope,
as if you imagined me here with you,
as if I might be able to see your expression
and at least answer it with mine. 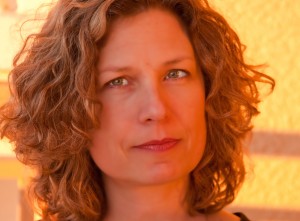 “Mimi’s Trapeze” is J. Allyn Rosser’s fourth book of poetry. Her previous collections include “Bright Moves,” which was awarded the Morse Poetry Prize, “Misery Prefigured,” winner of the Crab Orchard Award in 2001 and “Foiled Again,” for which she won the New Criterion Poetry Prize in 2007. Rosser has published her poems in numerous periodicals, including The Atlantic Monthly, Poetry and Ninth Letter, and has been awarded fellowships from the Guggenheim and Lannan Foundations. She is an associate professor of English at Ohio University and an editor-in-chief of New Ohio Review.

“As If” from “Mimi’s Trapeze,” by J. Allyn Rosser, © 2014. Used by permission of the University of Pittsburgh Press.